- consumers in the U.S. spent $2.251 billion on gaming-related products online and at U.S. retailers in November 2019

- this is 19% down from the same period in 2018
- year-to-date spending has fallen 12%when compared to 2018, to $11.6 billion
- dollar sales of tracked video game software declined 14% in November compared to a year ago, to $926 million
- year-to-date sales have fallen 8% to $5.4 billion
- gains in software spending on Switch have not offset declines across other platforms
pokemon
“Pokémon Sword and Pokémon Shield rank as the No. 3 and No. 5 best-selling titles of November, respectively, while the Pokémon Sword and Pokéemon Shield Double Pack places as the No. 4 best-selling game of the month. These titles combine to achieve the highest launch month dollar sales of any Pokémon release in U.S. history, topping the previous launch month high set by Pokemon Sun and Pokemon Moon. Were all versions of Pokémon Sword and Pokémon Shield combined, the aggregate total would place as the #2 best-selling in November.”
Super Smash Bros. Ultimate
“Super Smash Bros Ultimate is now the best-selling Fighting game in U.S. history, with a lifetime dollar sales total surpassing that of the previous best-selling Fighting game, Super Smash Bros. Brawl.”
Switch hardware
“Nintendo Switch was again the best-selling hardware platform of November and remains the best-selling platform of 2019.
Hardware spending in November 2019 declined 26 percent when compared to a year ago, to $891 million. Year-to-date hardware spending has fallen 24 percent versus year ago, to $2.9 billion.” 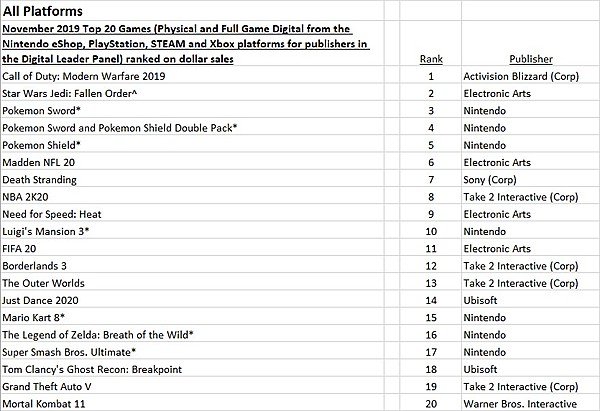 Death Stranding did well in November. Ranks amongst the top 10 in U.S. launch month full game dollar sales for a Sony published title in history. Source: The NPD Group