Atelier Liddy and Soeur: Alchemists of the Mysterious Painting will launch for PlayStation 4, Switch, and PS Vita this winter in Japan, the latest issue of Famitsu reveals. It will cost 7,300 yen on PlayStation 4 and Switch, and 6,300 yen on PS Vita. A limited edition will also be available for 10,300 yen and 9,300 yen, respectively.

The game features two protagonists. Players will not choose between them, however:

Liddy and Soeur are twin sisters who run a small atelier in Melveille, the capital city of the Adalett Kingdom. One of the paintings they discover has a mysterious world within it.

The latest Atelier game is an adventure inside a painting. The synthesis system has seen a dramatic evolution with the introduction of “activation items.” Battles are “combination battles” where characters fight in pairs, and during which synthesis is also possible. 3D models have also significantly evolved. 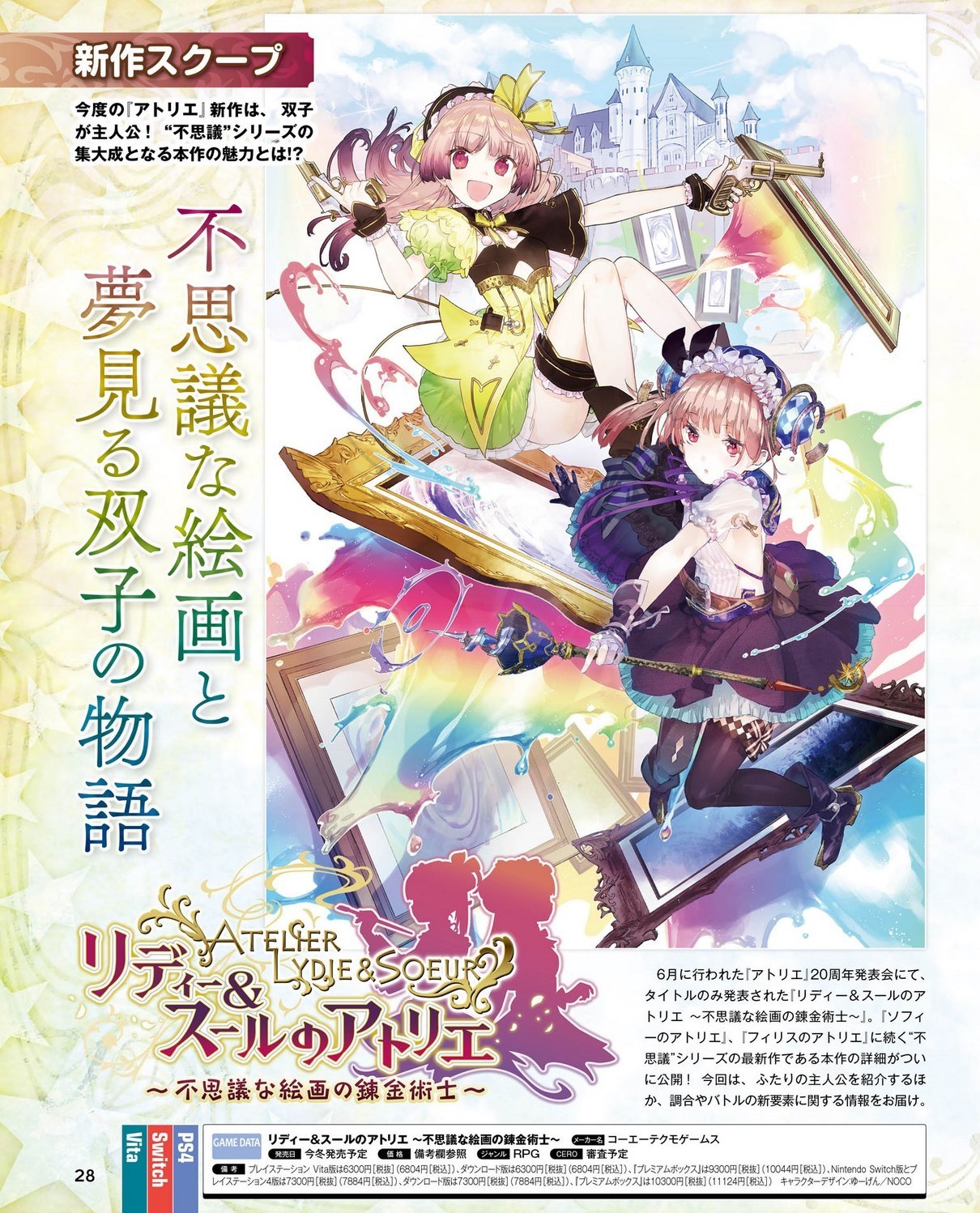 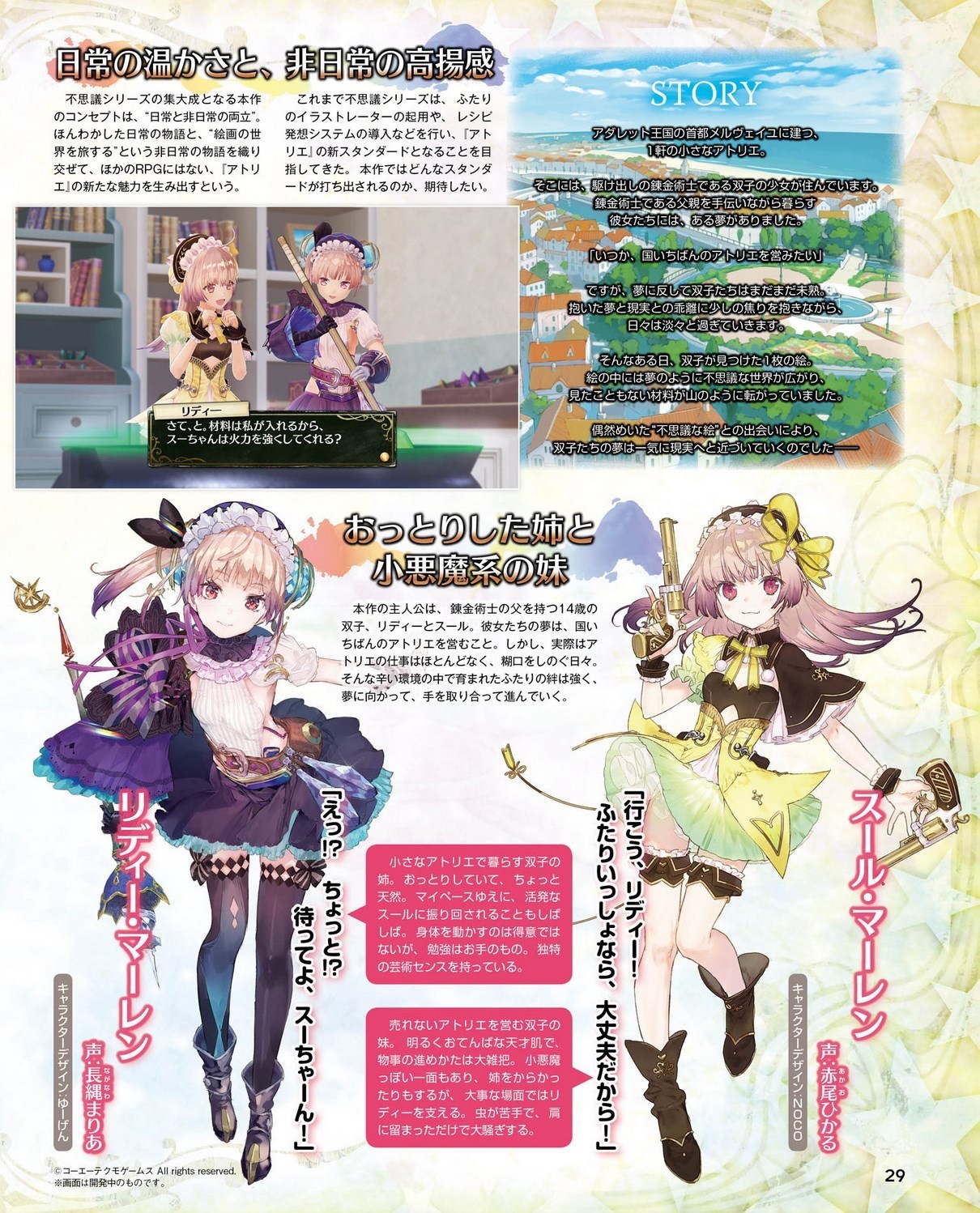 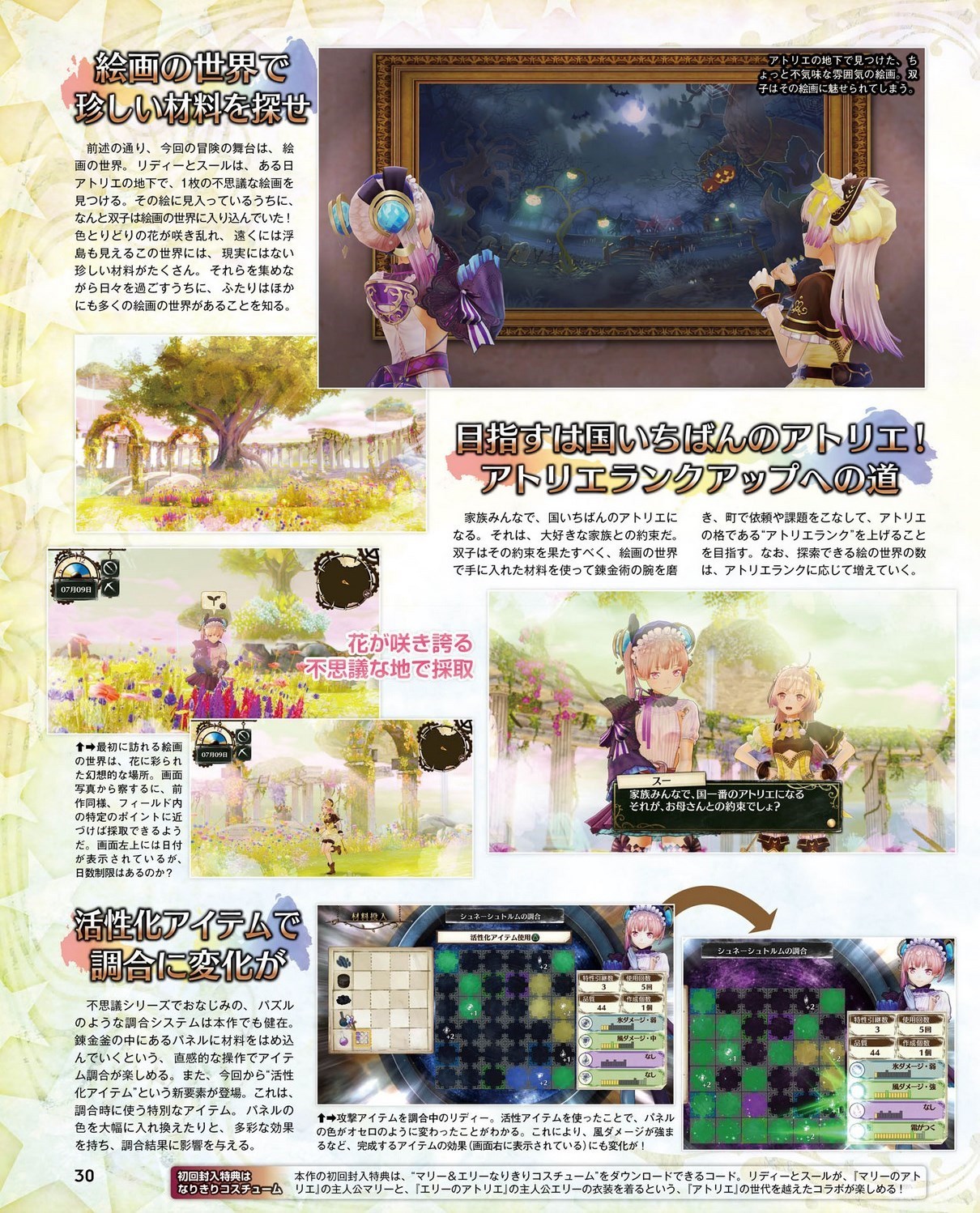 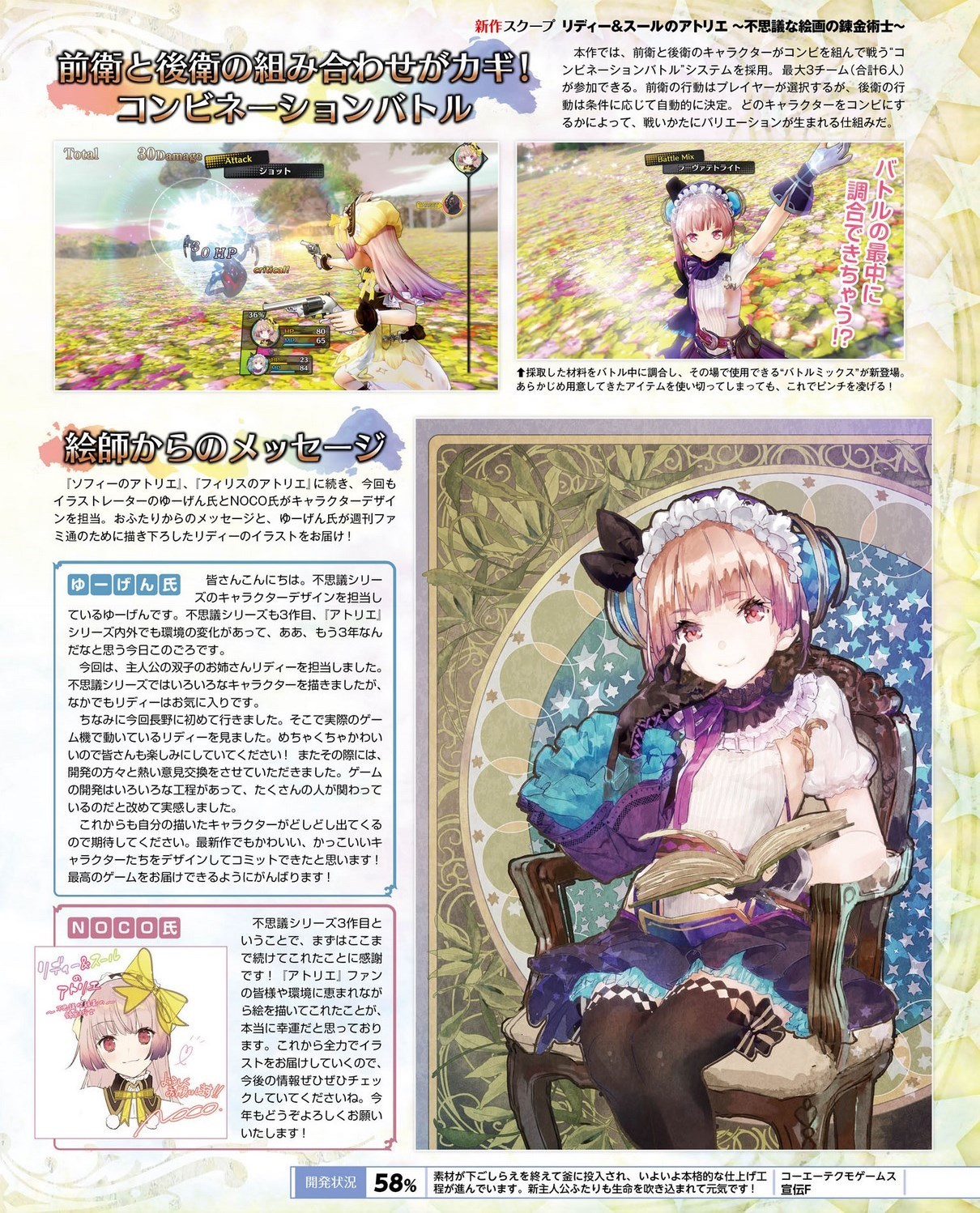 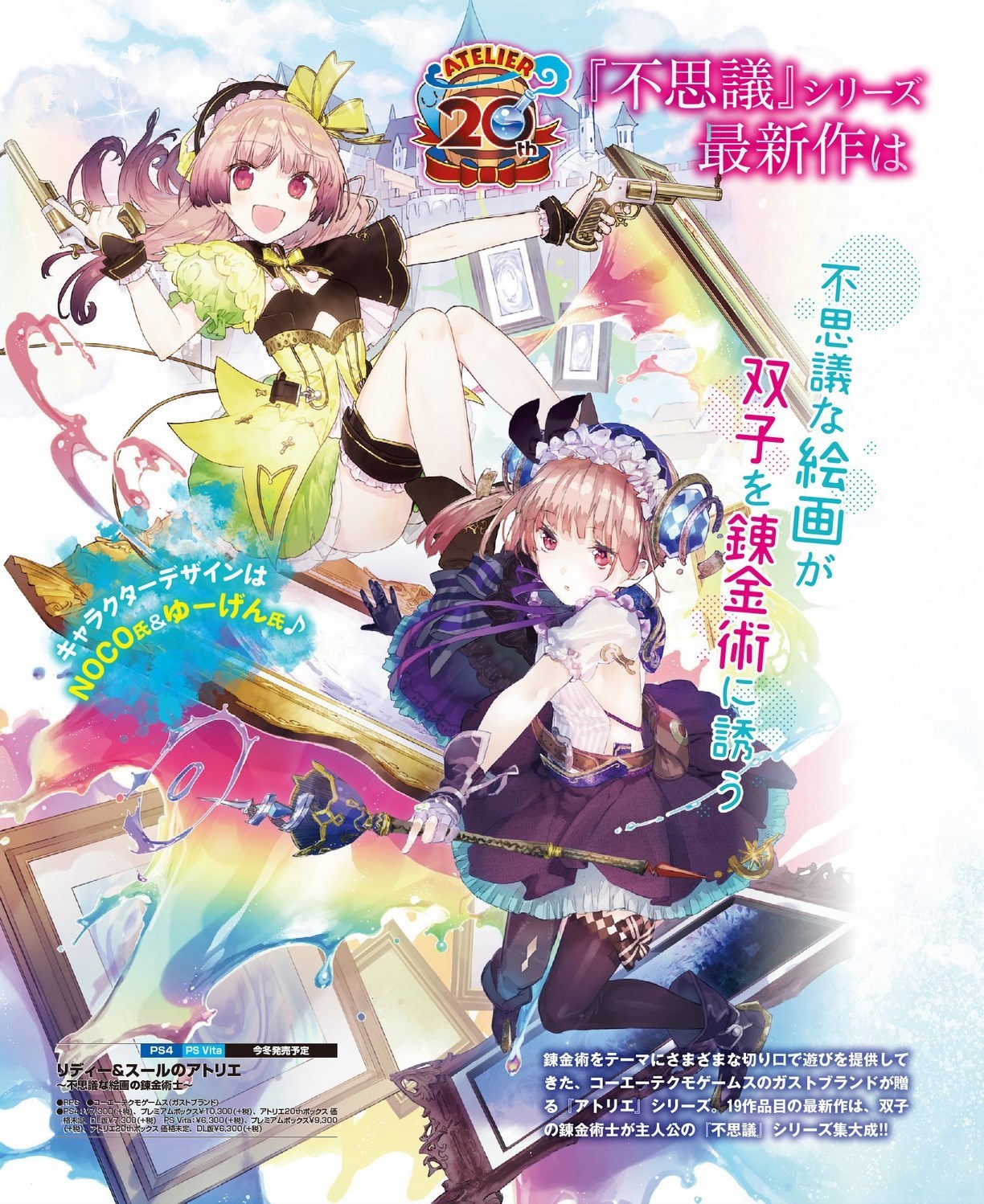 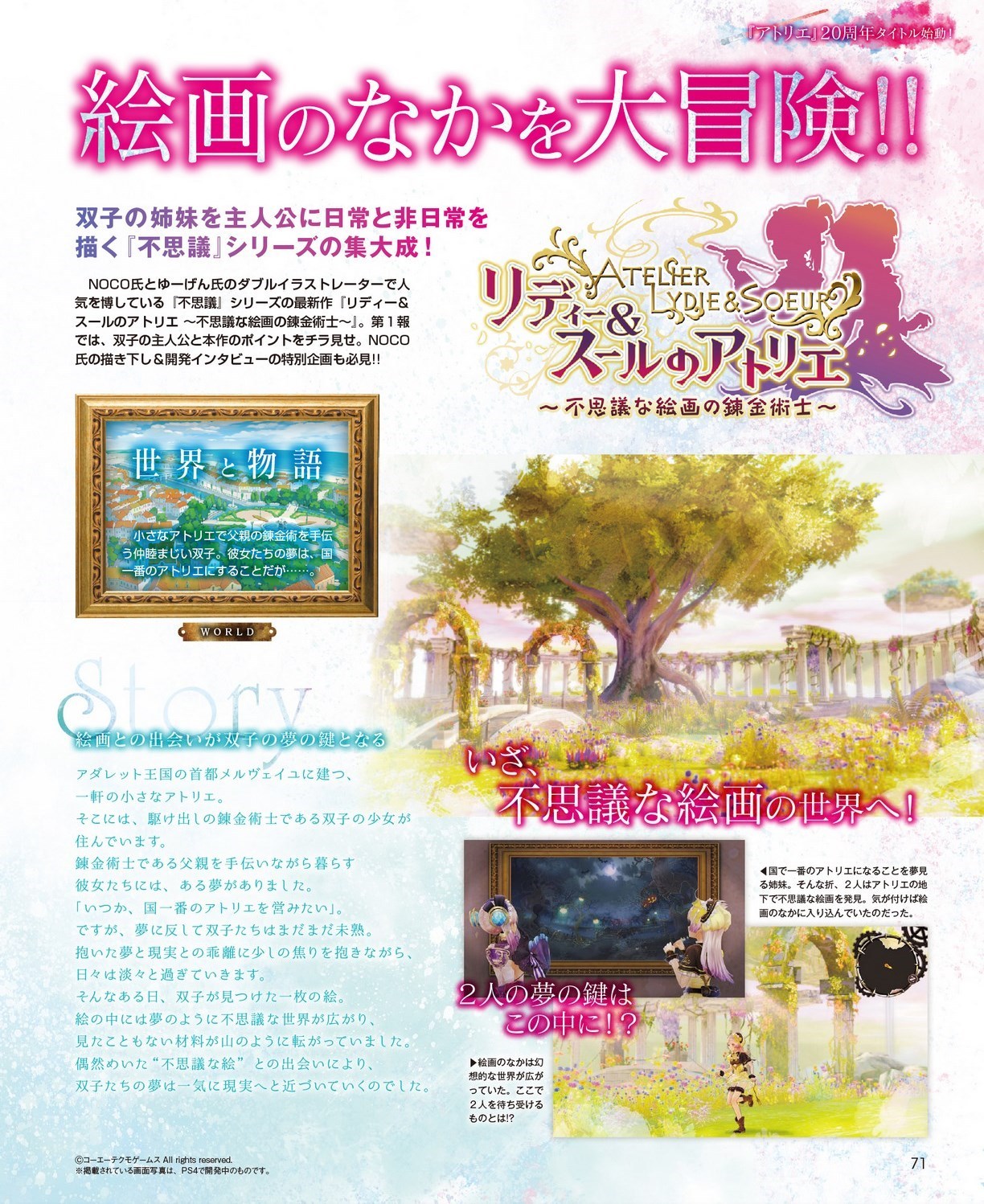 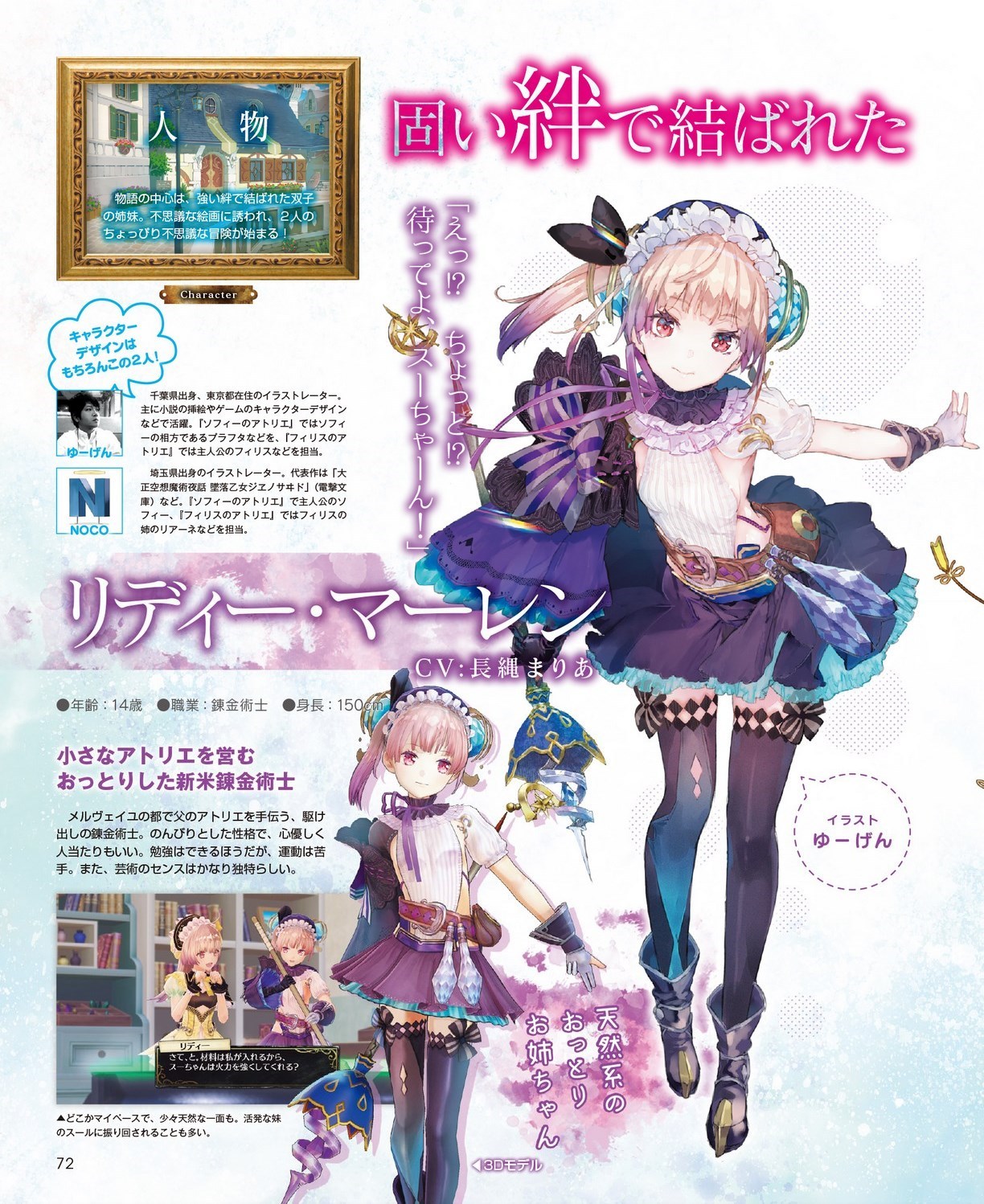 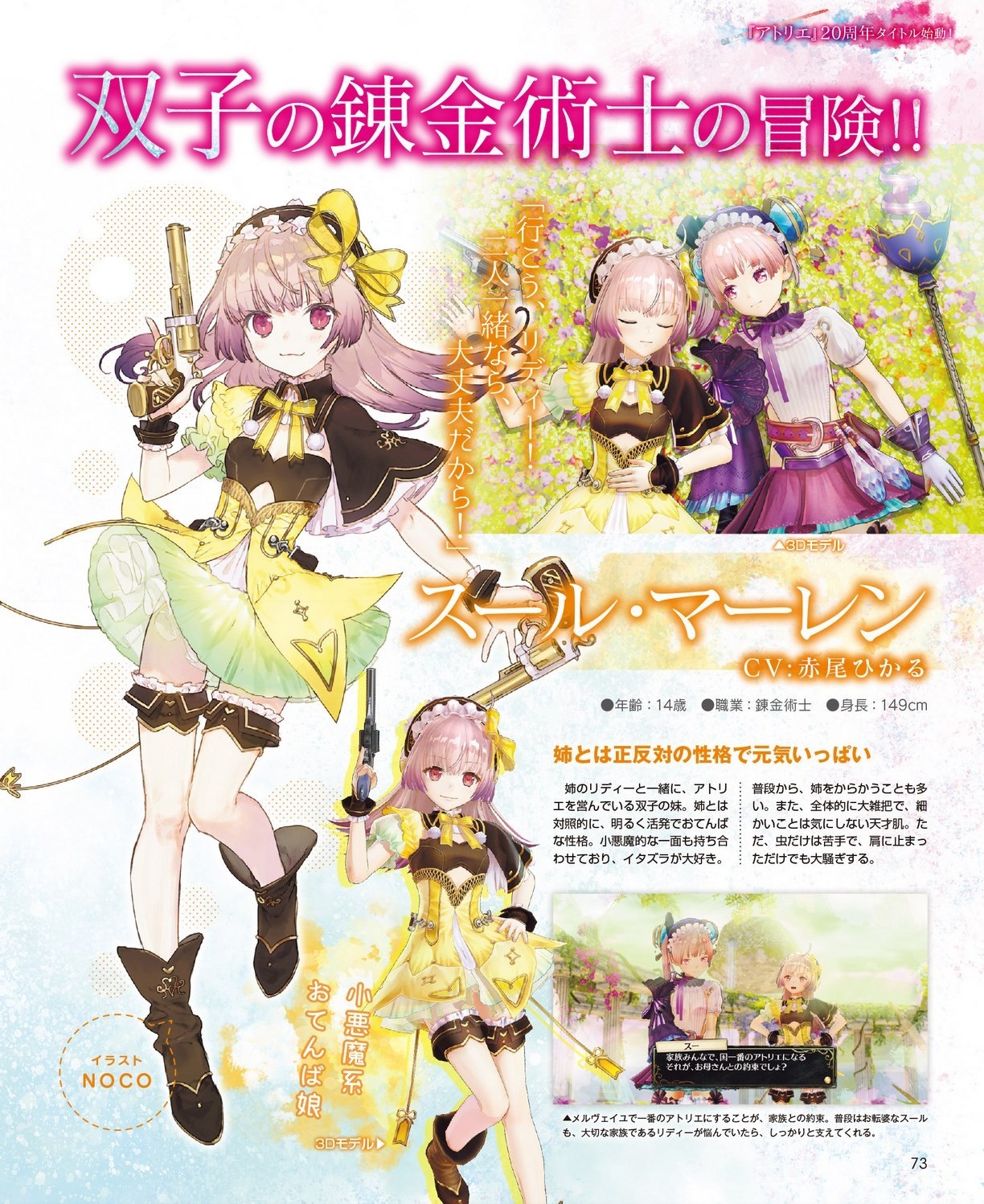 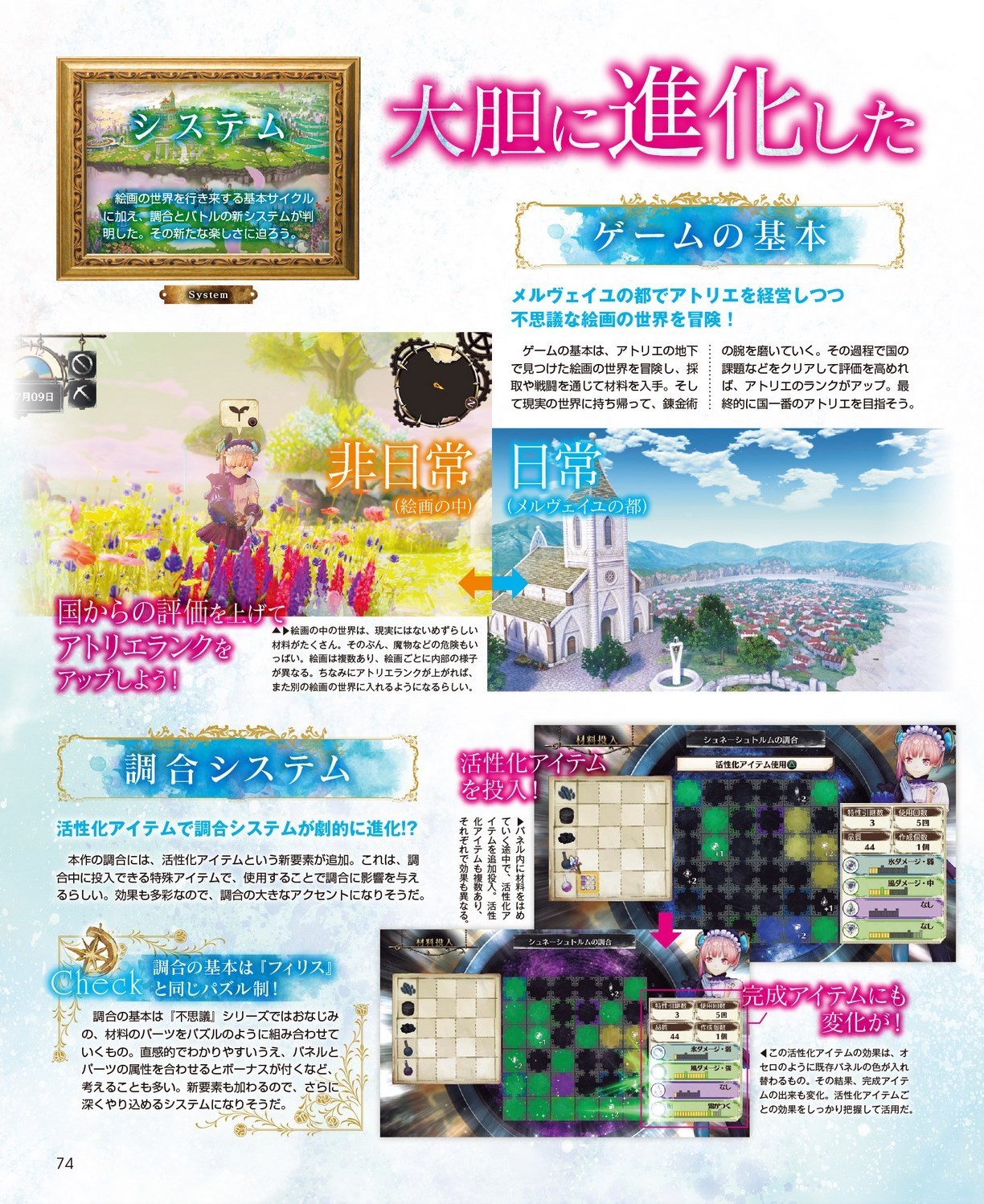 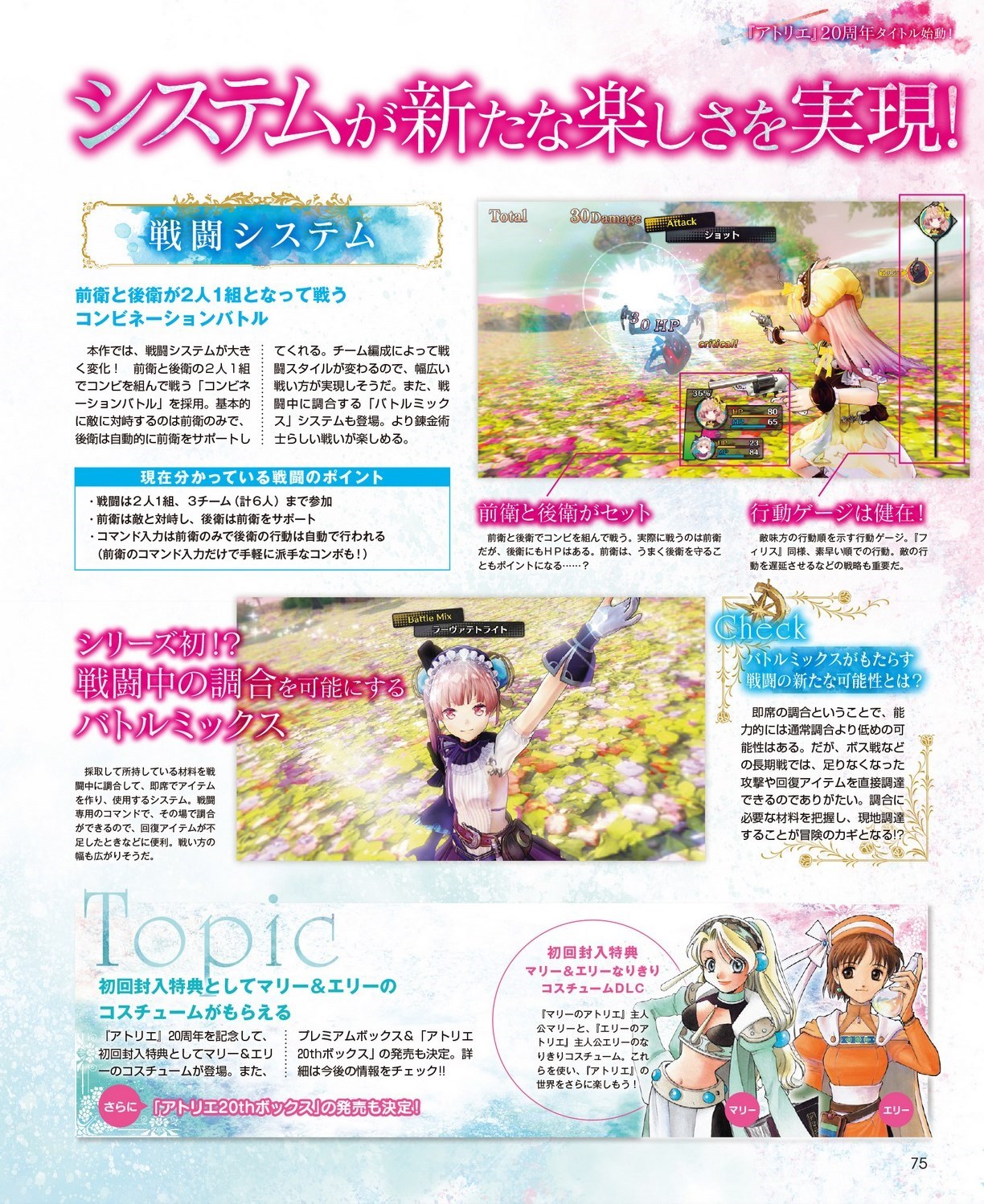 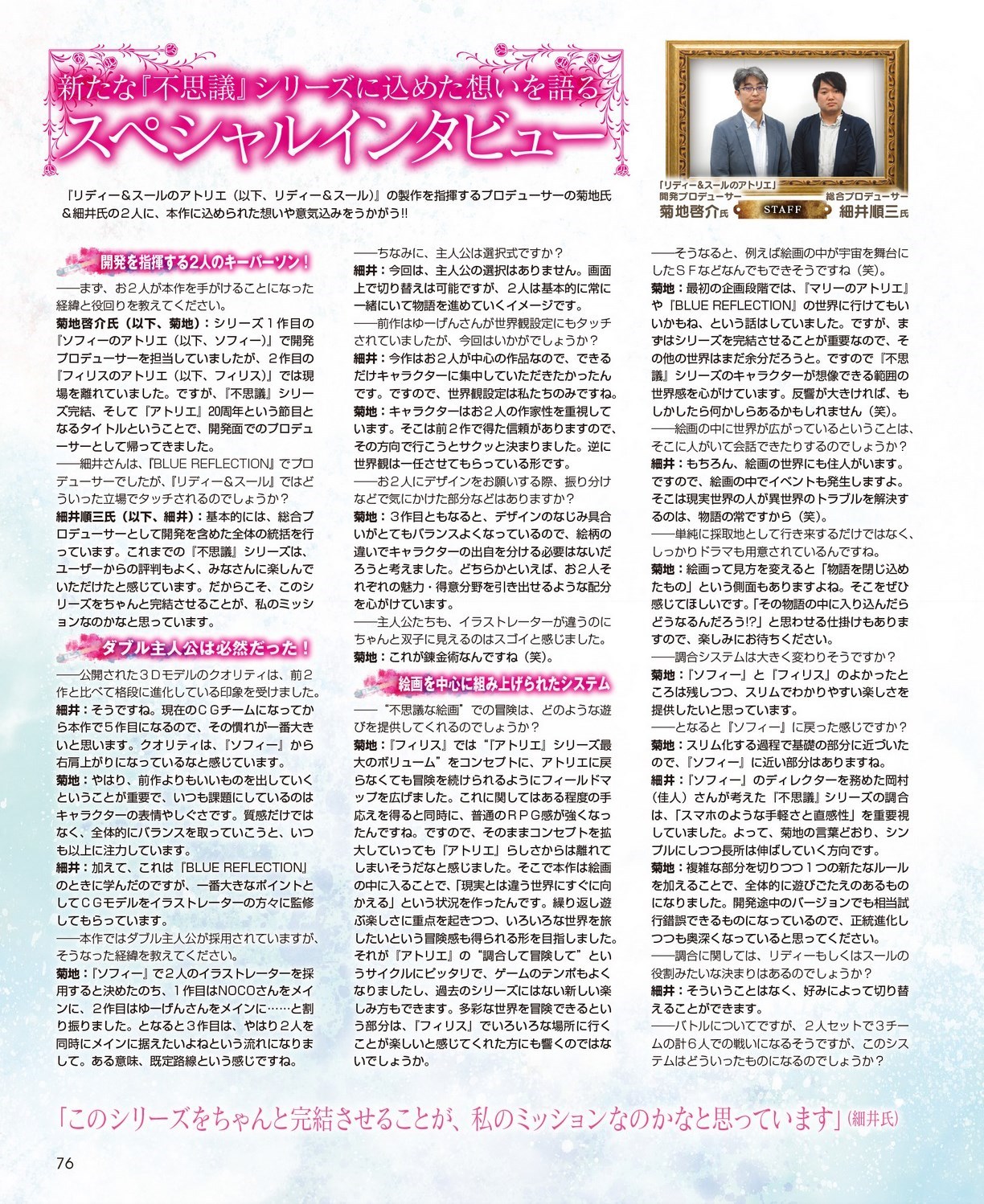 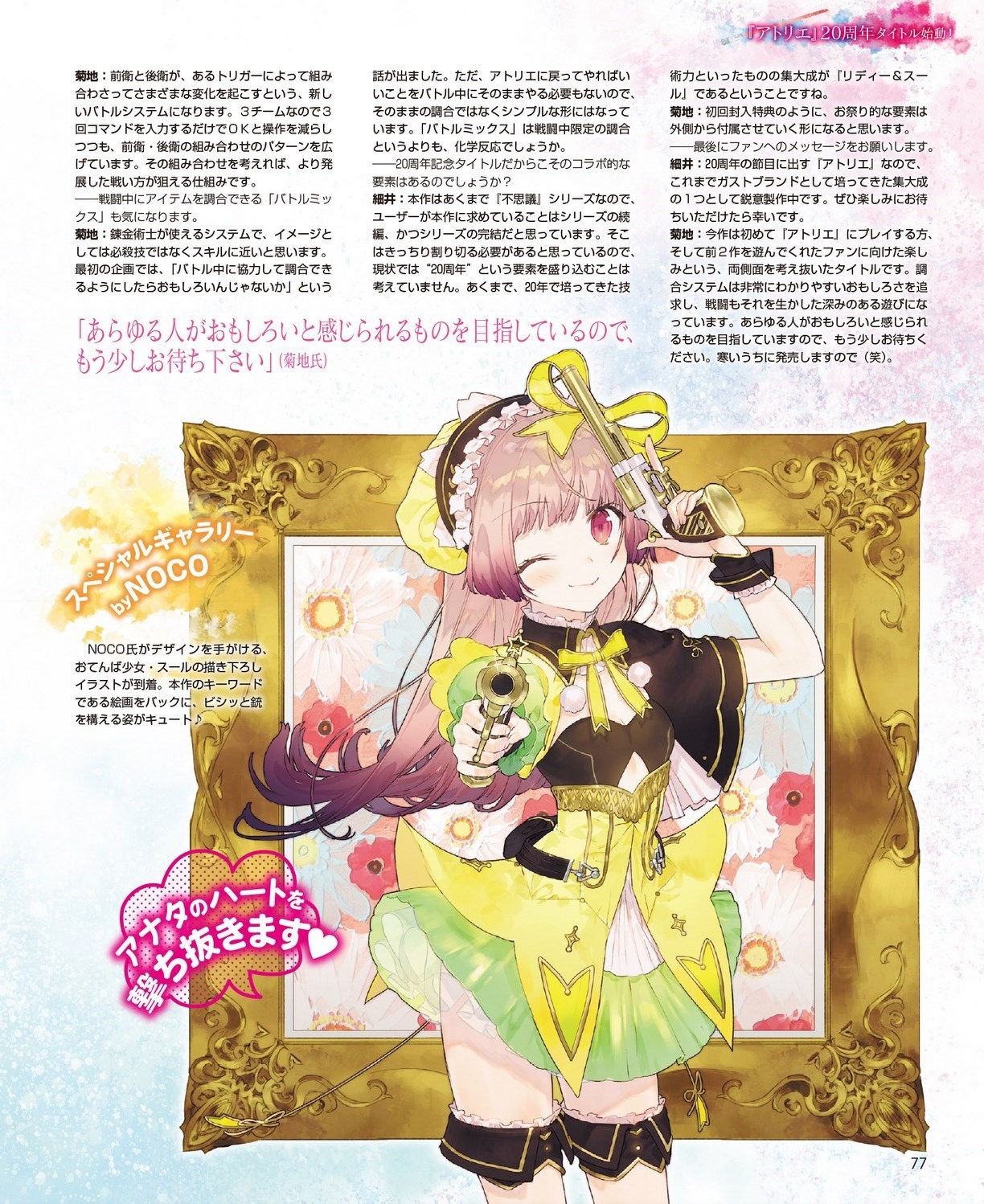 Atelier Lydie & Soeur is based on the concept of coexistence between the ordinary and the extraordinary, and utilizes a feature known as the “ordinary system” while interweaving extraordinary experiences within it.

In order to implement this, the theme of “paintings” was decided. In Melveille, the capital of the Adalett Kingdom, a small atelier was established.

There live twin sisters and beginner alchemists Lydie and Soeur. The girls, who pass the days while helping their alchemist father, had a dream.

“One day, I want to run the best atelier in the country.”

However, contrary to their dream, the twins are still inexperienced. While they are somewhat impatient regarding the deviation of the dream they embrace and reality, each day passes without concern.

Then one day, the twins discovered a painting. The painting was filled with a mysterious, dream-like world, with never before seen materials scattered like mountains.

Through their sudden encounter with the “mysterious painting,” the twins’ dream instantly became closer to reality. The older twin sister. A girl who works at her father’s small, not very well known atelier in Melveille, the capital of the Adalett Kingdom. She is carefree, kind-hearted, and sociable. She does things at her own pace and can be a bit airheaded.

She is not very good at moving her body. She is good at studying, but has a unique sense for the arts. The younger twin. She works at the atelier together with her older sister Lydie. She is a bright and lively tomboy. She can also be somewhat impish, and often teases her older sister.

She has the air of a genius, and is generally careless about everything. However, she dislikes bugs and will cause a fuss if one even lands on her shoulder.

■ Twins That Are Always Together Lydie and Soeur are twin sisters who help out their alchemist father and work at his atelier. In order to become the number one atelier in the country, they spend each day working as hard as possible. However, there is almost no work at the atelier, and they spend each day living at the level of bare subsistence. It is within this environment that the twins’ bonds will become even stronger.

—Lydie, as the more stable older sister, looks after her younger sister, Soeur, who she is often at the mercy of. —During an important scene, Soeur, a tomboy who tends to tease her older sister, supports Lydie. ■ The Worlds of Mysterious Paintings Lydie and Soeur run the atelier with the goal of becoming the number one atelier in the country. But contrary to such dreams, the twins follow a routine daily life. One day, the twins discover a painting in the basement of the atelier that significantly alters their fate. In progressing through the story, they will come to know the worlds of many different paintings.

—A mysterious painting discovered in the basement of the atelier. The twins, enchanted by the painting, unawarely enter its world. —A world full of fantastic scenery such as blooming flowers and a floating island in the distance. The world of this “mysterious painting” can be freely explored. ■ Dreams Become Reality Through the Worlds of Mysterious Paintings

Worlds discovered by chance. By exploring the worlds of these paintings and gathering materials, and by using rare materials obtained by defeating the monsters they encounter, the twins’ alchemy skills will increase. Their goal is to clear challenges and the like, receive regular evaluations from the country, raise their Atelier Rank, and become the number one atelier.

(1) Explore the worlds of paintings and synthesize the materials you obtain.

Explore the worlds of various paintings and obtain rare materials. You will be able to explore various mysterious paintings depending on your Atelier Rank. (2) Improve your alchemy and increase your evaluation from the country.

In the capital city of Melveille, where the twins live, there are plenty of requests, challenges, and the like seeking synthesis. By increasing your evaluation from the capital, your Atelier Rank will rise. The “Mysterious” sub-series’ puzzle-like synthesis returns in Atelier Lydie & Soeur. It is a synthesis system that aims to be intuitive and easy to understand. This time, a new element called “Activation Items” is being introduced. It adds surprise and unexpectedness to the usual synthesis system.

Activation Items are special items used during synthesis. Using them can have a great effect on the outcome of synthesis.

—While putting materials in the panels, throw in an Activation Item. —Like Othello, the colors of existing panels will change depending on the Activation Item. Each Activation Item has a different effect, and adds emphasis to usual synthesis. The battles of this game use a front and rear team-based “Combination Battle” system. It is a battle style matched to the “twin protagonists,” whose battle style changes depending on the formation of the team. There is also a “Battle Mix” system that allows players to synthesize during battle. This is a more strategic and dynamic battle system than ever before.

Teams are the Key to Battle During battle, you can synthesize the materials you have gathered using the new “Battle Mix” system. By instantly creating items, you can use the “Battle-Exclusive Synthesis Command.” Through this, you will be able to synthesize on the spot, and enjoy diverse and extensive battles.

—Synthesize the materials you collect during battle.