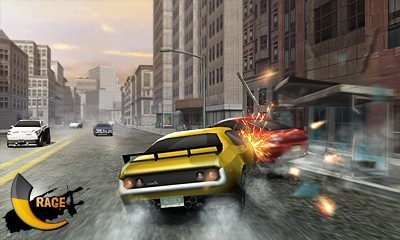 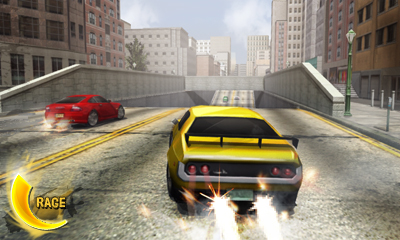 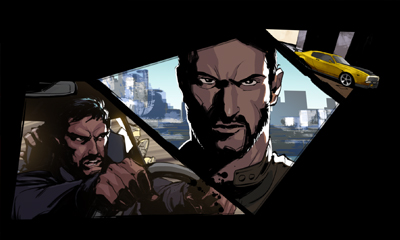 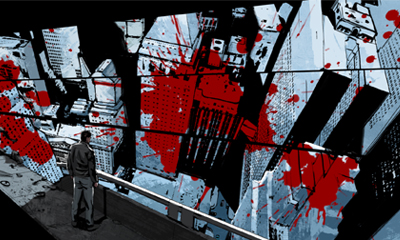 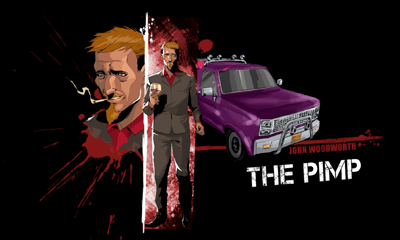 After years of undercover work on the Force, John Tanner wants to take matters of crime in his own hands, regardless of what the Law dictates. In a corrupt New York City run by criminal mobs, Tanner saves Senator Ballards life. He needs help in leading a crusade against Crime. Tanner accepts to clean the city off the record, against the Senators protection.

Tanner becomes a renegade and must take out five kingpins: a drug dealer, a human-organs trafficker, a pimp, an arms dealer and an over-greedy trader. Helped by his few friends, with no badge to hold him back, Tanner wages his war against crime with his weapon of choice: his car!

Driver Renegade is the first and exclusive action driving game on 3DS that lets you experience the intensity and brutality of urban car chases in 3D. Drive recklessly, perform jumps to fill your Rage bar and unleash devastating takedowns on your enemy cars!

FIRST ACTION DRIVING GAME ON 3DS
Discover the open world and the landmarks of New York, the city of all crimes. Experience a 3D-enhanced sense of speed and immersion within the guts of a vast modern city.

YOUR CAR IS YOUR BEST WEAPON
Drive fast, take risks, destroy criminal activity locations, perform jumps to fill your Rage Bar and unleash devastating attacks on your enemies, ram them, and finally take them down!

A NEW LIGHT ON TANNERS STORY
Discover the 20 story-based missions, all delivered with a unique, cutting-edge 3D style. In this story set between the events of Driver 1 and Driver 2, Tanner confronts enemies full of vices. He also meets new enigmatic allies that will help him take on the most corrupt parts of New York City. But will that be enough to obtain a sense of Justice?

STRONG REPLAY VALUE
Unlock up to 50 different cars and tune them up in your private garage. Over 70 challenges and tracks spread all over the city will put your driving skills under stress. Choose among the 7 types of challenges (Time Attack, Elimination Mode, Road War) to compete against deadly AI opponents.

New screenshots and info on Ubisofts 3DS website for Driver Renegade, the latest spin-off based on the Driver franchise have emerged, but what do they add to the little we know about the game?

Weve currently seen short snippets of footage from Nintendos software lineup trailer of the game, but not much else, and some of Ubisofts description of the game on their very own website tells us the following:

Lets take a look at some of the screenshots on gamekyo.com and see whats new:

As you have probably noticed  we can see a map in flat SNES-like 3D on the bottom screen, along with various icons and such on it (one being a spanner, likely a key for a location to repair your vehicle mid-race). Looking at what were seeing wed certainly say this game follows Burnout Paradise quite closely, at least when it comes to racing and challenges.

With Ubisofts description mentioning how the main focus is on car chases and takedowns, we wonder how much variety will be in the games missions. We can clearly see the Rage bar in some screenshots at the bottom-left of the action, again reminding us of the Burnout games. However, looking at the HUD on the top screen were a tad concerned about the games variety, ranging from targets (likely for Takedown challenges), to a metre countdown (races?). Thats all for now.

One of the previously released screenshots shows one of the game's seven challenge types.

Theres more though! On Ubisofts separate 3DS website, its mentioned while the game only has 20 story-based missions set between Driver 1 and 2 in the Driver timeline, its also packing 50 cars and 70 extra challenges across seven modes.

Unfortunately Ubisoft has only listed three modes out the seven: Time Attack, Elimination and Road War, but its good to see that city has been used to its potential in terms of things to do. What will be filling the other four? Some sort of stunt based challenges?

As for the visuals  its looking great, much improved from the older screenshots weve posted up here. Some great lighting effects and reflections, let down a tad by the draw distance, which may have us checking the lower-screen map more than wed like.

So while it seems the game isnt lacking in content the real test will lie in the citys layout and design, and how it works with the games handling model and general challenges. Both Burnout Paradise and Need for Speed: Hot Pursuit, Criterions recent games both had different open-world map designs, both of which were tailored for each games general focus and quirks, so hopefully well see the same here.

For now we can safely say this isnt lying in the Asphalt 3D camp of Ubisofts launch lineup (currently also populated with Rabbids 3D and Combat of Giants: Dinosaurs 3D). Despite being announced later than other promising Ubisoft titles, this is one of the better ones out of the 8 developed in-house.