- This game is not a remake, it is a brand new entry in the Kingdom Hearts Series.
- This is the next stage of the franchise after Coded/358/BbS.
- Sora and Riku will be the playable characters in the game, and they will be visiting new worlds.
- There will be various hints relating to this game hidden in Re:Coded.
- There should be more information and announcements at next year's E3.

- KH3D was created after Nintendo approached Tetsuya Nomura. Nomura has a unique idea for this game.
- KH3D will occur in the same timeline as current games.
- The two main characters will be Sora and Riku. Throughout the game, the two appear to be "alternating", creating a system of two people.
- This story is full of mystery, and will be beyond expectations. Due to the timeline, players will have to think hard about the idea, as to not be fooled.
- The player will realise the scenario in time, but for the meanwhile it will be a mystery twist.
- Nomura cannot reveal more information at this time.
- The 3D system will be taken advantage of, but more cannot be said at this time.
- The theme of the game is "trust". 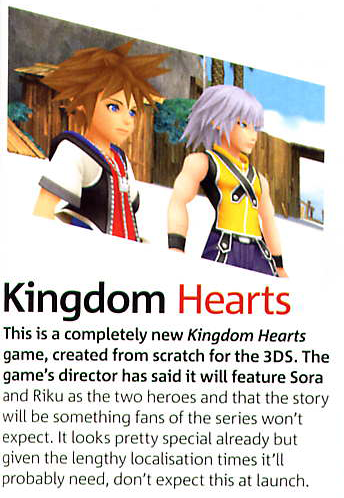 Ban a vita per nomura plz :/

- The story behind how they got started on development for KH3D (temporary title) was that Nintendo talked to them really enthusiastically about it, and SE wanted to jump on board and they asked them if they could make something for this hardware.

Since they were asked to do something with KH, that will be the starting point for the game, but they are planning on expanding it to titles other than KH.

As to where it will start at, all he can say is that it starts around the same time.

- The main characters will be Sora and Riku. You will alternate between them as you go through the game. Were thinking of making the alternating of the two characters as central to the game.

- The story this time will be one filled with mystery that you wont be able to predict. As its done at the same time, it will be difficult to imagine this happened during KH. But dont be fooled by what you see.

But that mystery is no mistake, and he is considering whether to explain it then or explore the answer later. There is still time before the information ban is lifted, so he cant answer it yet.

- Hes thinking about how to use the 3D in the game system, but he cant give the details on it just yet. But, since with 3D you can make use of depth, you should think about the concept of down.

There are lots of things you cant do on your own, so he wants to make it about how you trust in others to help you do those things.

- Other games that he noticed Of course, Kojima.

It was quite a lot of encouragement to see all those game titles that Nintendo announced. When KH was announced for the 3DS and the audience clapped, I felt I had to do my best to make a good game.

- About making other games in 3D, he says First I want to finish making KH3D.

He has a lot of ideas, but he doesnt know if any of them will be made into games. He has a lot of plans for other games, but first he has to try making one.

Other companies will come up with interesting ways to use 3D, so once people start building on that, the possibilities will grow.