UK retail sales figures are out for Red Dead Redemption 2 and while the title has sold very well indeed, it has failed to top FIFA 19, which remains the biggest week one release of the year.

Second place is highly respectable of course, but with huge development costs, the game will need to successfully monetise its online service in order to be considered a success – by Rockstar standards at least.

The title was never going to have the same draw as the company’s biggest franchise. And the games market is a very different place to 2013 when GTA V was released. But week one sales of 27 per cent of the biggest game launch of all-time is nothing to be sniffed at.

We await a report on digital sales from Rockstar or parent Take-Two.

Another way to look at the game is that RDR 2 claimed just over 60 per cent of the retail market this week, so the idea that no one was buying anything else this weekend is rather put to rest. Compare that to an incredible 89 per cent market share for GTA V on its launch week and you get an idea of how big it was out-of-the-blocks.

More recent comparisons of 75 per cent for FIFA 19 and just 44 per cent for Call of Duty: Black Ops 4 show RDR 2 is doing well, though not outstandingly so, in dominating public consciousness at launch.

According to the article, RDR2 had the second biggest week one sales in UK, so under FIFA 19, but above COD Black Ops IIII. Retail only, of course.
The game has sold around 27% of what GTA V sold back in 2013, but it sold around double of what the first Red Dead Redemption sold back in 2010. 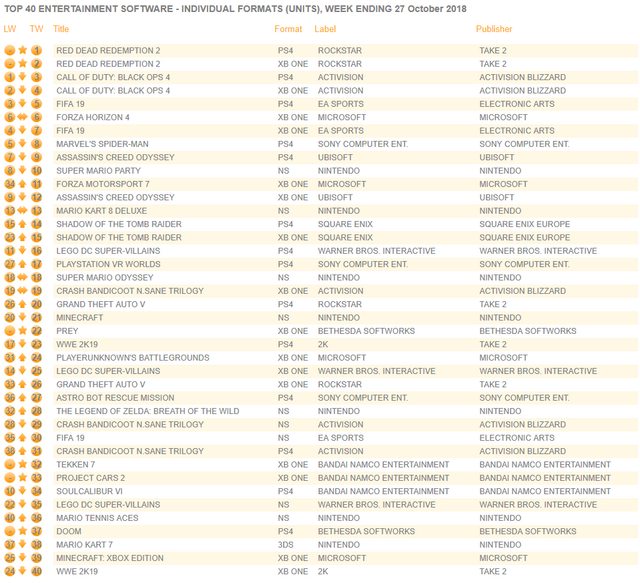