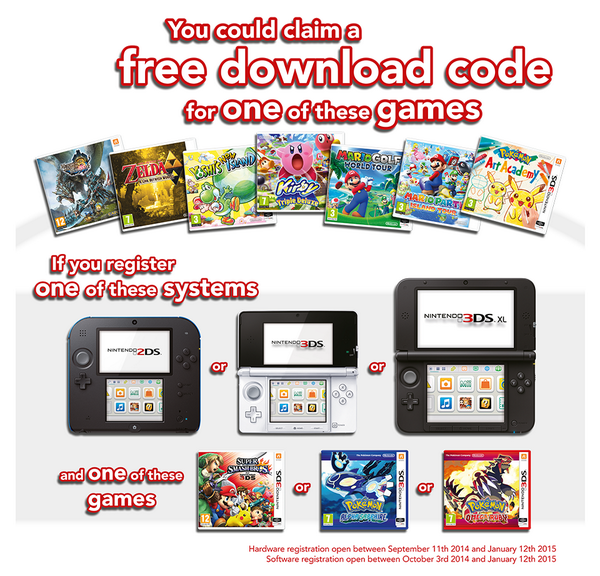 With the winter season on its way, Nintendo has today announced a new promotion for Nintendo 3DS and 2DS systems, the Nintendo 3DS Winter 2014 Bonus Game Promotion, which is sure to appeal to users looking to expand their game collection in preparation for the colder months!

To take part in the Nintendo 3DS Winter 2014 Bonus Game Promotion, participants simply need to do both of the following:


Register a Nintendo 2DS, Nintendo 3DS or Nintendo 3DS XL system with Club Nintendo between 11th September 2014 and 12th January 2015 (23:59 local time); and…
Register a copy of Super Smash Bros. for Nintendo 3DS* (releasing 3rd October), Pokémon Omega Ruby** or Pokémon Alpha Sapphire** (both releasing 28th November) with Club Nintendo between 3rd October 2014 and 12th January 2015 (23:59 local time), and fill out the software registration survey – a required action if the copy of the game is purchased at retail.

In return, participants can request a free download code to download one of the following games from Nintendo eShop: