[PS4/Vita] Galleria no Chika Meikyuu to Majo no RyodanTBA 2020

Labyrinth of Refrain: Coven of Dusk is directed by Tatsyua Izumi, who also wrote the scenario; character design is by Takehito Harada; and music is composed by Tenpei Sato.

Announced characters include the protagonist (an exorcism lamp?), someone named Eureka, the witch Madam Malta, and Madam Malta’s granddaughter Perico.

The development team is made up of staff that worked on the first game, and Emi Evans is back for the music. The game itself is described as more of a successor than it is a sequel. 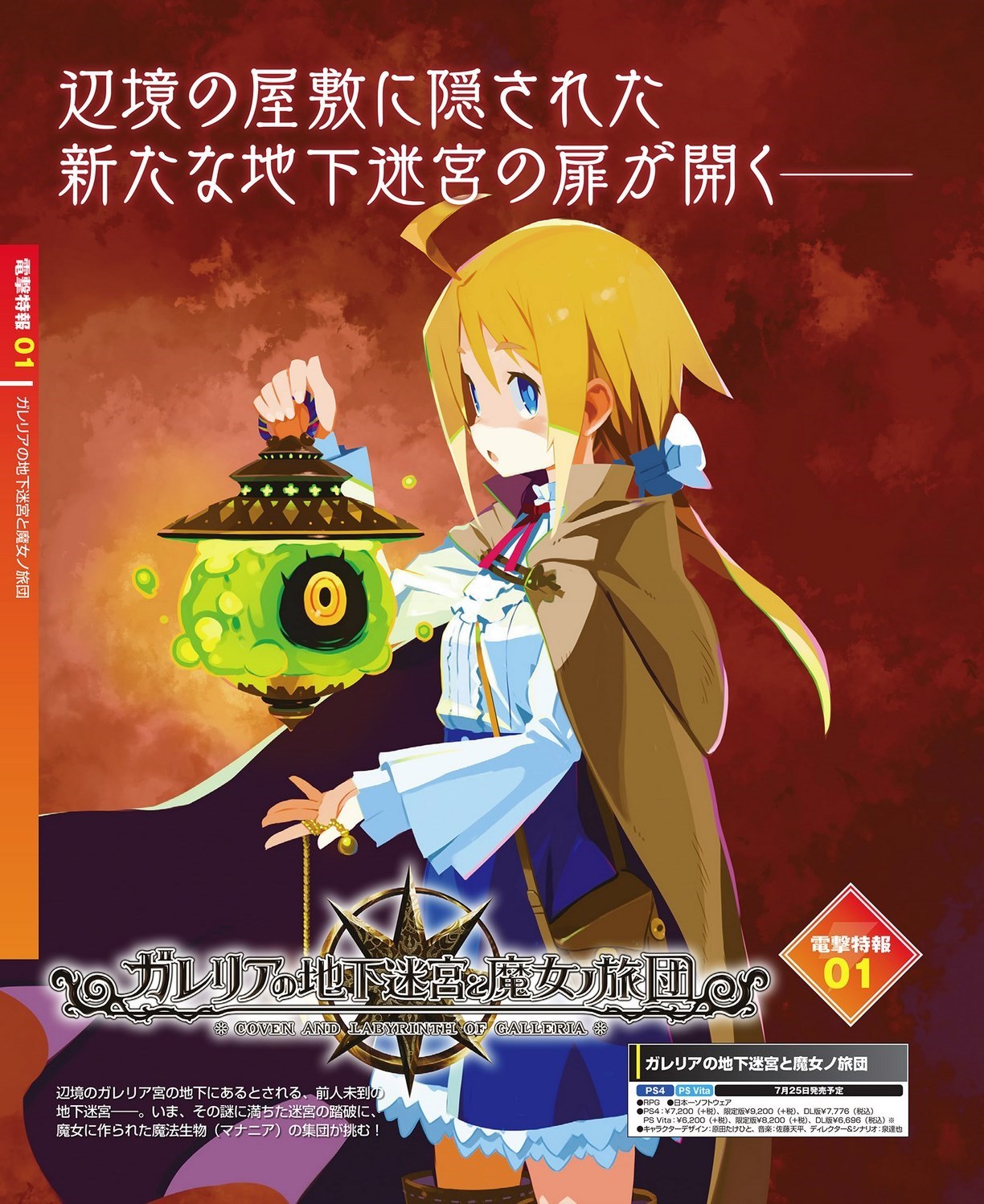 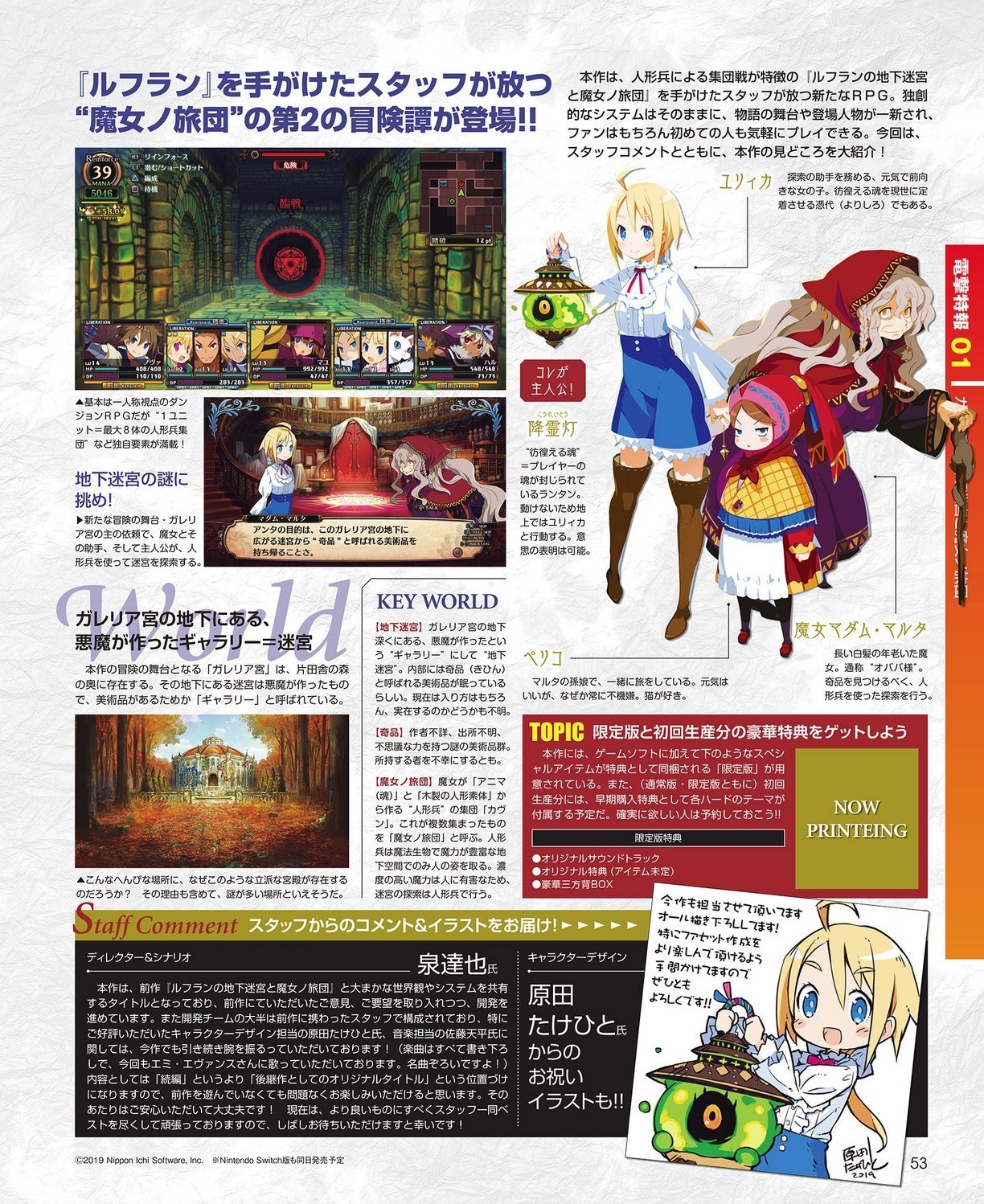 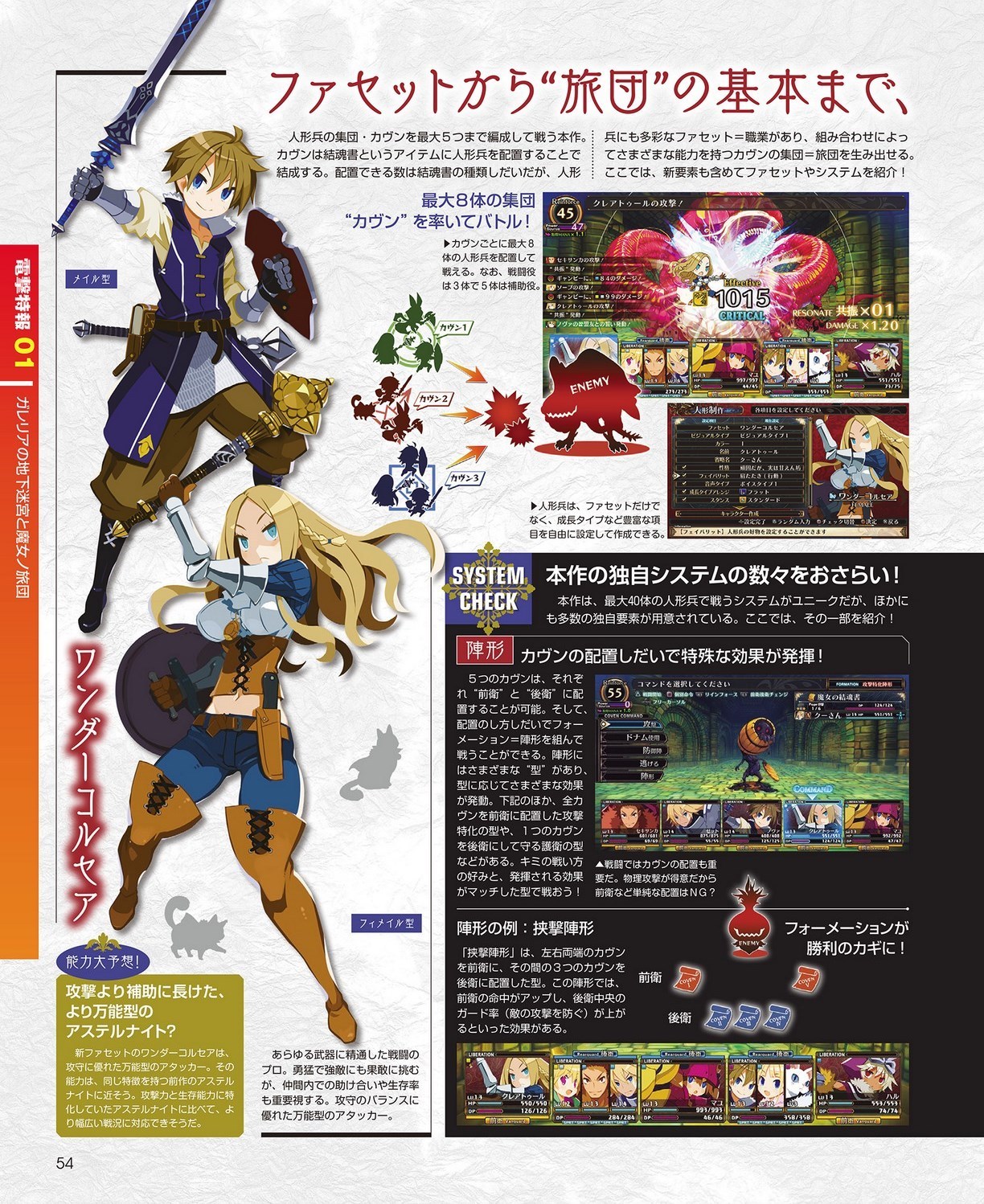 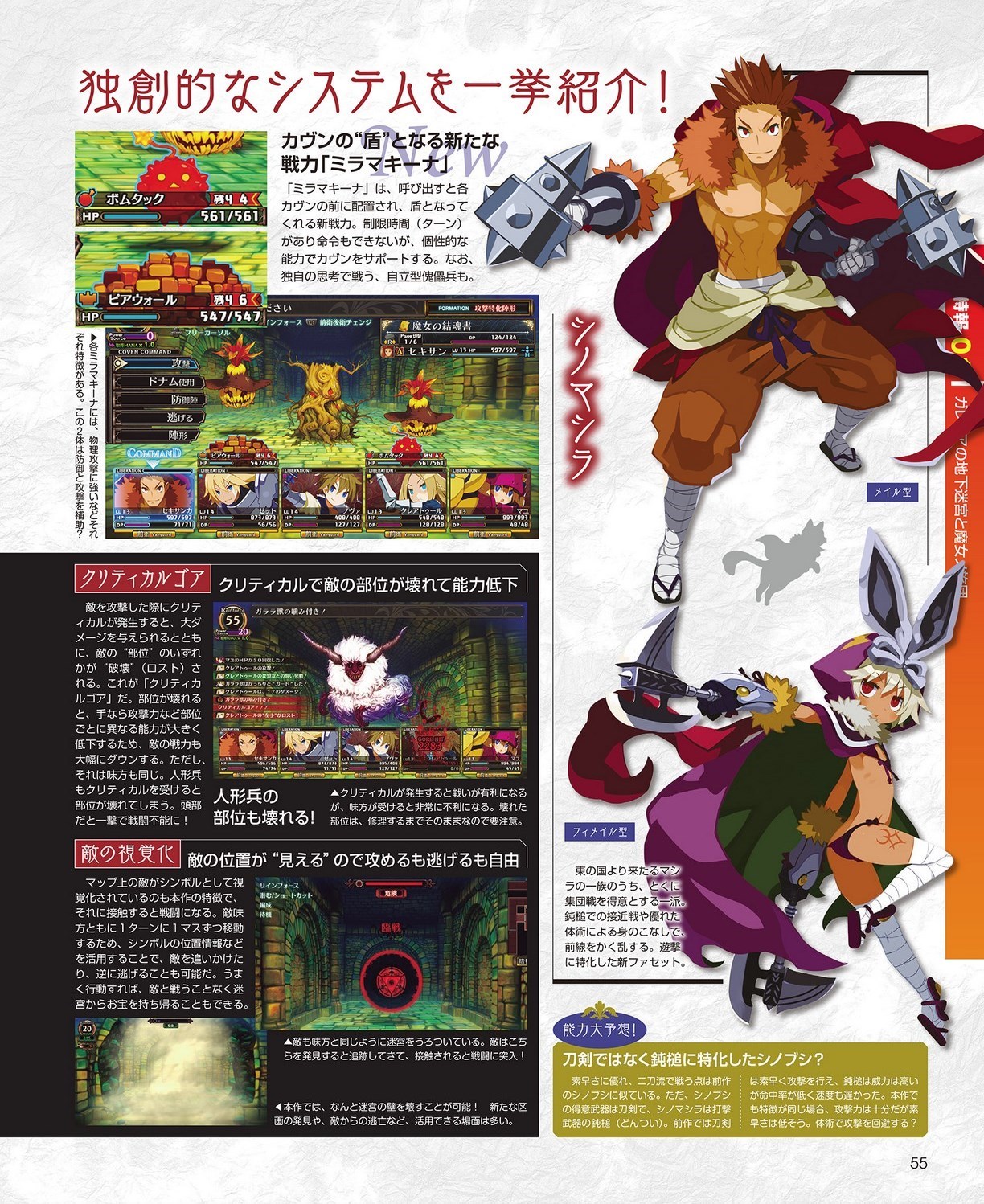 A group of loving and courageous adventures, in search of wonders—.

Nippon Ichi Software will release Labyrinth of Galleria: Coven of Dusk for PlayStation 4 and PS Vita. We are working hard to develop an exploration-type dungeon RPG played from the first-person perspective.

We hope you can look forward to this new RPG from Nippon Ichi Software. —The story of somewhere not here.

As the “Necrolamp” owned by the witch Madam Malta, the player will obey her commands and make their way through an untrodden, underground labyrinth.

The player commands magical beings called puppet soldiers that are neither human nor beast.

The puppet soldiers born of magical power and the strange lantern Necrolamp make form a unique group…When the “witch brigade” challenges the labyrinth, the curtain will rise on a mysterious adventure in search of treasures. A girl who came to Galleria in response to a poster seeking an exploration assistant. She is energetic, cheerful, and positive in any situation. As the witch Madam Malta’s assistant, she helps with labyrinth exploration by becoming an anchor to the real world for wandering souls.

The player’s avatar, in which “wandering souls” and the “player’s soul” are sealed. It cannot move on its own, and its above ground actions occur together with Eureka as it’s vessel. Though it can express its intentions, it does not speak or express emotion. Its name is can be set by the player.

An old witch with long gray hair who goes by the nickname Grandma. At the request of the ruler of Galleria, she searches the underground labyrinth using puppet soldiers in order to find treasures.

The witch Madam Malta’s granddaughter, who travels with her. While energetic, she is always ill-humored and you cannot tell what she is thinking. There are things that she does not understand, which tend to surprise her. She also likes cats.

The witch Madam Malta’s granddaughter, who travels with her. She is good-spirited, but she is always in a glum mood and makes it hard to tell what she is thinking, confounding those around her. She also likes cats. Galleria, A Mansion with a Mysterious Underground Labyrinth

A mansion built in a remote area and the setting of this story. It can be found in the depths of a thick forest, at the furthest end of the remote countryside where rural landscapes fill the area. In its basement is a “complicated and mysterious gallery” called “The Underground Labyrinth of Galleria.”

An underground labyrinth—a “gallery” created by demons, according to legend—deep below Galleria. Nowadays, its existence is ignored, and the method to enter the labyrinth has been lost. But inside there are said to be treasures that possess mysterious powers.

A collection of mysterious treasures of unknown origin and mysterious powers that are said to bring the possessor misfortune.

Facets refers to the “type of puppet soldier,” as there exist various categories and each has different strengths and weaknesses. Even if the same puppet soldier has a different facet, its stats and skills will change in a big way, so it is necessary to adequately utilize and combine them based on the situation.

Combat professionals that are experts in the martial arts and the use of all weaponry. While they courageously challenge even enemies that are difficult to defeat, they are emphasize helping the party and survival. They are all-purpose attackers that specialize in well-balanced offense and defense more than attack power, and can adapt to any situation. The Mashira clan comes from a country in the east. Among the clans that work in assassination, they specialize in group battles. They attack at close range with a striking-style weapon called the “Blunt Hammer,” and move their body according their skilled taijutsu, making them good at disrupting the front lines. They are an attack-specialized facet that controls the enemy’s focus and dominates the battlefield. The player takes on the role of Necrolamp, a lantern owned by the witch Madam Malta, and obeys her command to clear the labyrinth. Puppet soldiers created by the witch join the party. Each puppet soldier has different combat abilities and fight in place of the player (who cannot directly attack).

In Labyrinth of Galleria: Coven of Dusk, a group of characters called a coven makes up a single unit in battle. There are many types of covens, and a witch brigade can be formed by placing characters in covens.

The abilities of a coven is determined by the characters in the coven and the traits of the coven itself. Depending on the compositions, you can create all sorts of witch brigades. Up to five covens can make up your party. Battles against enemies unfold through the offensive and defensive powers of multiple covens.

—Not only can you set a puppet soldier’s nature, visual type, and name, you can also set their preferred stat growth, color, skill selection, and flavor text. The labyrinth is a 3D dungeon the player explores in the first-person perspective. Enemies are represented by symbols on the map, and touching a symbol triggers a battle. Both enemies and allies can move one square at a time. By fully utilizing your field of vision and map, you can avoid encountering strong enemies while also getting your hands on the rare items that lie asleep in the labyrinth’s depths. In battle, the player commands several covens, and each coven can launch an attack on the enemy. You can utilize various tactics to defeat the enemy, such as going full-offensive with a coven full of attackers, utilizing specialized techniques activated by coven units, and employing formation effects. —What is the “Liberation” displayed above each character? —For those that prefer a small party, you can also register just one character to each coven. If a critical hit occurs when attacking an enemy, there is a chance that it will destroy a vital part of the enemy’s body. This is known as a Critical Gore.

The enemy’s stats will severely decrease depending on the destroyed part. The occurence of criticals are affected by various factors, including the characteristics of the coven. Focusing on critical hits to gain the upper hand in battle is a good strategy, as there are many ways for a coven to generate critical hits.

However, allies can also experience a Critical Gore and have their parts destroyed. While a puppet soldier can continue fighting even if its arms or torso is destroyed, if its head is destroyed, it will be incapacitated with one hit. Destroyed parts will only return after being repaired at the base, and you must be careful as losing parts will lower your stats. Your covens fight in a single formation that is split into a vanguard and rearguard.

Covens can assume different types of formations, each of which produce different effects.

The All-out Attack formation puts all covens in the vanguard.

The Convoy formation puts all covens in the rearguard. By summoning a character called a Miramachina, they are placed in front of a coven to act as its shield. While the player cannot issue individual commands to Miramachina and there is a limit on the number of turns one can stay on the field, they support the battle in various ways with their unique abilities. —The gallery room “Red Tribuna” at the heart of Galleria acts as your base from which you can head into the labyrinth. —Apart from exploring the underground labyrinth, a main story that revolves around the daily happenings above ground in Galleria will unfold. The limited edition of Labyrinth of Galleria: Coven of Refrain will include the following content:

First-print copies of Labyrinth of Galleria: Coven of Refrain will include an original theme for PlayStation 4 or PS Vita.