‘Call of Duty: WWII’ camps out the top stop for a third week
Activision Blizzard’s ‘Call of Duty: WWII’ retains the No1 spot for a third week since launch, narrowly holding off EA’s ‘Star Wars Battlefront II’ which launched on Tuesday and Friday this week for PS4, Xbox One and PC.
EA drop one place to No3 with ‘FIFA 18’. Nintendo debut in similar positions to last year’s Pokemon Sun/Moon with ‘Pokemon Ultra Sun’ debuting at No4 and ‘Pokemon Ultra Moon’ at No5. Other new entries this week include EA’s PS4/Xbox One ‘The Sims 4’ at No7, Rockstar/Take 2’s PS4, Xbox One and Switch ‘L.A. Noire Remastered’ at No8 and Warner’s PS4, Xbox One ‘Lego Marvel Super Heroes 2’ in at No10.
Bethesda’s PS4 ‘The Elder Scrolls V: Skyrim VR’ debuts at No19 as the most successful 3rd party week 1 launch for a VR-required title on PS4 (Sony’s 2016 launch title ‘Playstation VR Worlds’ is No1 and 2017’s ‘Farpoint’ is No2). On other PS VR related news, Sony’s ‘Playstation VR Worlds’ shoots back in to the charts at No21on the back of massive promotional activity, centrered around the PS VR headset. Bethesda’s Switch version of ‘The Elder Scrolls V: Skyrim’ is the last of the new releases within the Top 40, debuting at No26.
UK week 46 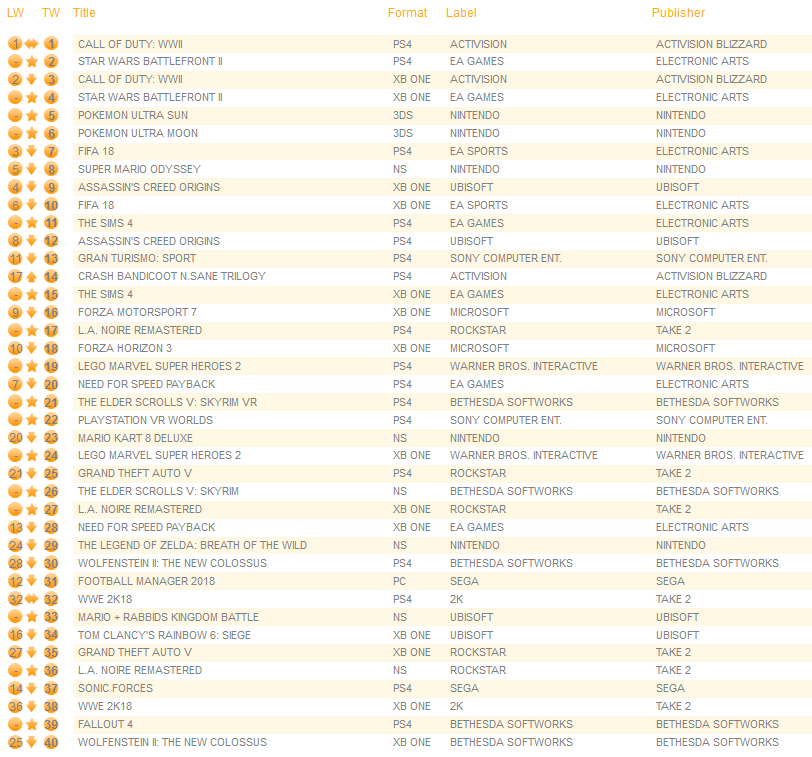