LOS ANGELES (May 30, 2017) – Tokyo RPG Factory, the SQUARE ENIX® studio dedicated to creating games that blend Japanese role-playing games with the latest technology for a new generation of gamers, has announced their all-new title, LOST SPHEAR (read as “Lost Sphere”). The title is set to arrive on the PlayStation®4 computer entertainment system, Nintendo Switch™ console, and STEAM® in early 2018 for $49.99.

The adventure of LOST SPHEAR begins in a remote town where a young boy, Kanata, awakens from a devastating dream to find his hometown disappearing. To stop the world from being lost forever, Kanata and his comrades set out to rebuild the world around them with the power of Memory by manifesting thoughts into matter.

Expanding upon the beloved features from their debut title, I Am Setsuna™, LOST SPHEAR features an enhanced gameplay system with a revamped ATB battle system where players can strategize and freely adjust their placement mid-fight, seamless environments, and various locations to explore.

LOST SPHEAR will be available digitally from the PlayStation®Store, Nintendo eShop on Nintendo Switch, and STEAM. A physical package is now available for pre-order exclusively from the SQUARE ENIX Online Store for the PlayStation®4 system and Nintendo Switch. Fans who pre-order the game from the SQUARE ENIX Online Store will receive two music tracks as a gift at launch.

FEATURES:
Unique and powerfully unforgettable storyline with seamless gameplay
Enhanced Battle System with new ATB 2.0 offering more freedom in combat
Machine Equipment - capture Kisou robots in the fields or whilst in battle then equip your characters to gain enhanced abilities 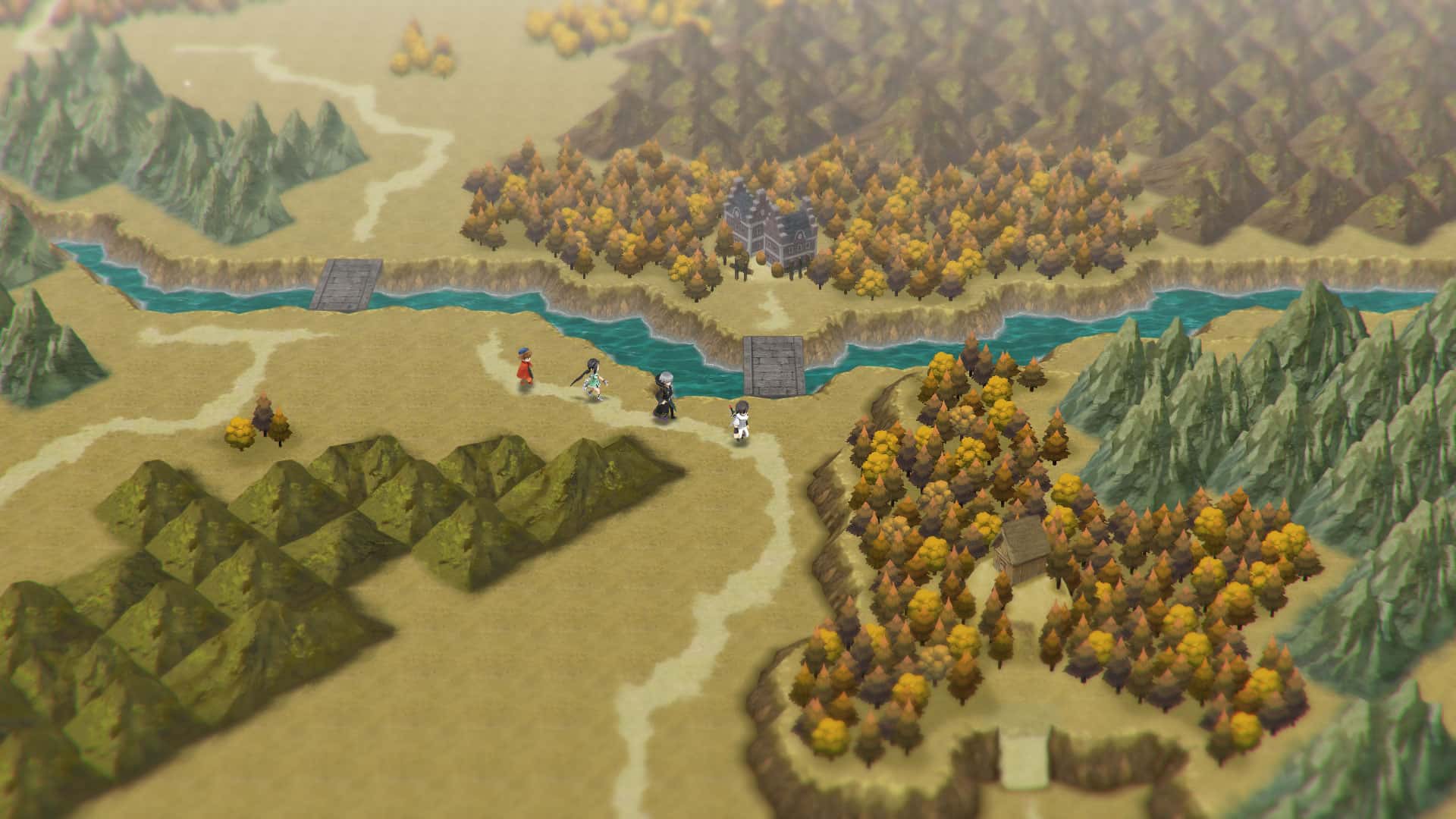 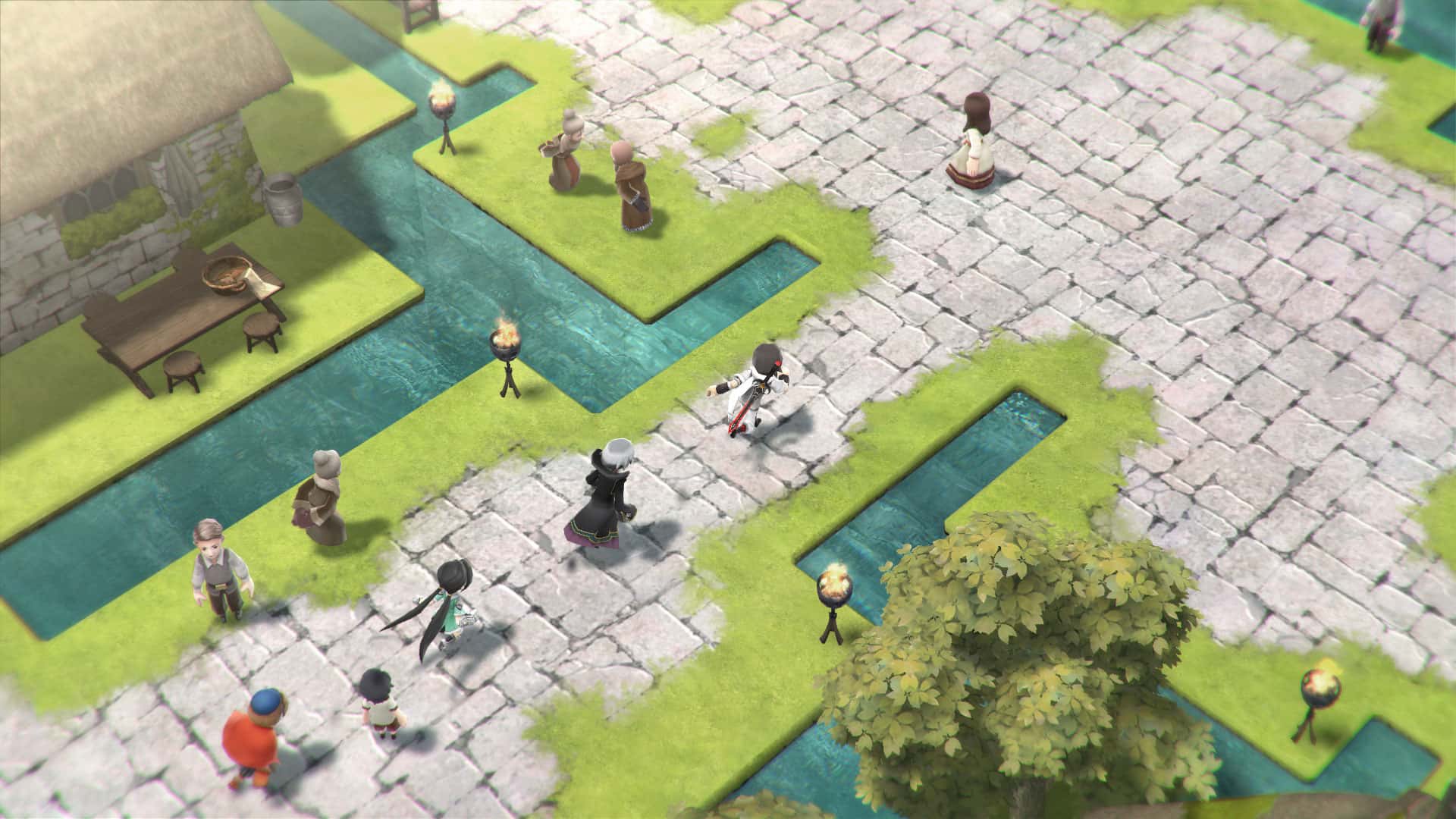 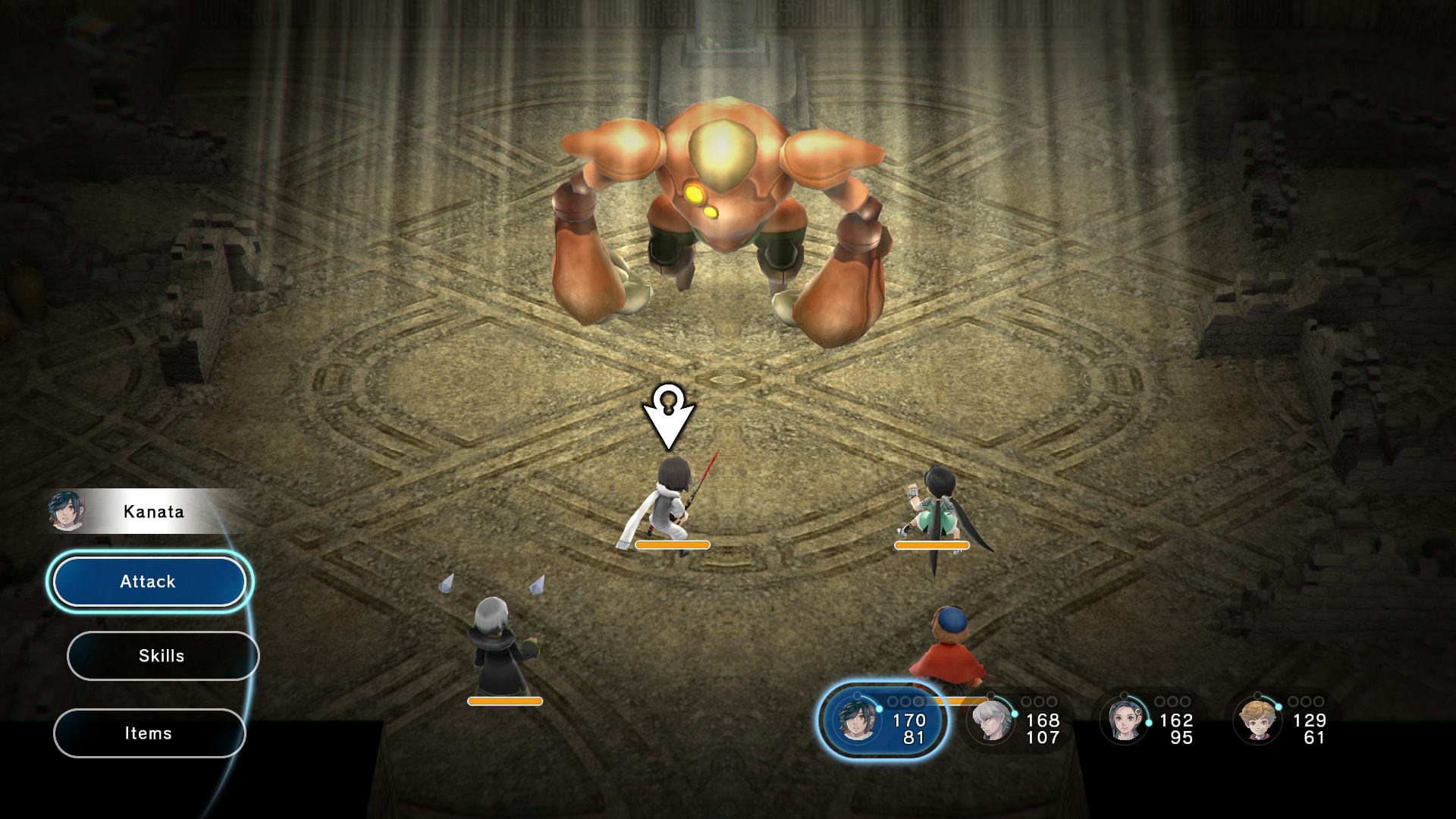 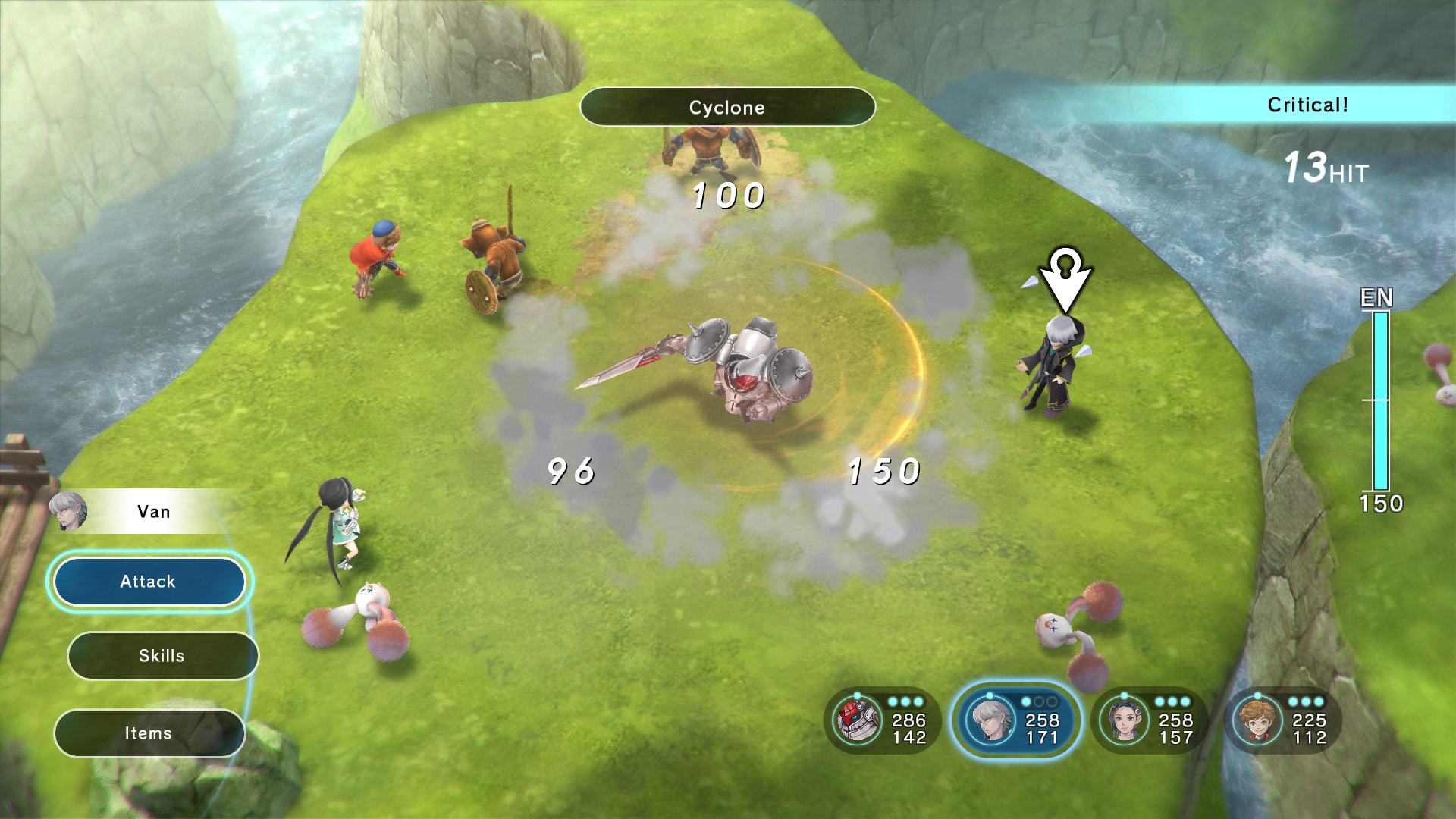 Nothing's gonna build us back again. 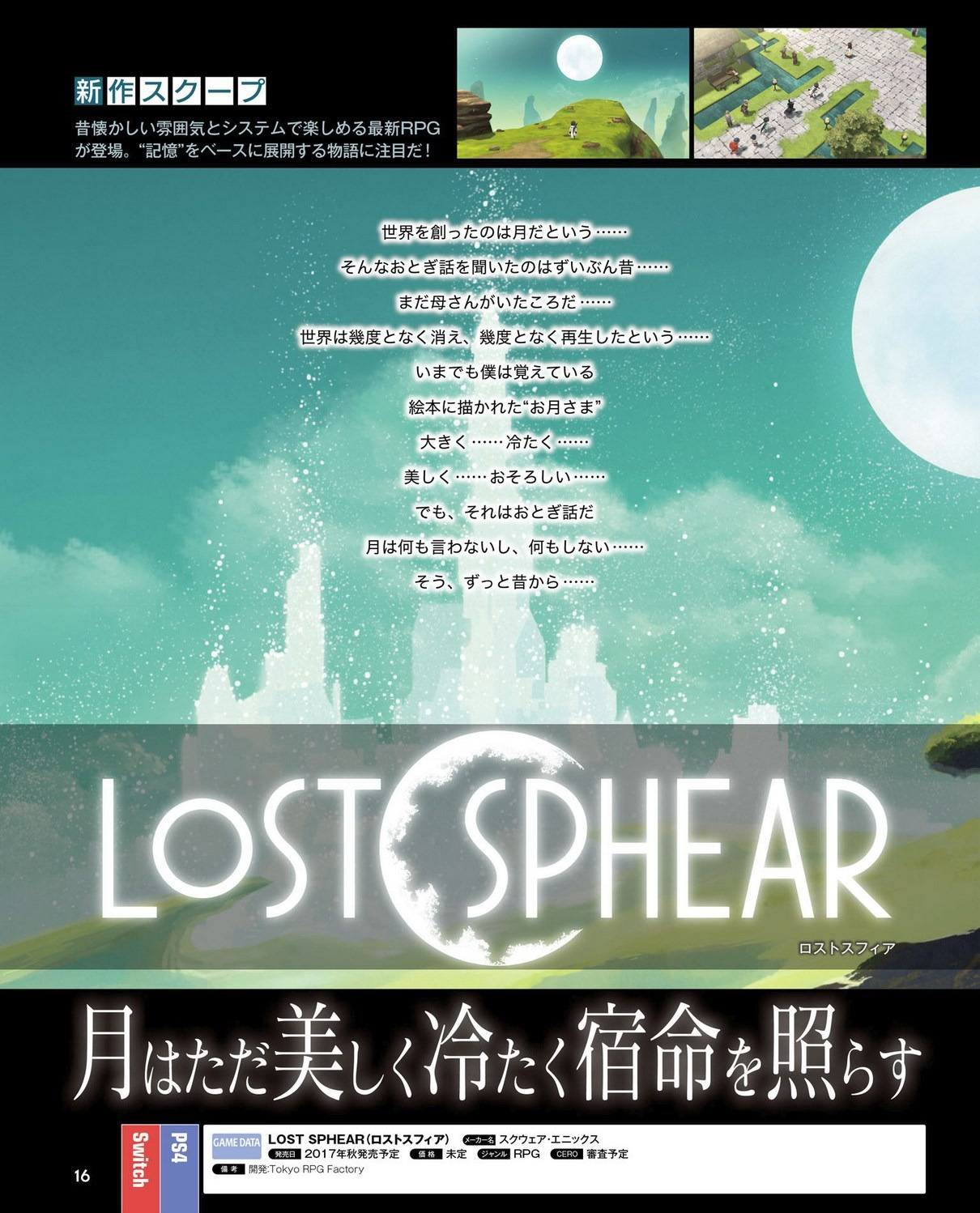 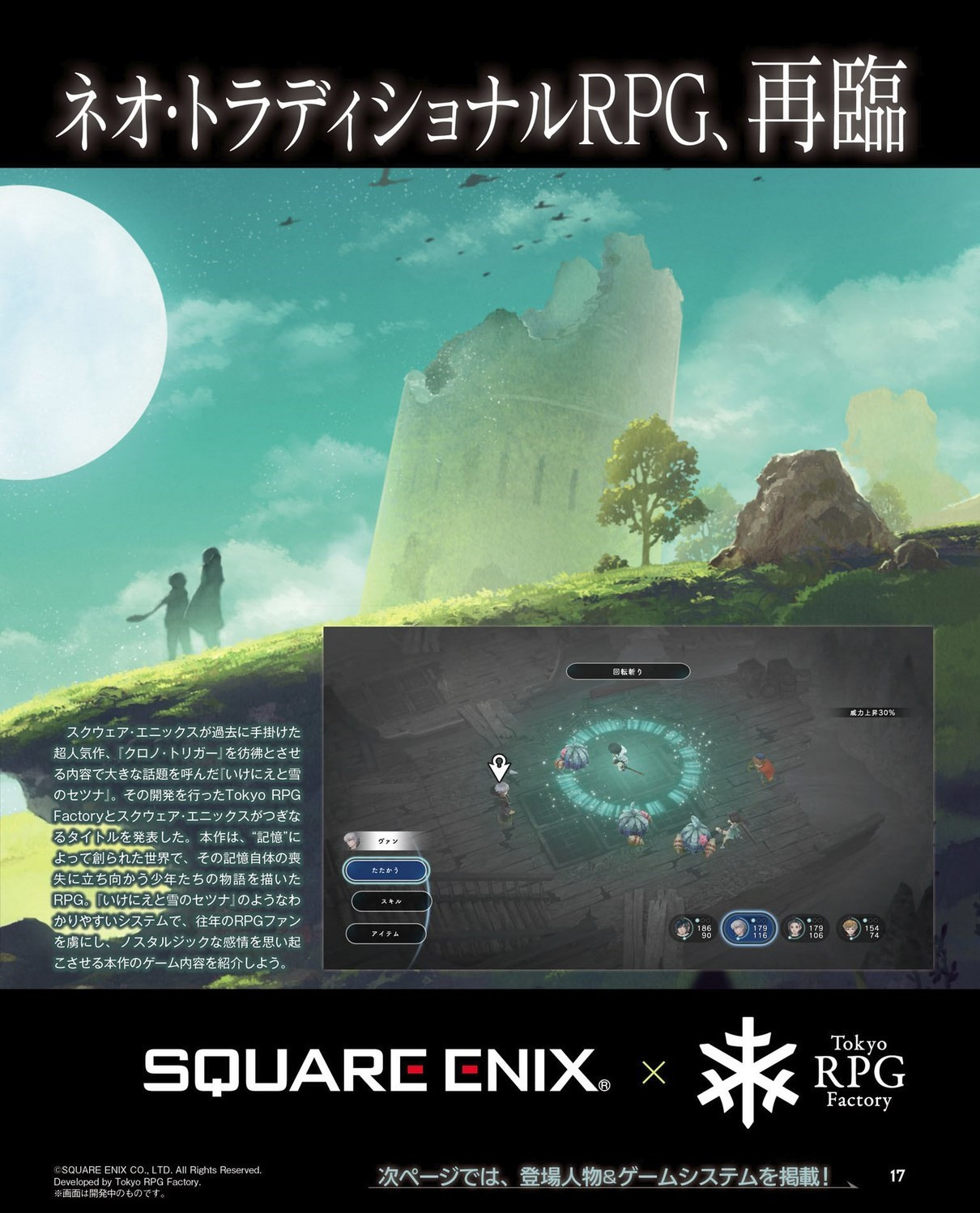 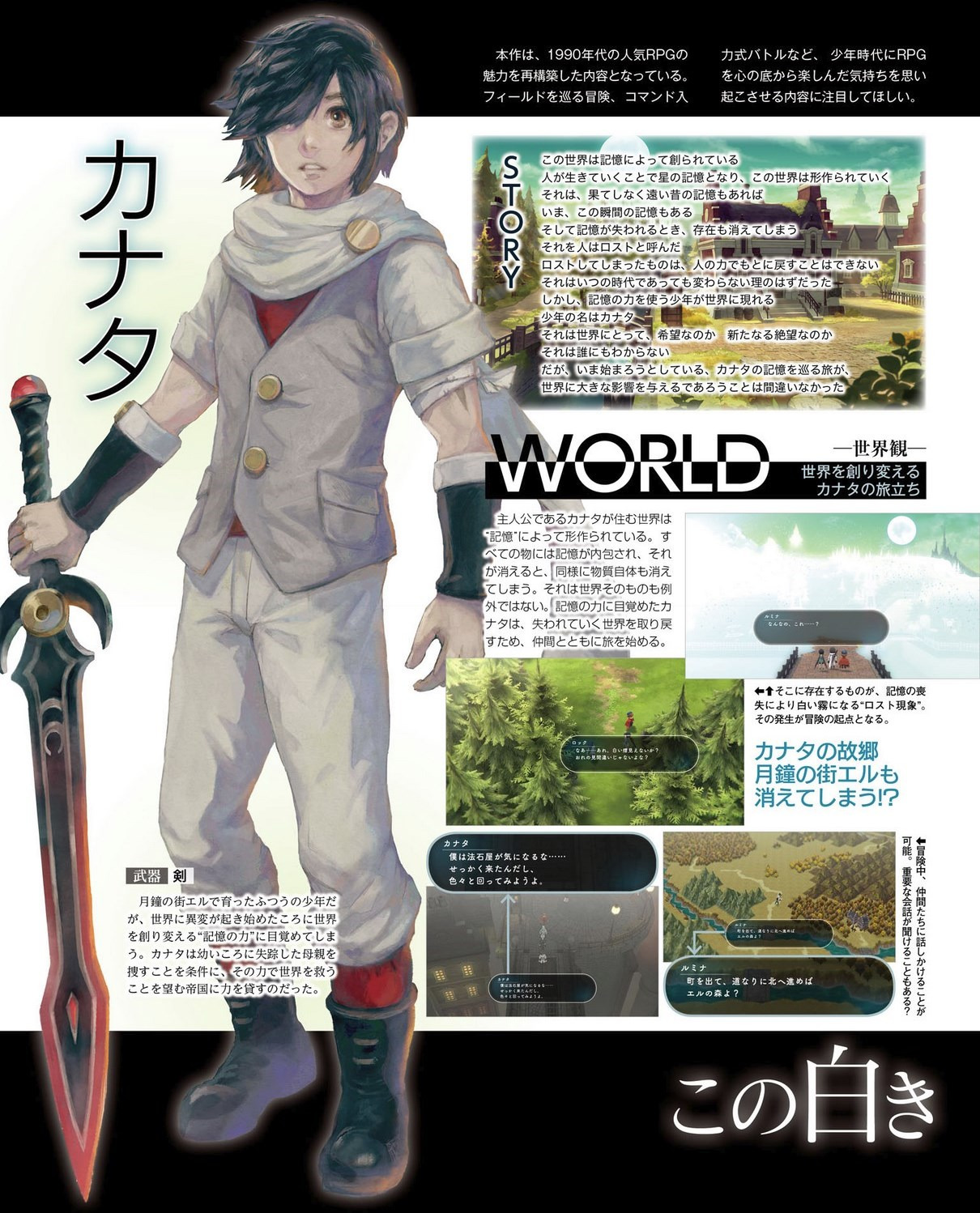 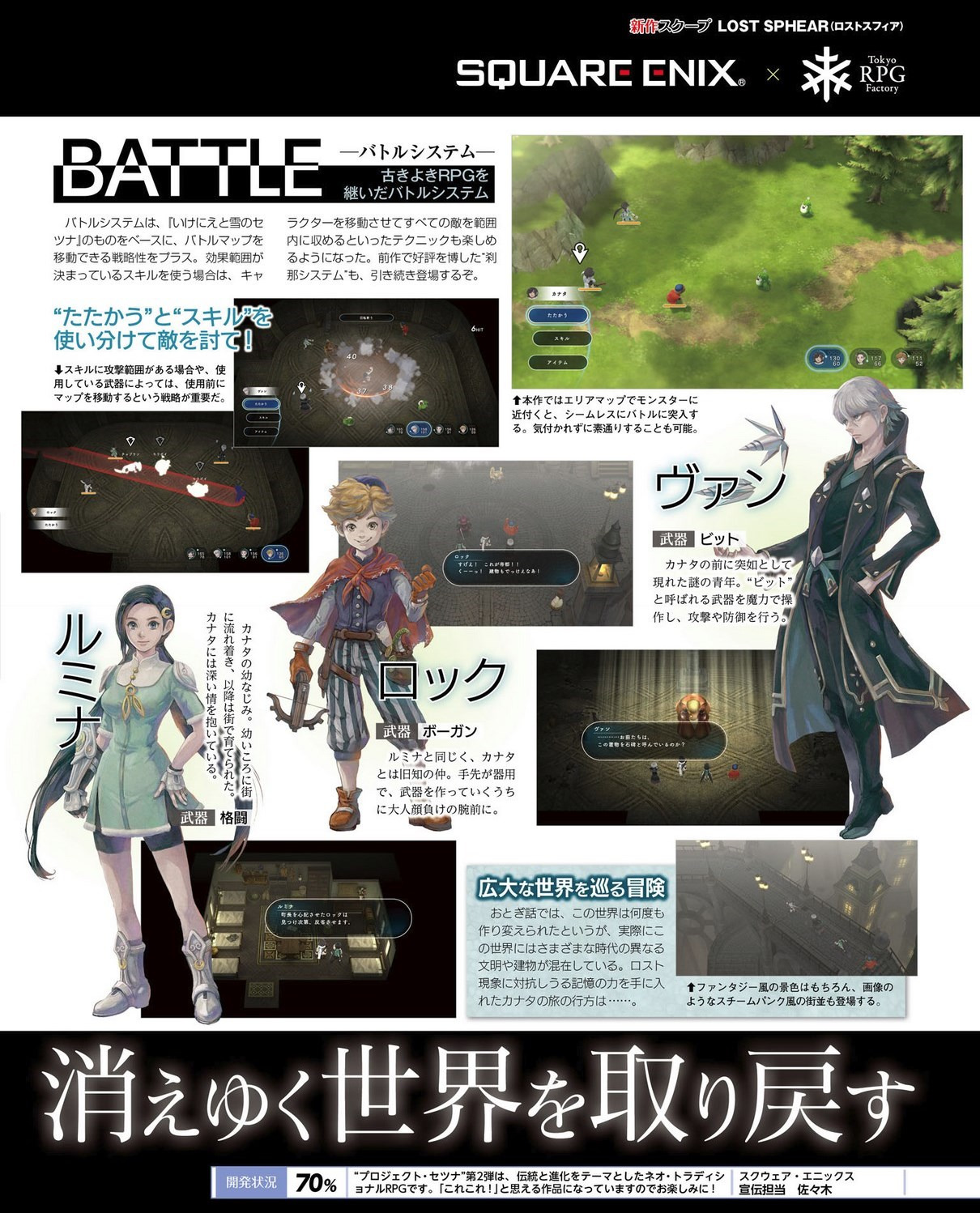 It is said that the moon created the world…

I heard such a fairy tale a long time ago…

It was around the time when my mother was still around…

It is said that the world often disappeared, and that it was often reborn…

Even now, I still remember. The “moon” depicted in my picture book…

But, that is a fairy tale. The moon does not say anything, it does not do anything…

That was truly a long time ago…

This world is created by Memories.

By living, people become Memories of the planet, which is how this world takes form. Even now if there are memories from the everlasting remote past, those are Memories of this moment as well.

And when Memories are lost, their existence is also erased. That is what people call “Lost.”

Things that are Lost originally could not be restored by the power of humans. This way of things was supposed to stay the same throughout the generations.

However, a young man who uses the power of Memories appears in the world. That young man’s name is Kanata.

Whether he will bring hope or new despair to the world is something that remains to be seen.

But there is no mistake that Kanata’s journey surrounding Memories that is now beginning will have an impact on the world.

The “Lost” phenomenon had suddenly hit Kanata and others’ hometown, the lunar bell town of Eru. The phenomenon instantly turns something that currently exists into a white fog, and then it disappears. This phenomenon, a result of Memory loss, is beginning to occur all over the world… The Setting of the Adventure

In Lost Sphear, you will move between various areas on the world map. In this world created by Memories, there are a great number of settings rich in variety and mixed with various cultures. Just like I Am Setsuna, the battle system for Lost Sphear is based on Chrono Trigger‘s Active Time Battle 2.0 system. You will enter battle seamlessly from the area map. You will encounter monsters on the area map, and the battle will begin when you approach them. Since you choose commands, you can carefully clear each fight while observing the battle situation.

Move Around in Battle

In Lost Sphear, you can move around any character during battle. This way you can utilize the characteristics of your weapons and magic to enjoy a much more strategic battle. Move to a position where several monsters are in your line of shot and attack with the crossbow. You will succeed by dealing damage to all the enemies in the shooting line. By moving into different positions when using ranged attack skills, you can be sure to deal damage to every enemy. A boy who grew up in the lunar bell town of Eru. You get the impression that he has matured based on his calm personality, but he has a burning spirit within him and his honest, childlike nature still remains.

While he is self-taught, his ability with a sword can compete even against Imperial soldiers, and his role becomes to exterminate the monsters that sometimes appear in town.

When the phenomenon occurs in Eru, Kanata awakens to his power to change the world through Memories, and the Empire asks for his cooperation in investigating the Lost phenomenon occurring all throughout the world.

If his power is of use to the world, he will decide to cooperate with the Empire and go on a journey across the world under the condition that they help him find his mother, who disappeared when he was little. Kanata’s childhood friend and a girl who drifted into Eru when she was little.

She is average in both physical ability and magical disposition, but she accompanies Kanata and the others as an escort using her self-taught melee techniques.

While there are times when she throws her fists at Kanata and Locke, whom she is close friends with, she is really a polite and gentle girl who is considerate of her opponents.

When she first came to town, she neither laughed or cried, but she gradually regained her emotions by meeting Kanata.

For that reason, she shows deep affection for Kanata, but whether it is an affection of friendship or one of love is something that even she herself does not know. Kanata’s childhood friend and a boy who lives in the lunar bell city of Eru. He is younger than Kanata and Lumina, but has a cheerful and lively personality, often finds himself taking actions that lead those two along.

He is good with his hands and can make a crossbow as if he is making a toy, becoming skilled in the craft before he knew it as he accompanied Kanata and Lumina on their monster exterminations.

While he does not openly announce it, his father hold a highs office in the Empire, and his identity is secret. However, he has a complex in that he never met his father. Based on his desire to meet his father, he cooperates with the Empire and chooses to act alongside Kanata, who leaves the town. A young man who suddenly appeared in the lunar bell town of Eru. He seems to know something about the disaster that occurred in the town, but will not say much. While he says cold things, he is actually kind-hearted.

He uses mysterious weapons called “Bits” that do everything from attack to defend while being controlled with magical power. It is not a weapon anyone can use, as it quite difficult to master, but is controlled through outstanding concentration and shows overwhelming capabilities in combat.

Since seeing Kanata’s awakening with his own eyes, he took on a cooperative stance and will ultimately head to the Empire with Kanata and the others.