[PS4/Vita/PC] Utawarerumono: Mask of Deception / Mask of Truth / Prelude to the Fallenla trilogia completa in occidente

About
Originally known as Utawarerumono: Itsuwari no Kamen in Japan, Mask of Deception is a grand tale meant to enchant the hearts and minds of players in search of incredible journey. The game begins atop a snowy mountain where the protagonist awakens in an unfamiliar wilderness, surrounded by deadly creatures, with nothing but a hospital gown and a splitting headache. However, he’s eventually rescued by a beautiful girl named Kuon, who sports both adorable animal ears and a beast-like tail. Finding that the hapless man has no memory of anything, Kuon decides to take the amnesiac into her care, naming him Haku. As their journey takes them across the land, Haku will (reluctantly) encounter colorful characters (yes, that means more animal people), build deep relationships, battle ruthless enemies, and find himself inexorably dragged into the political machinations of the mighty nation of Yamato.
Features

Japanese Audio
Both Utawarerumono: Mask of Deception and Utawarerumono: Mask of Truth will feature English text and the original Japanese audio.
Small Content Edit
A brief note on content: While Atlus is committed to bringing over games that are as true to their original forms as possible, in the case of Mask of Deception, a scene had to have a small content edit to comply with various regional regulations about the depiction of physical discipline to minors. We worked with Aquaplus to keep the scope of the editing to an absolute minimum, and we both agree the change made to the scene in the game still conveys its full meaning without running into issues. 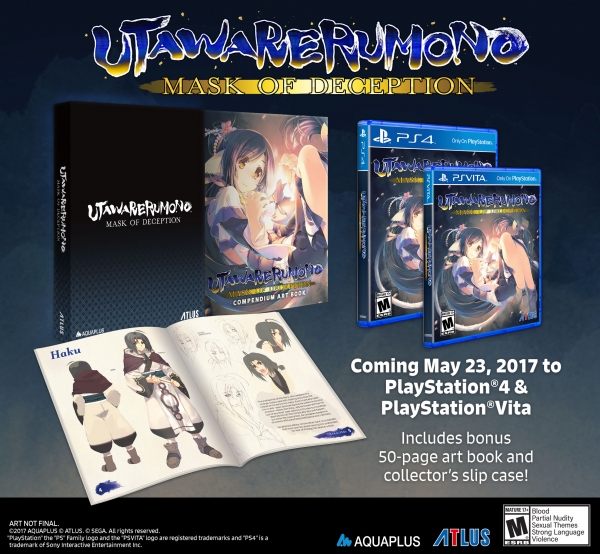 Atlus also announced two downloadable content characters that will launch day and date with the game: the sword-wielding Tamaki and the spear-thrusting Sasara. They’ll each be available in two varieties:

Trailer per Utawarerumono: Mask of Truth: