The story follows nine protagonists and progresses in a way that players switch between characters. The story will develop from the perspectives of these characters, who each have different standpoints and environments. The game is set in a continent ruled by magic beings and divided by the effects of a “distortion.” Rain worlds and fire worlds are just a couple of the hostile worlds that players will visit. 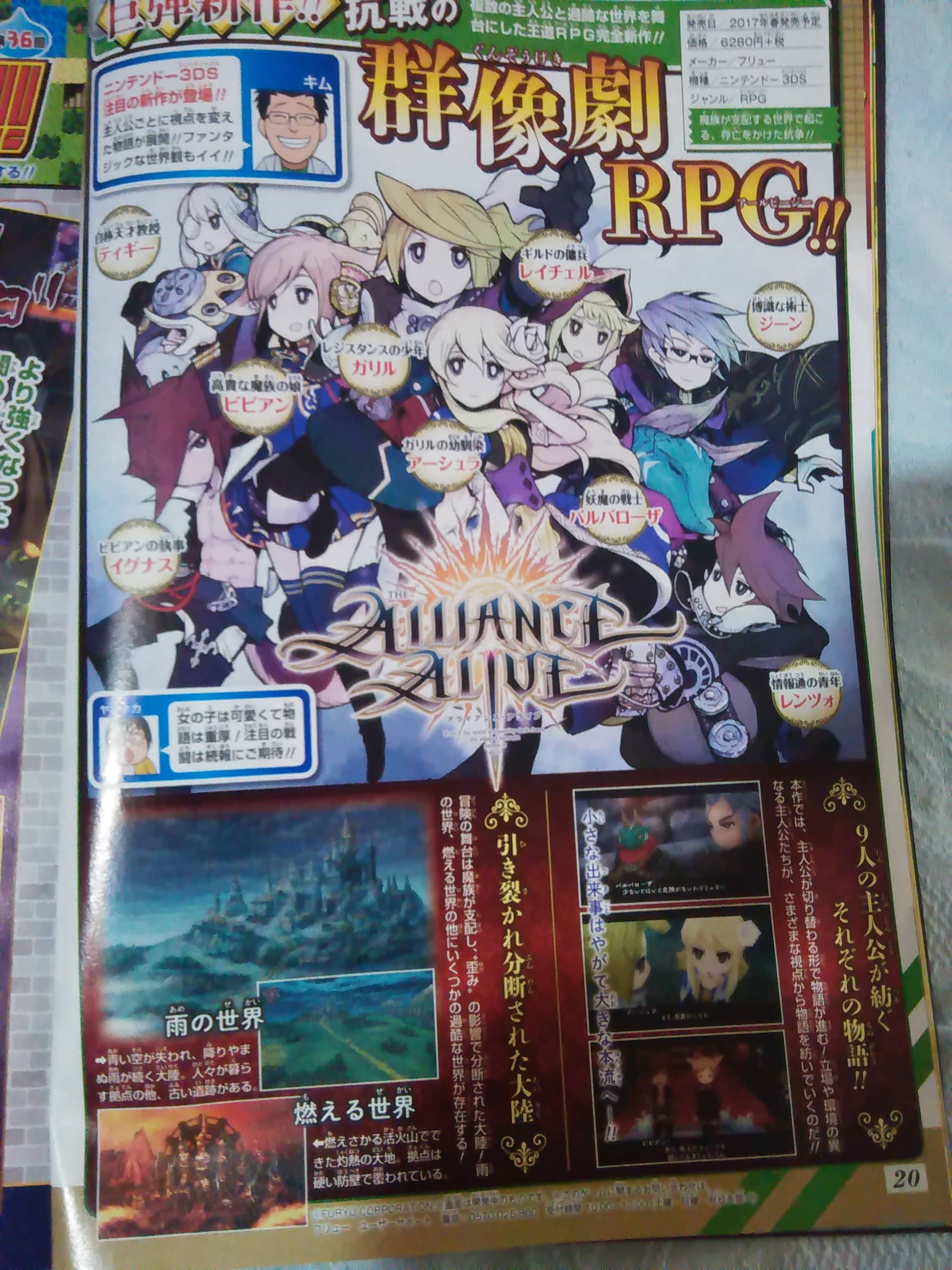 The Alliance Alive is a a “new classic RPG,” or a title that approaches the classic RPG elements and rebuilds them with the latest technology. The story depicts the efforts of humans who go against that authority of the magic beings that have ruled over the world for several thundreds of years. It is set in a world divided into several zones that have formed unique cultures. Players control the protagonists and move about a field map, and battles begin when an enemy symbol is encountered. There are nine main characters total, who are all protagonists, and start their journeys with different goals, before long converging into a single objective.

Here’s an overview of the main characters:

Famitsu also has an interview with the staff. Here are a few tidbits:

The game’s key staff is as follows: 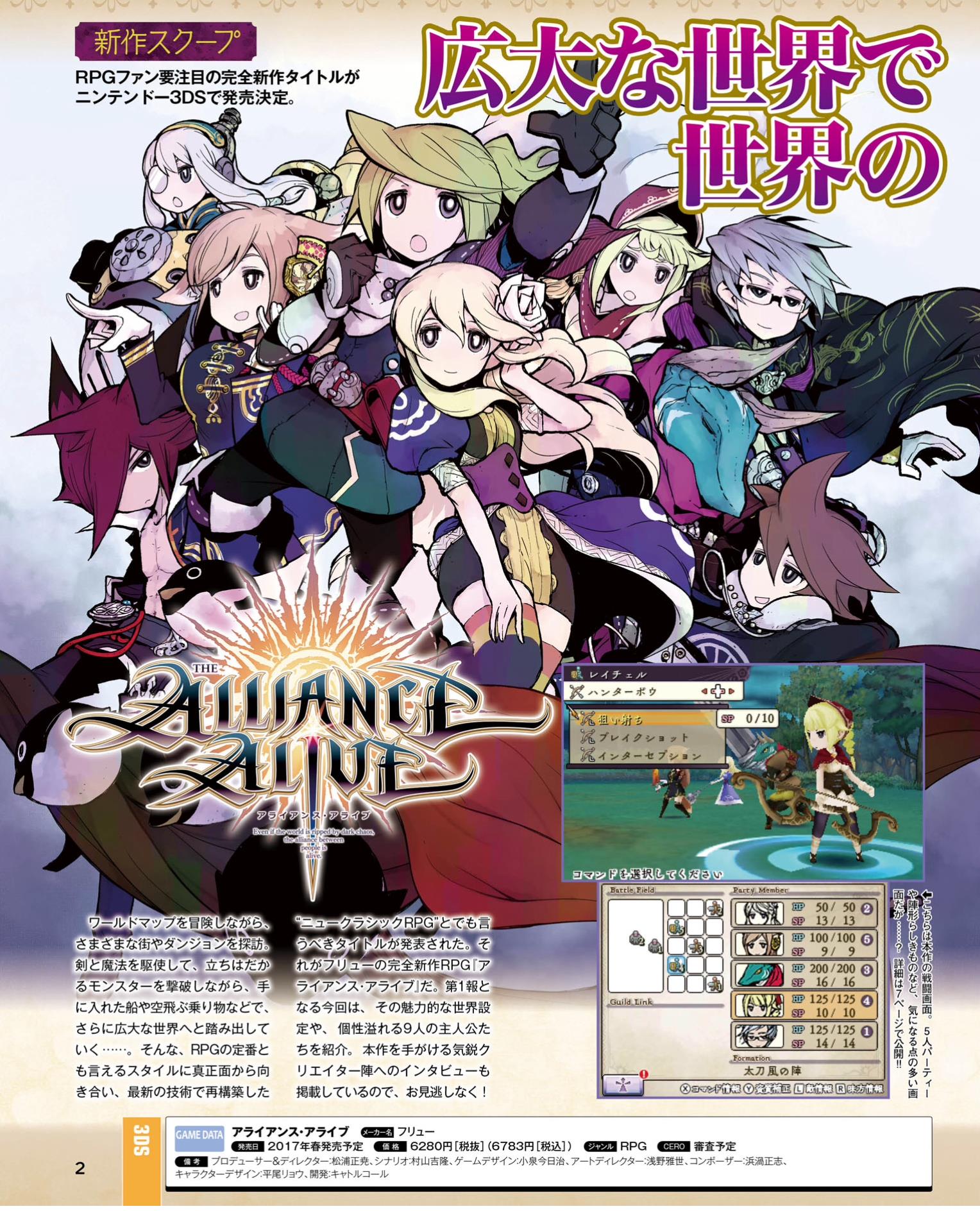 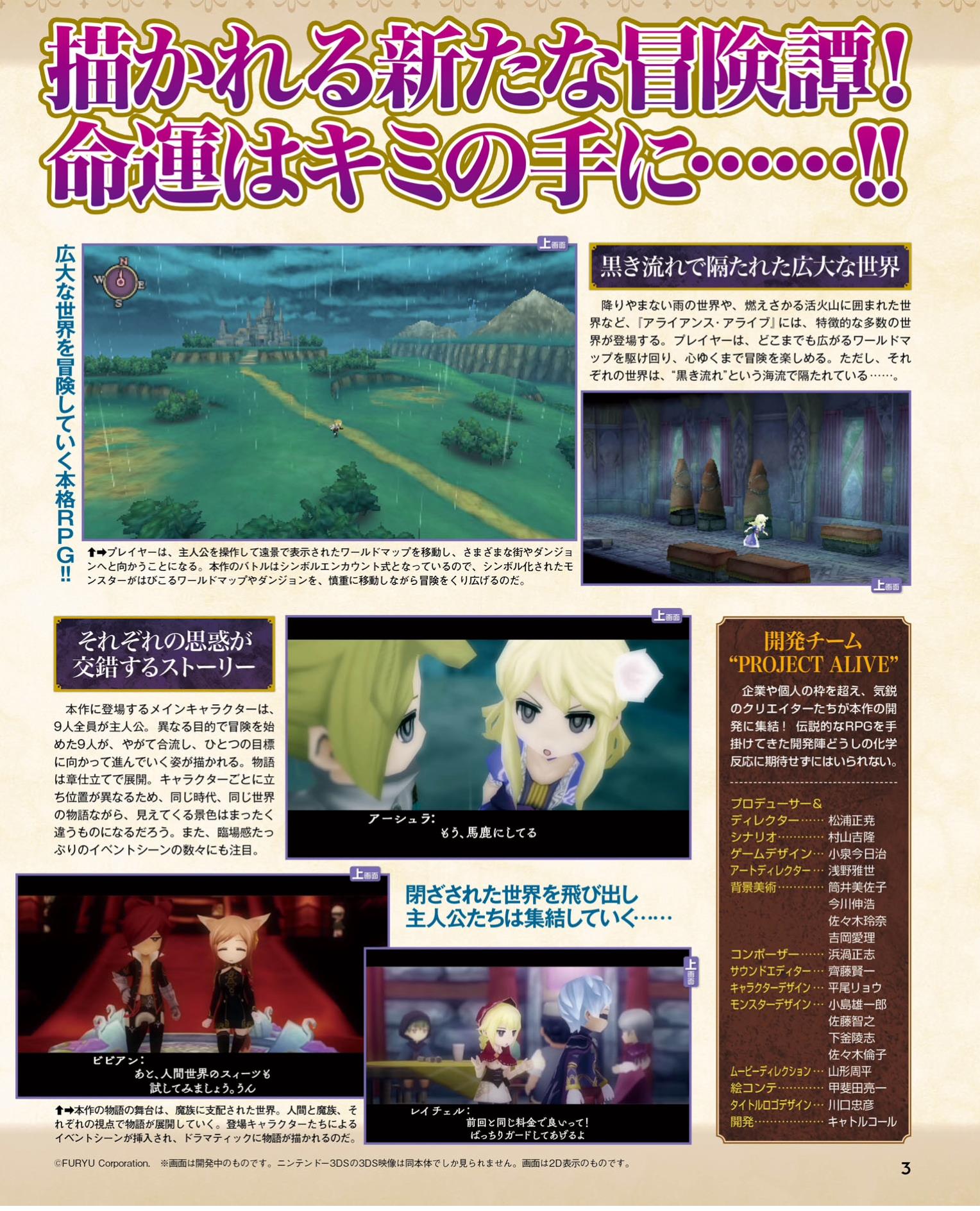 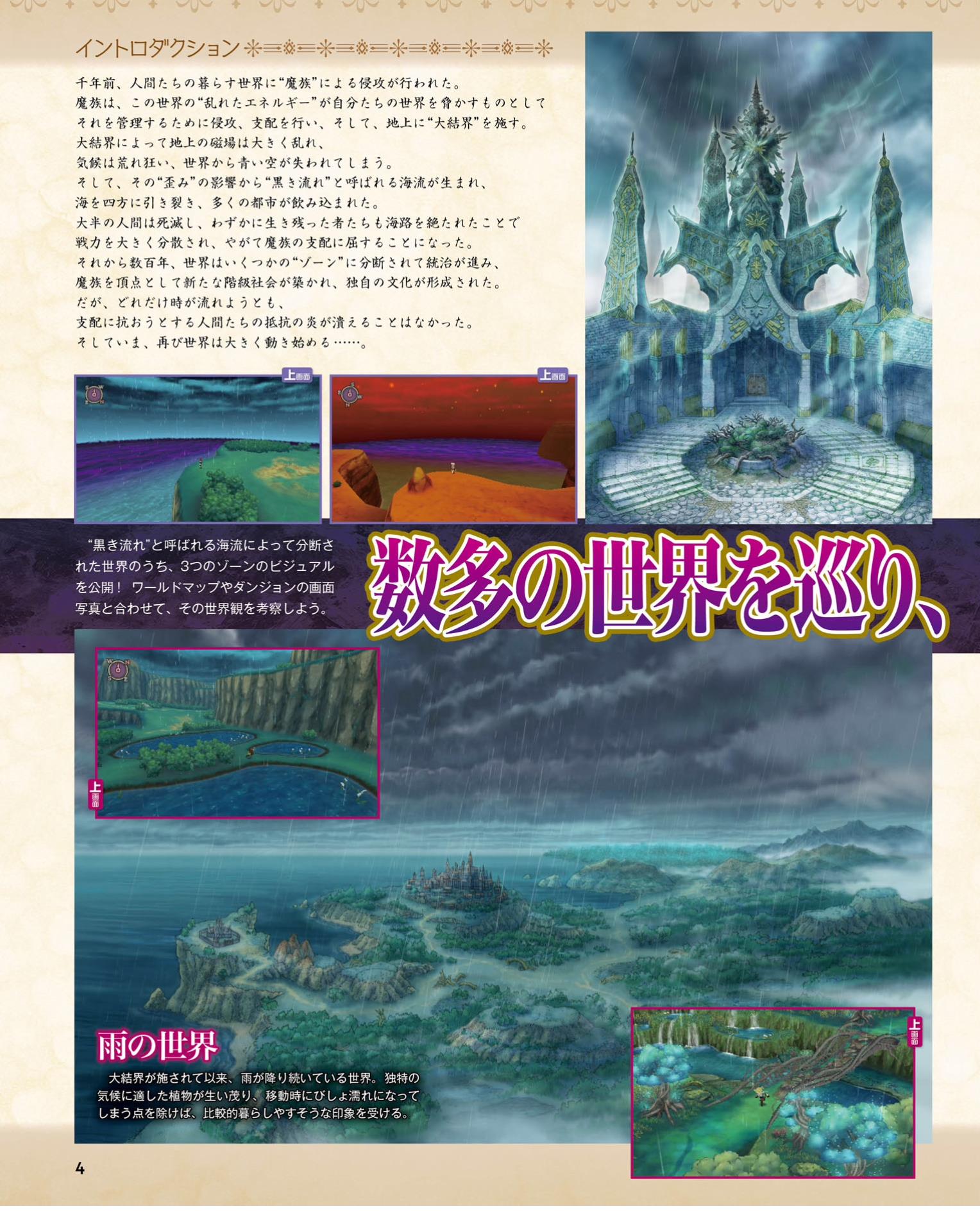 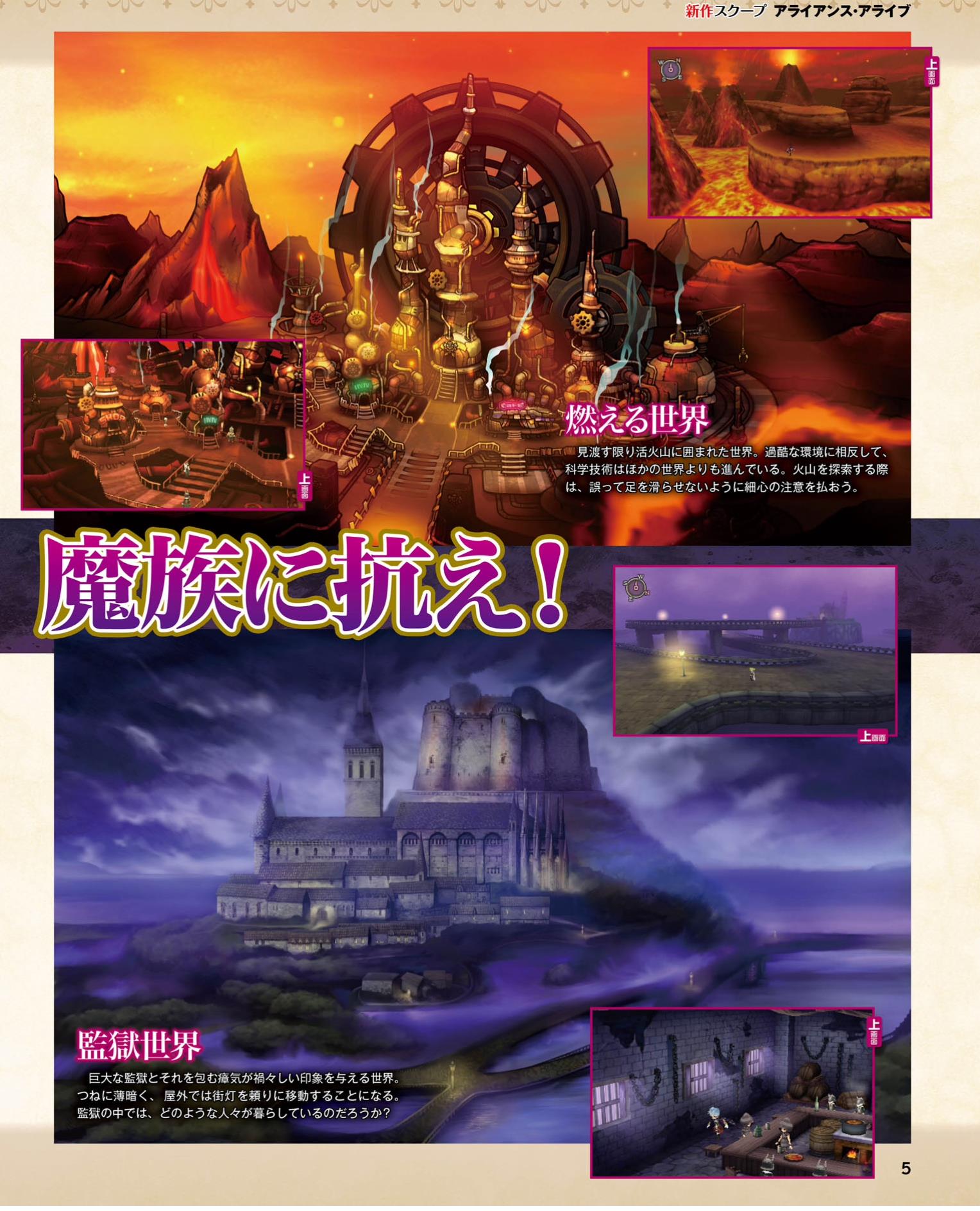 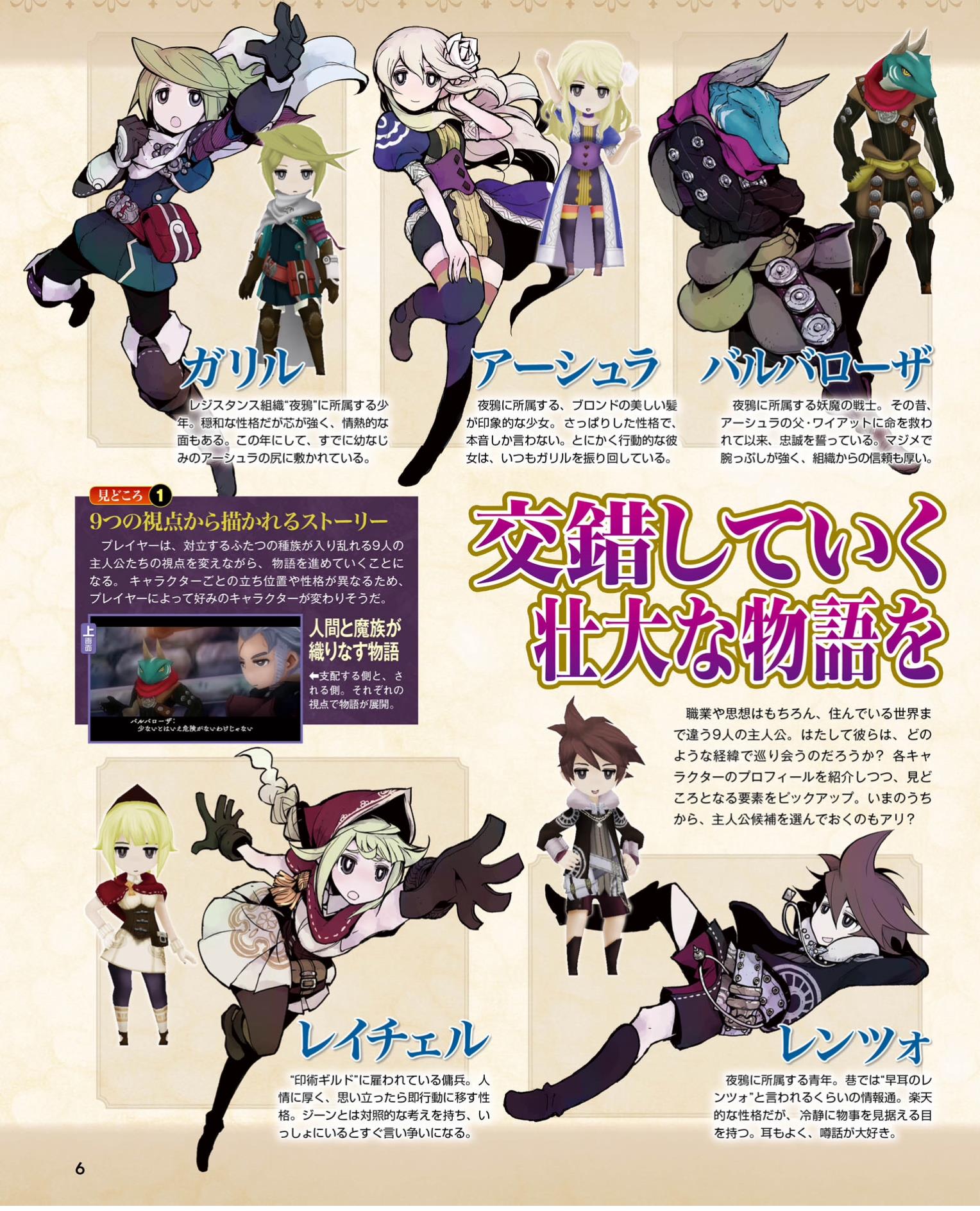 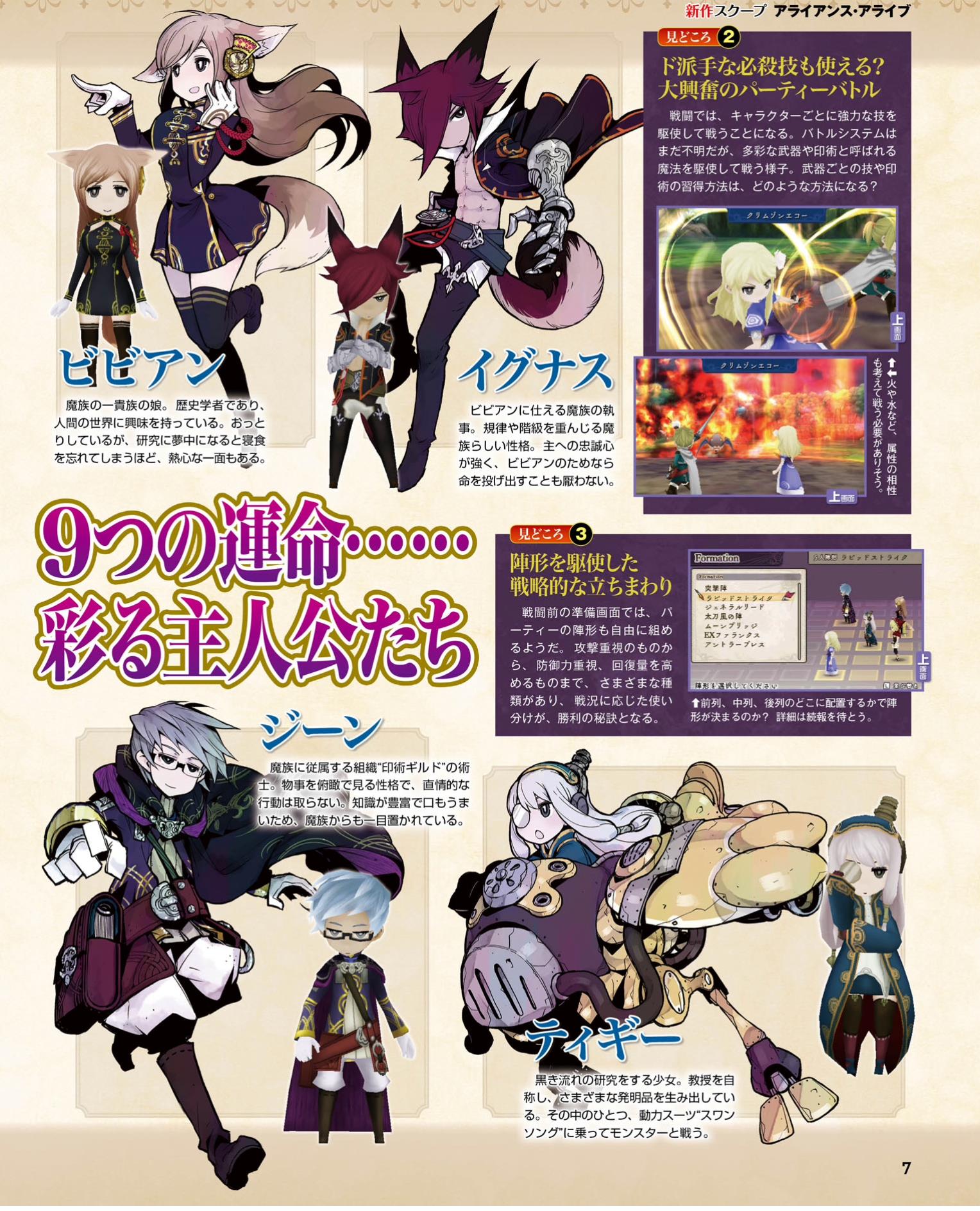 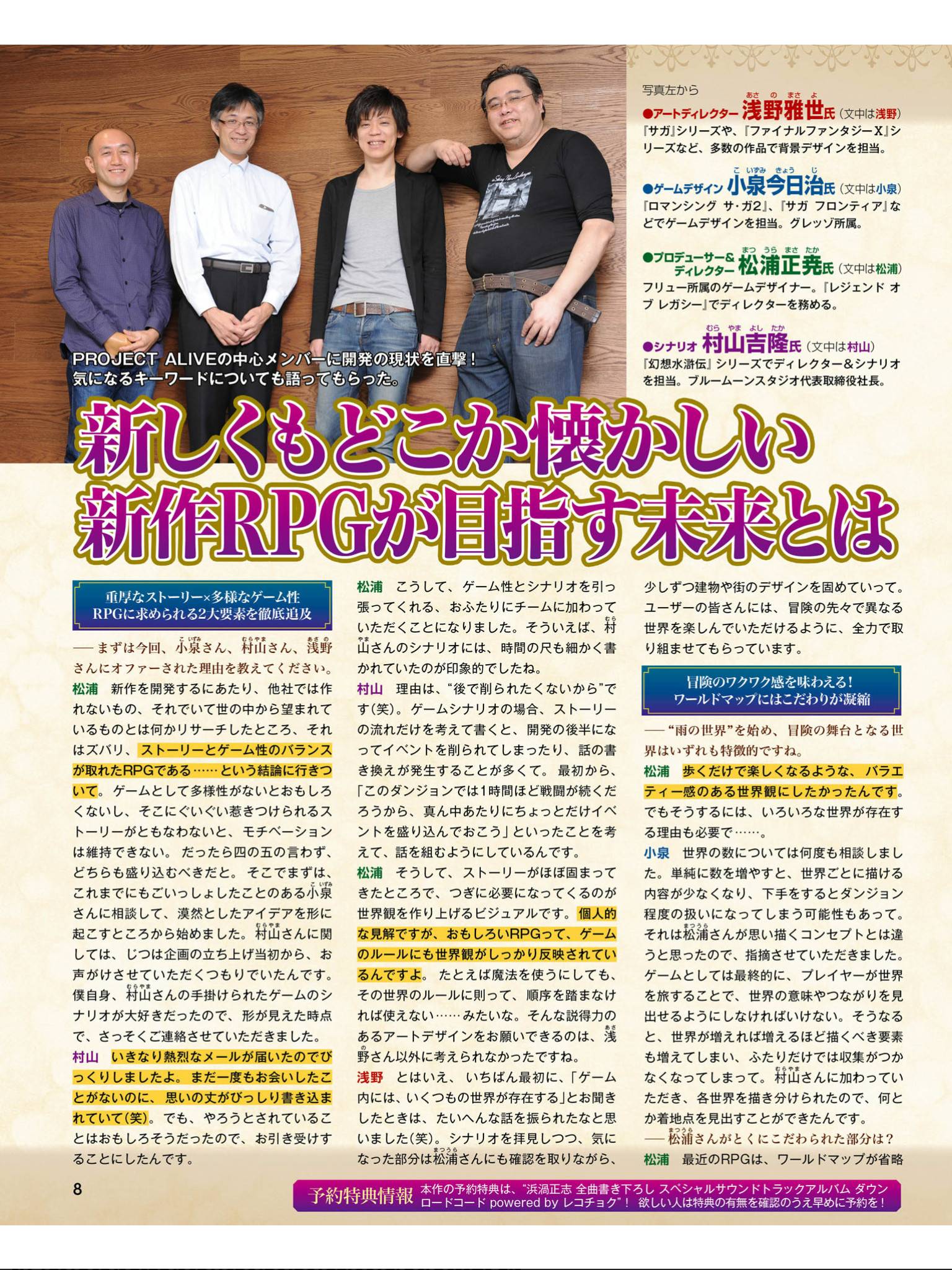 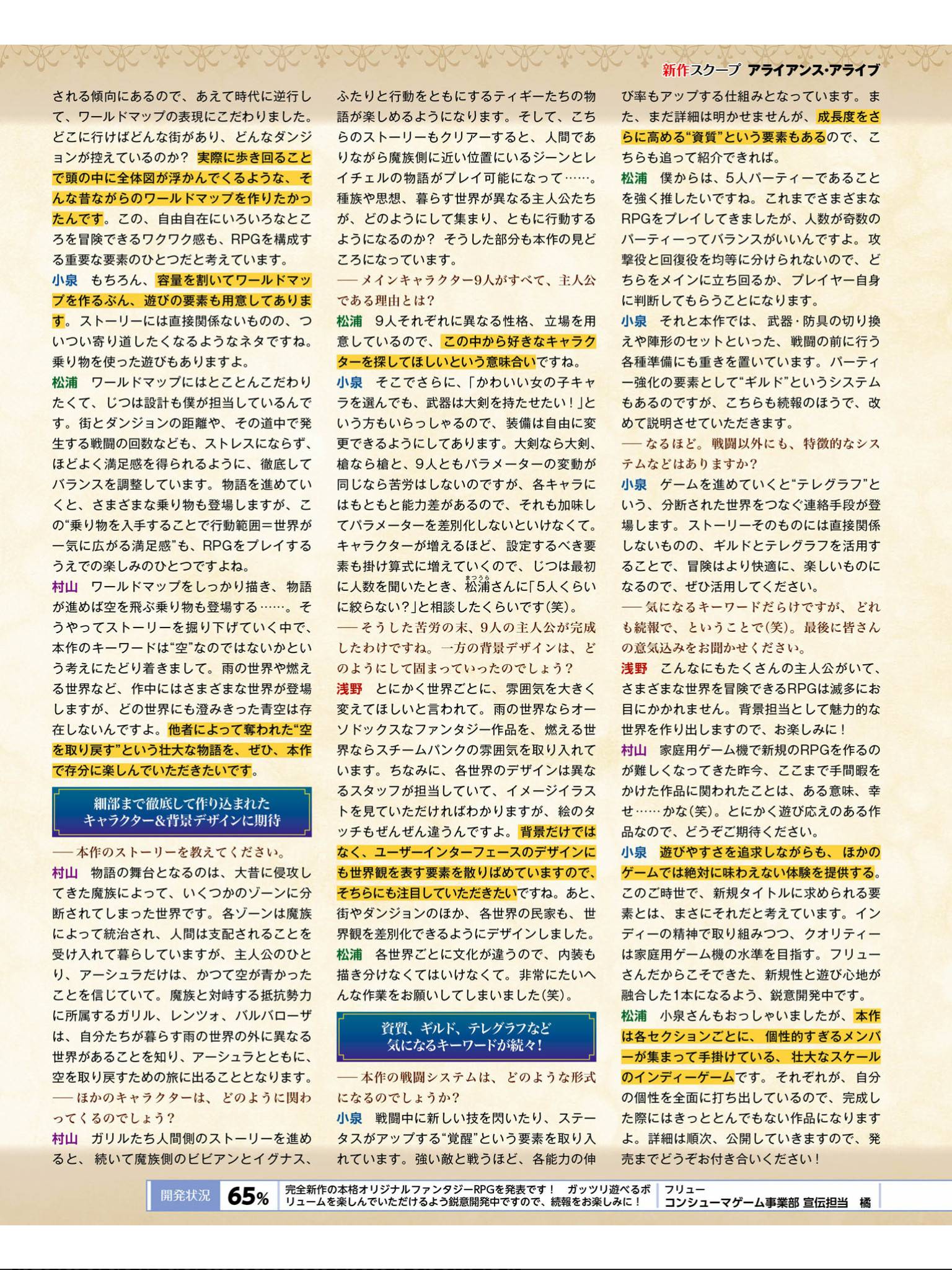 Thousand of years ago, the world inhabited by humans was invaded by “Asmodians.” Asmodians invaded in order to take control of this world’s “Chaos Energy”—something that threatens their own world—became rulers, and applied a “great barrier” to the earth.

The great barrier caused a major disturbance to the earth’s magnetic field, leading to raging climates and the “blue sky” to be lost from the world.

As an effect of this distortion, the ocean known as “The Dark Chaos” was born. It tore the sea in every direction and swallowed many cities.

Most humans were killed, and the little that survived had their forces significantly scattered by the severed sea route, and before long gave in to the rule of the Asmodians.

Several hundred years after, rule of the world has been divided into several “zones,” and a new hierarchical society has been built with the Asmodians at its forefront. A new culture was formed.

However, no matter how much time has passed, humanity’s flames of resistance have not burned out.

Now, the world is beginning to move once again—.

There is an ocean current known as “The Dark Chaos” in the seas of each “world” that splits the sea in every direction and severs the sea route, completely closing off outside communication. These independent worlds lived in by the people are ruled by Asmodians and called “zones.”

The player will proceed through the game while changing between the perspectives of nine characters of two conflicting races according to the story. The protagonists’ fates will gradually intersect and before long converge into a single story with everyone together. A boy who belongs to the “Night Crows” resistance group. He has a gentle personality, but a strong core and passionate side. This year already, he is under the thumb of his childhood friend Ursula. A girl who belongs to the “Night Crows” resistance group. She has a refreshing personality and does not speak her true intentions. She is always manipulating Galil.

A young man who belongs to the “Night Crows” resistance group. He is well-informed enough that the public refers to him as “Insider Renzo.” He is optimistic, but surprisingly composed. He has good hearing and loves gossip. A monster soldier who belongs to the “Night Crows” resistance group. Ursula’s father Wyatt once saved his life and he has sworn his loyalty since. He is both diligent and physically strong, and is deeply trusted by the group. The daughter of an Asmodian noble. As a historian, she has an interest in the human world, which is unusual for an Asmodian. She has a calm personality, but when she is engrossed in her research, she can sometimes get enthused to the point where she forgets to eat or sleep.

An Asmodian and butler who serves Viviana. He seems to be an Asmodian that values discipline and class, possessing great loyalty, and would not hesitate to sacrifice his life if it is for Viviana.

A girl studying the global threat known as “The Dark Chaos.” She is a self-proclaimed “professor” that has created various inventions. She battles monsters while riding her “Swan Song” power suit. A magic user who belongs to the “Magic Guild,” a subordinate of the Asmodians. He looks at things from a wide perspective and does not act impulsively. Because he is knowledgeable and well-spoken, his superiority is acknowledged by even the Asmodians.

A mercenary hired by the Magic Guild. She is very kind and the type of person to do something as soon as it comes to mind. Her way of thinking contrasts with Gene’s, and they often argue when together.

The Alliance Alive uses a turn-based command battle system where up to five party members can participate. It is a system that emphasizes tempo and features a fast forward function to move the fight up to four times faster. Enemy encounters are symbol-based, meaning a battle will begin when you’ve touched a monster on the field. 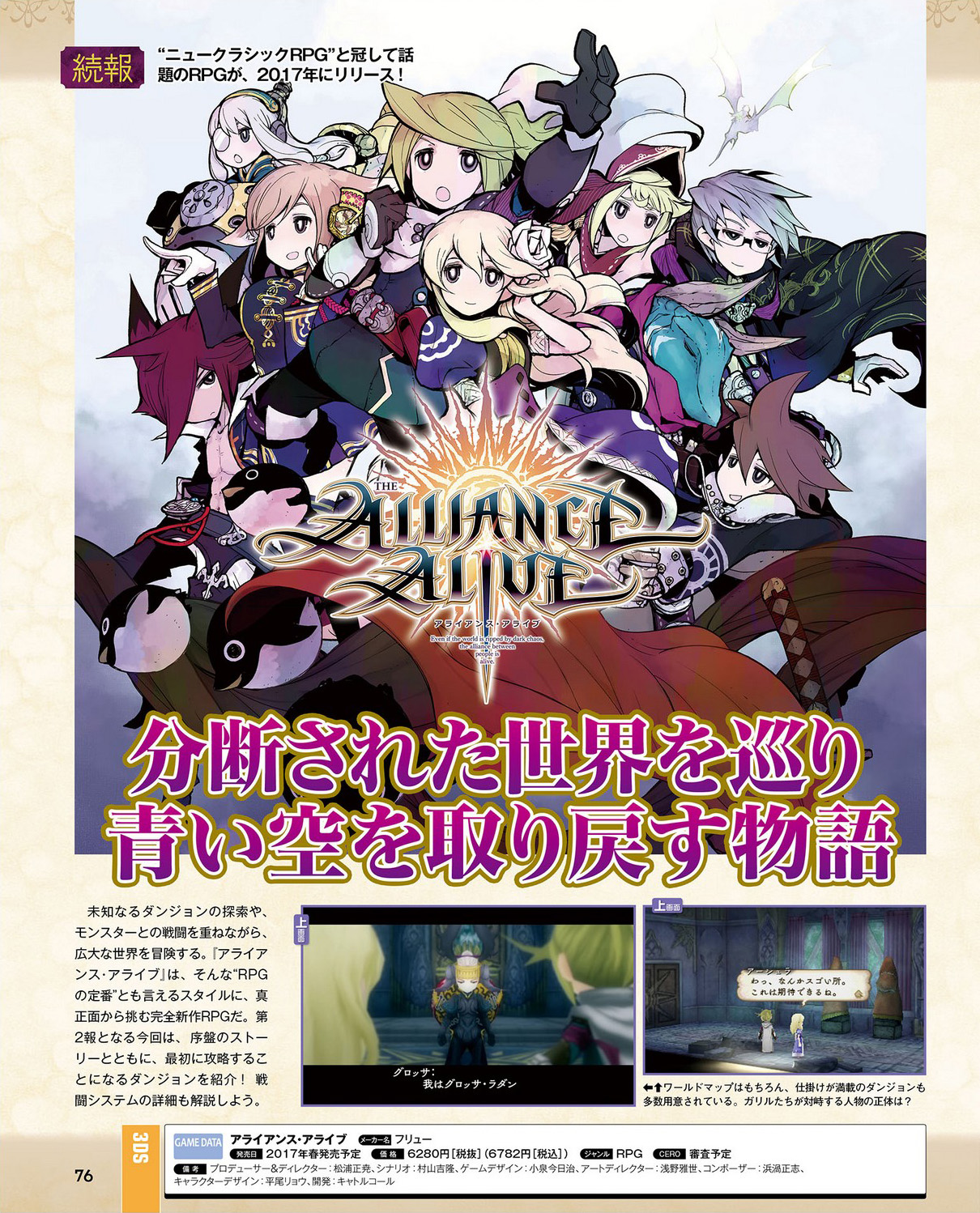 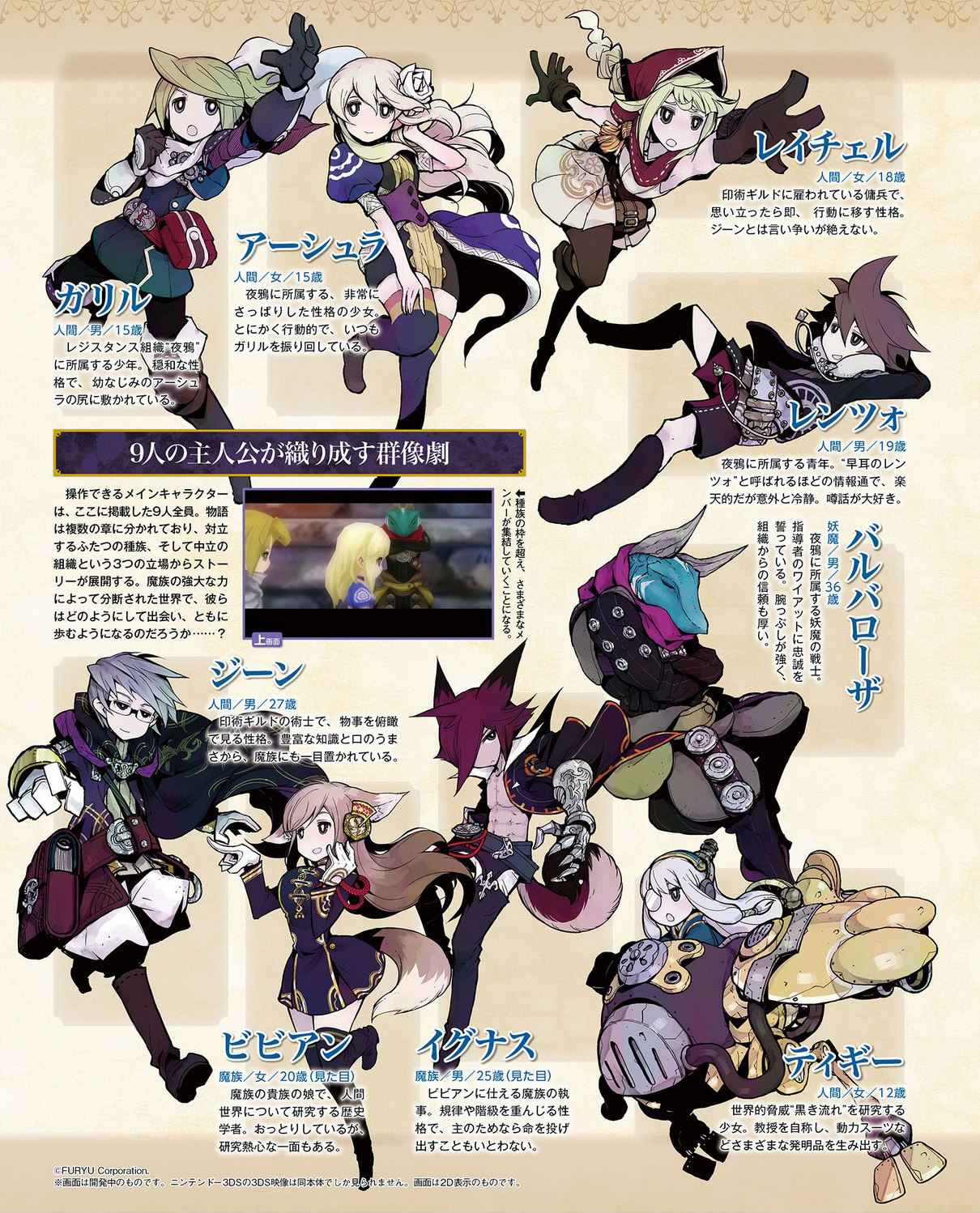 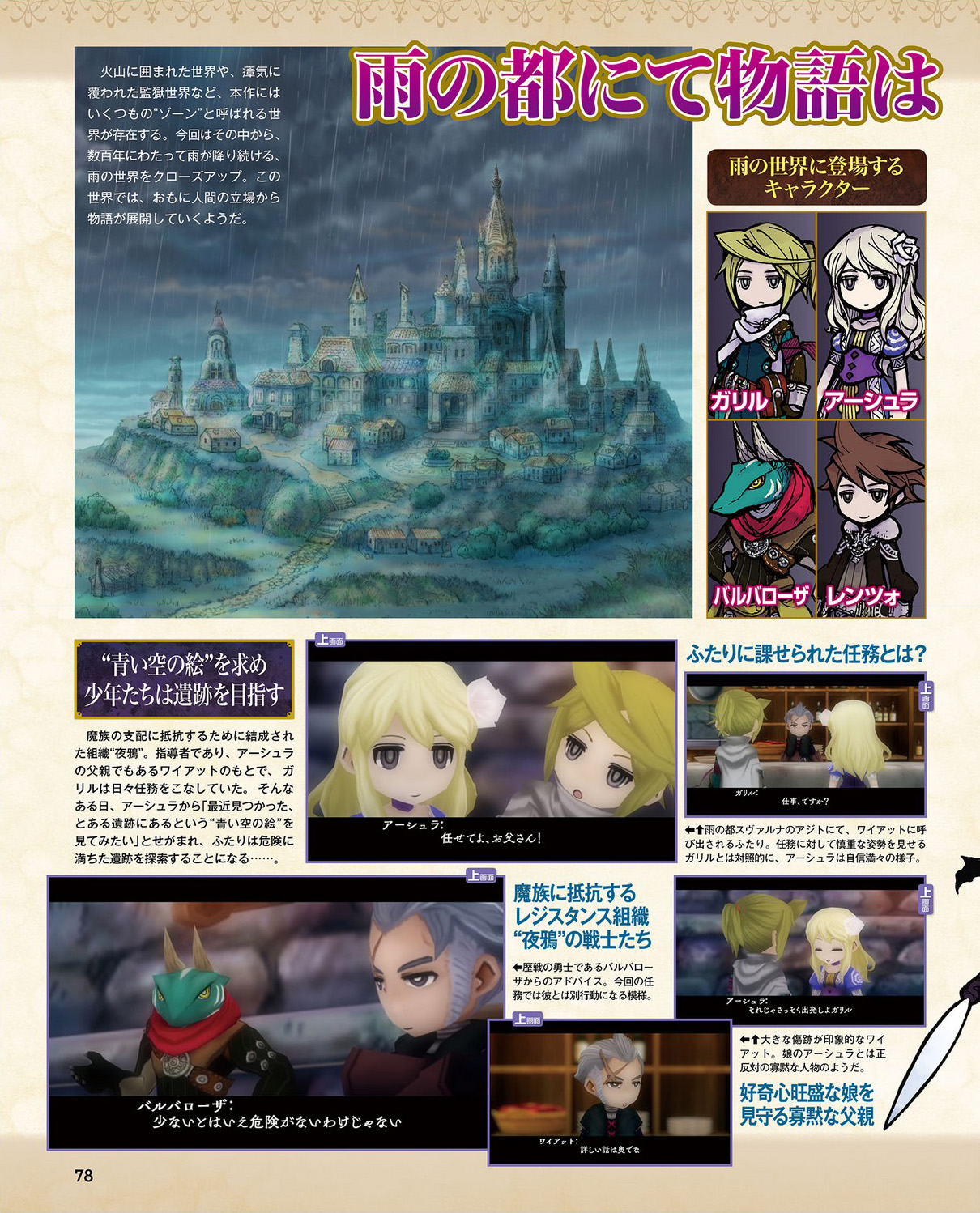 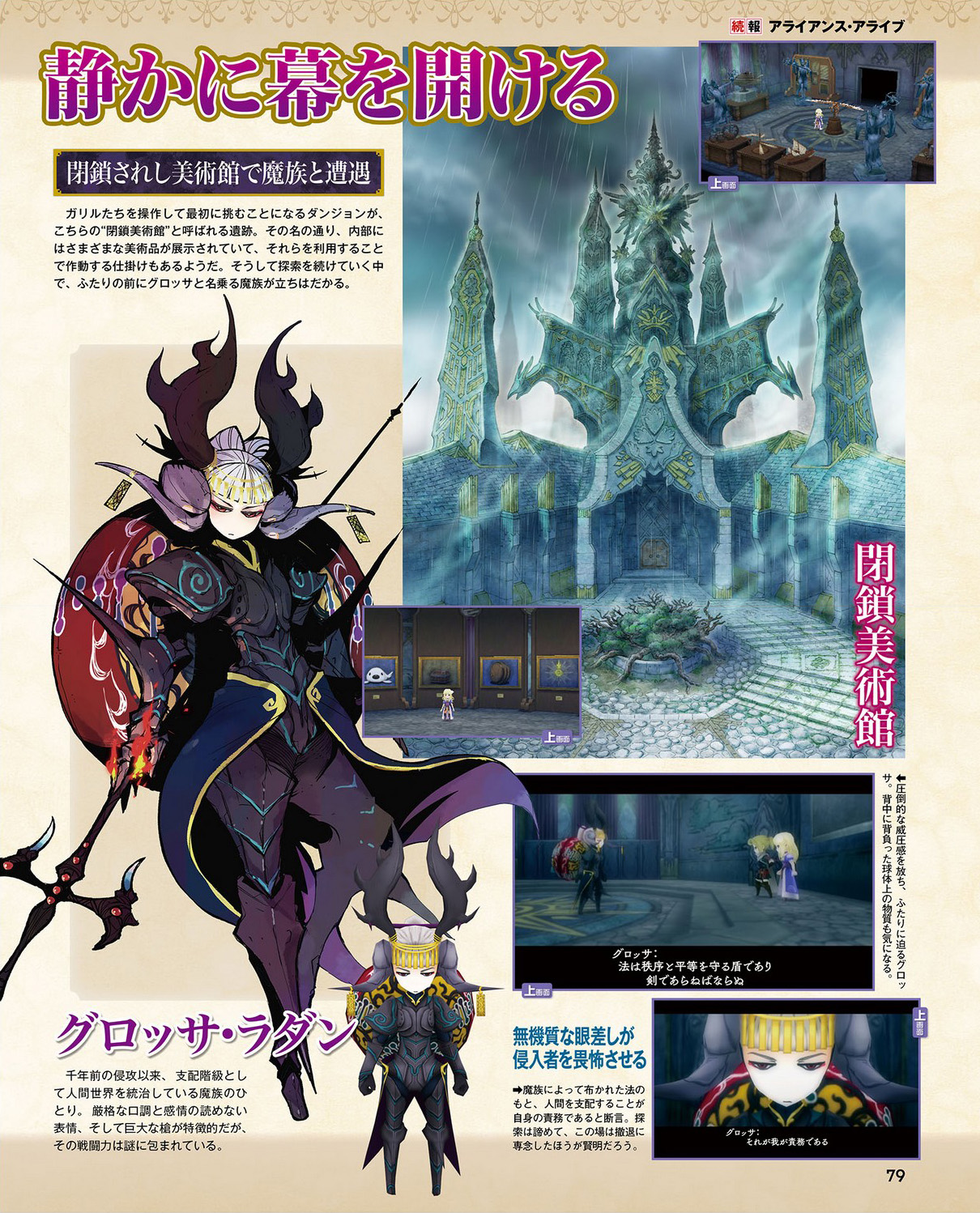 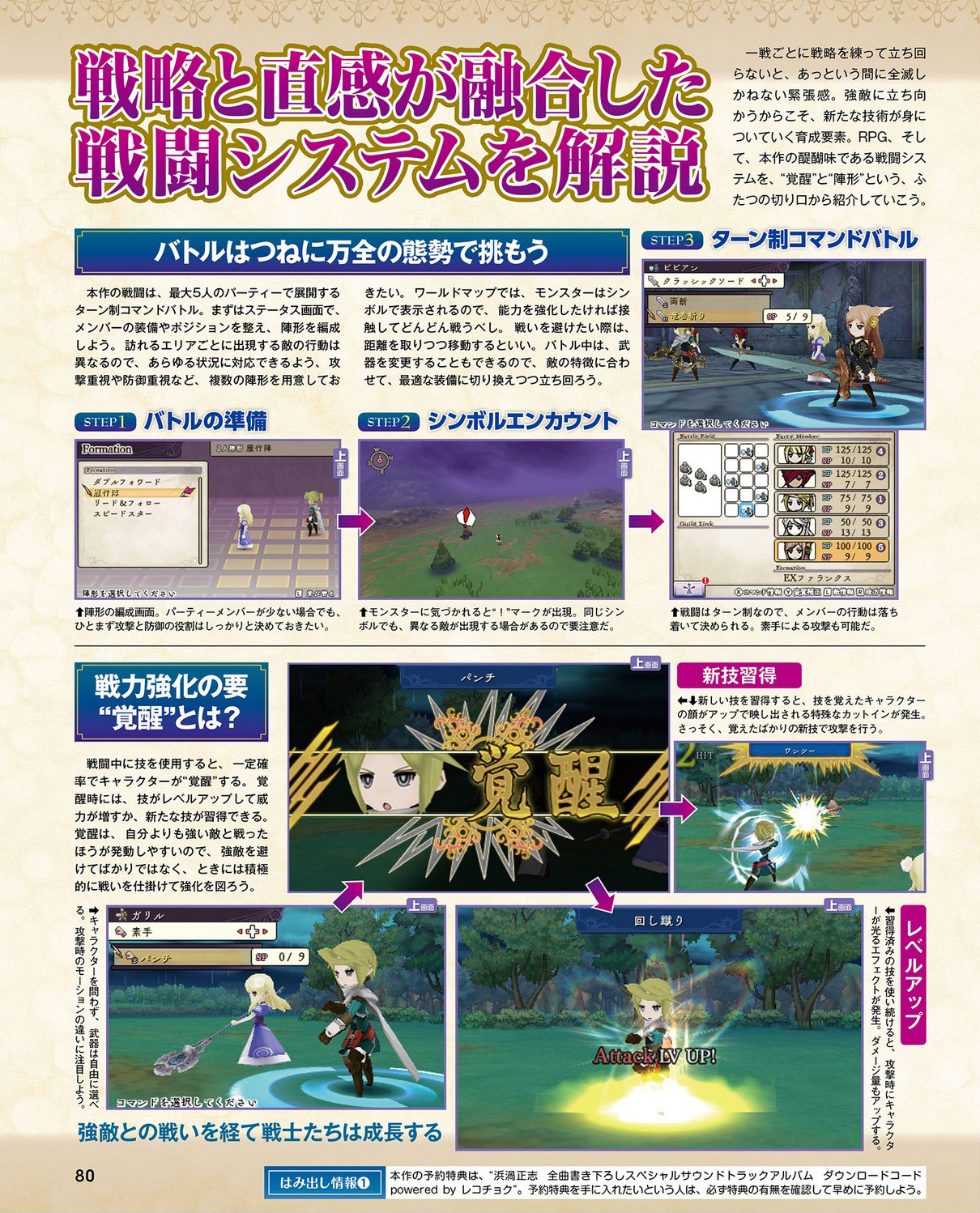 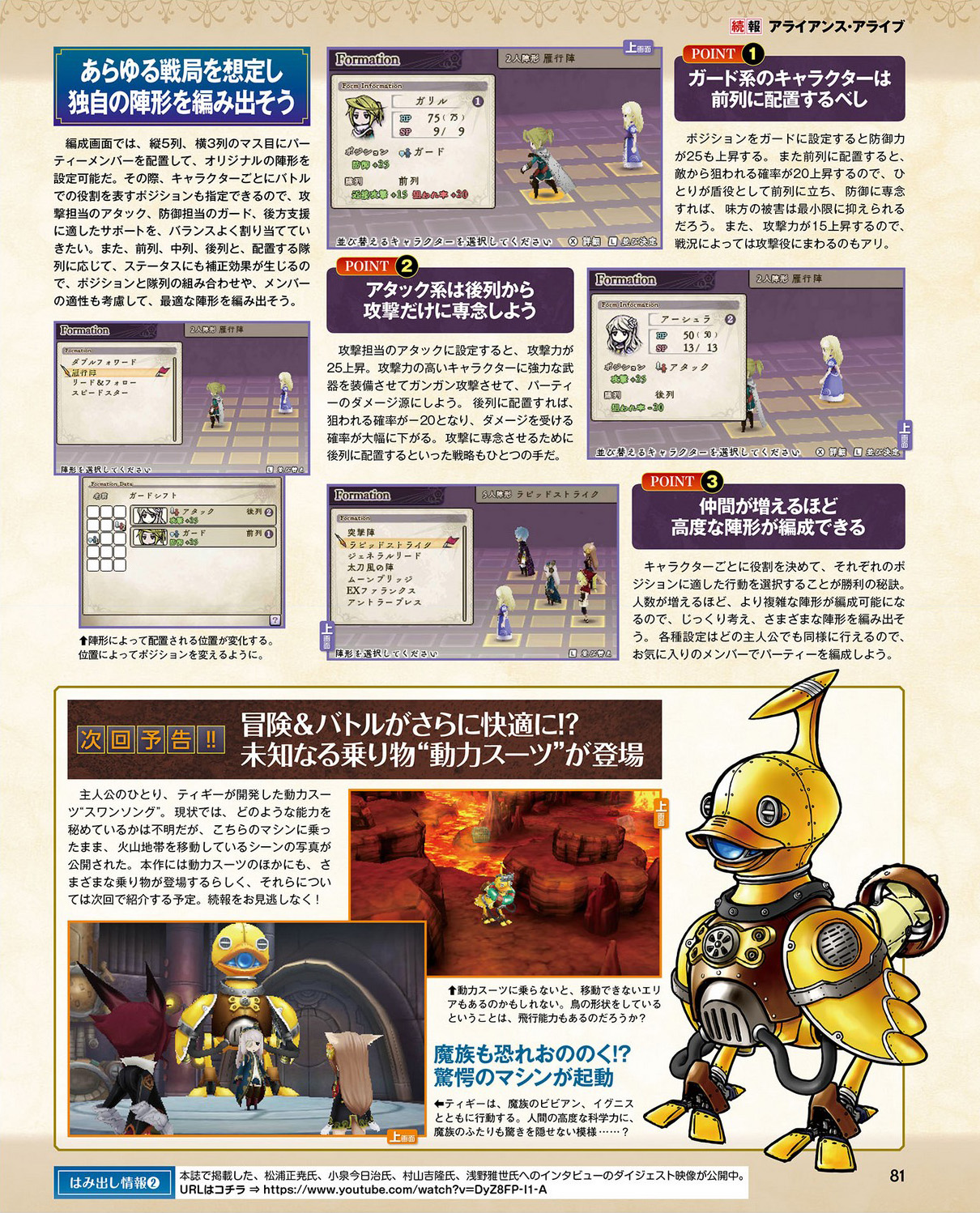 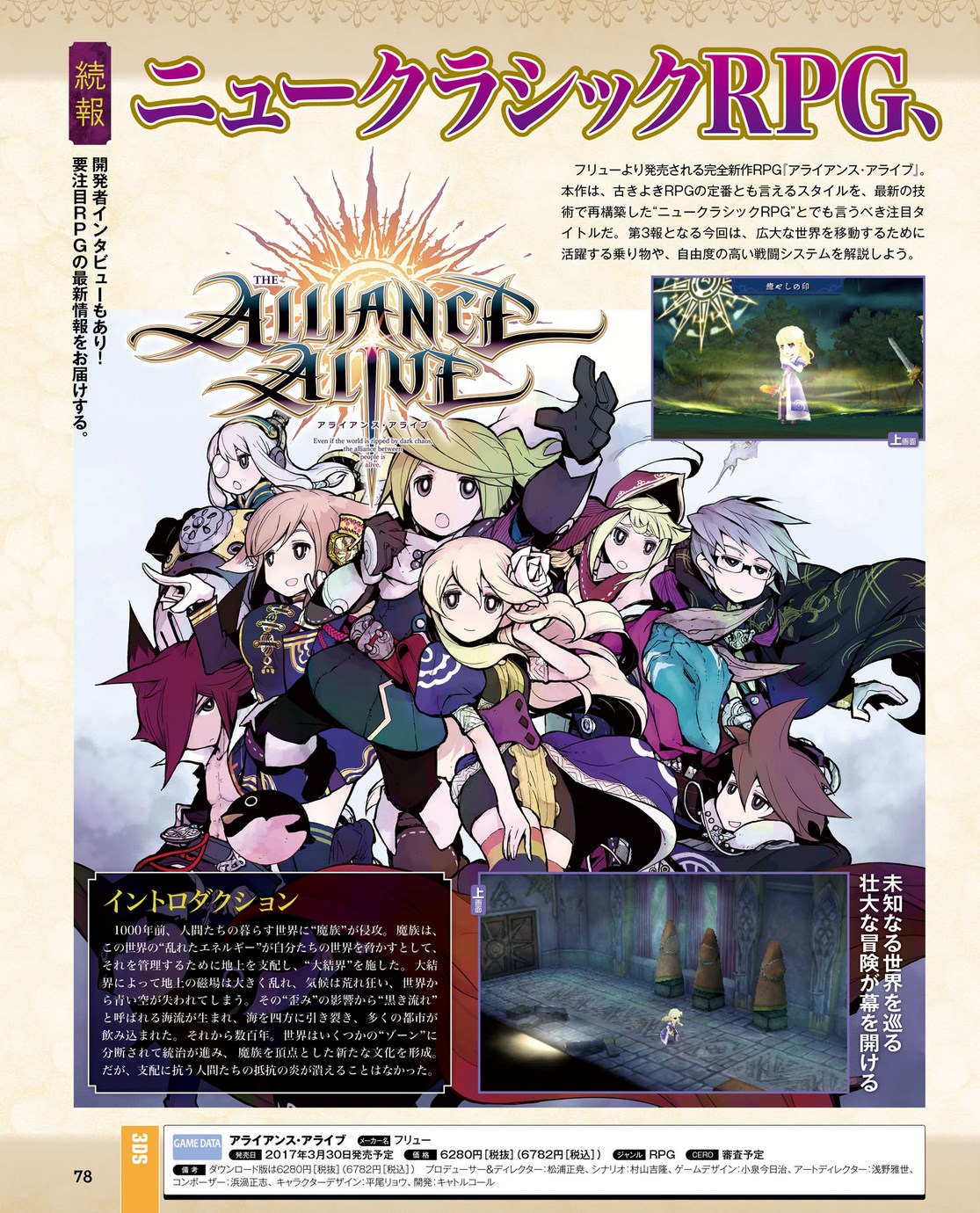 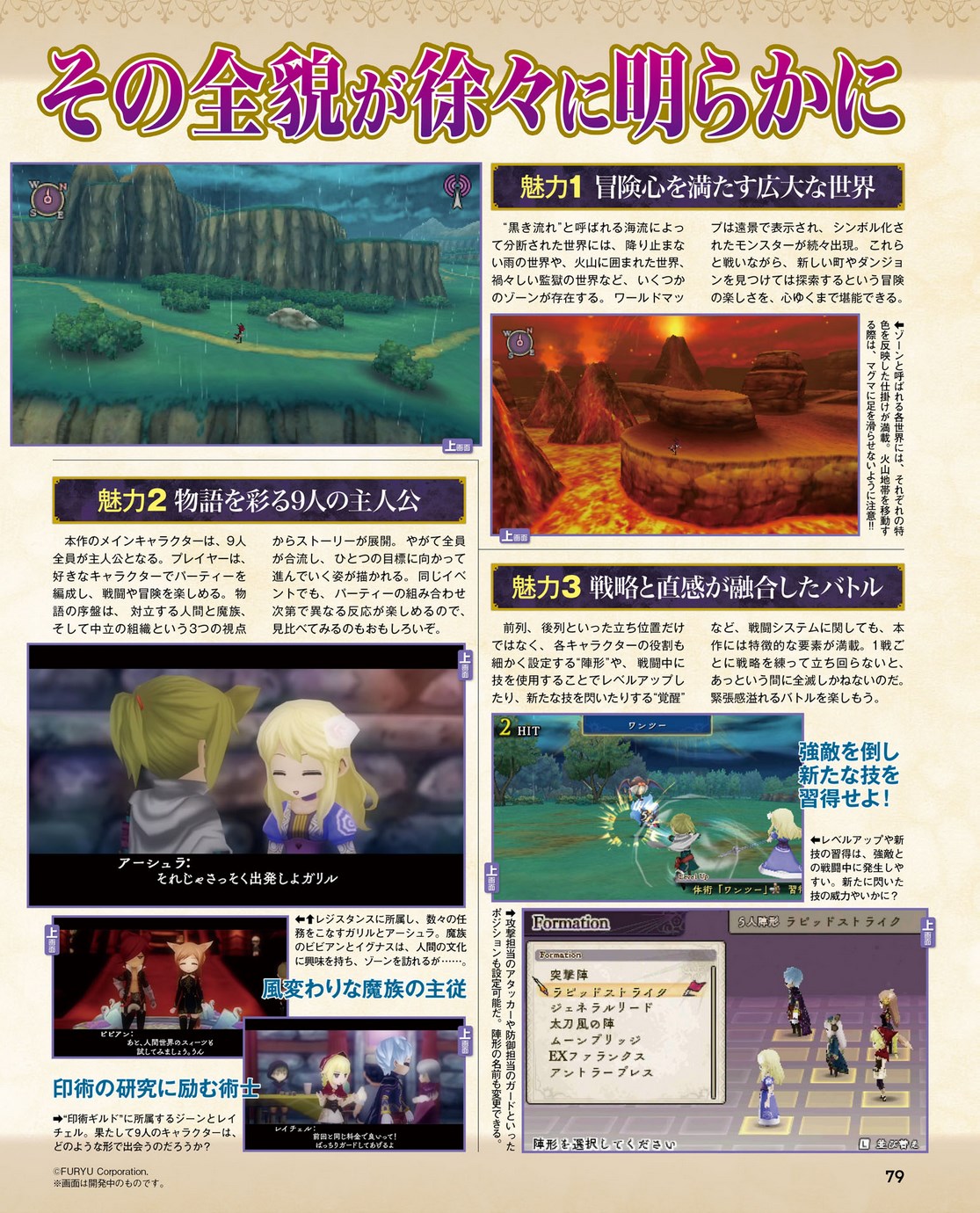 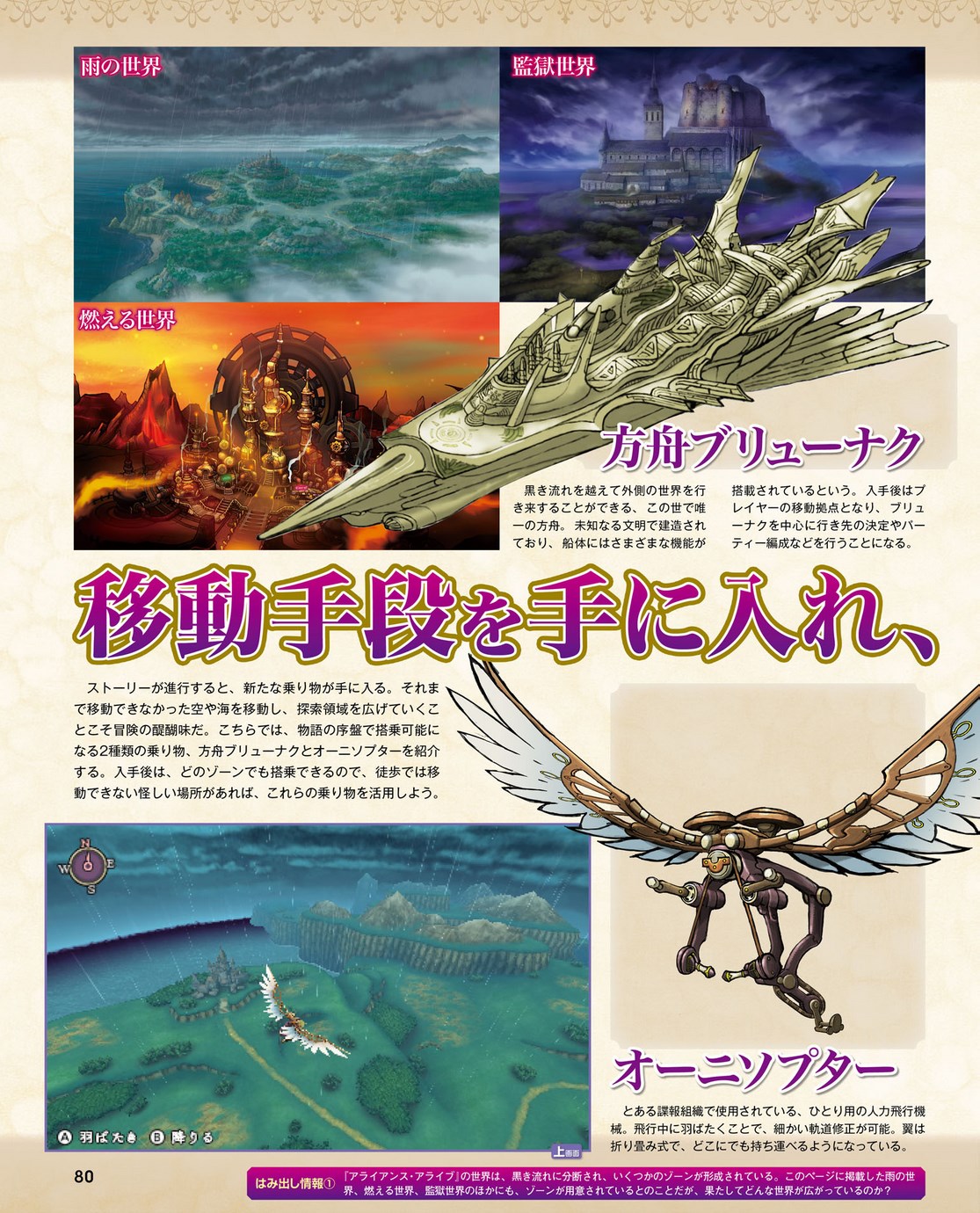 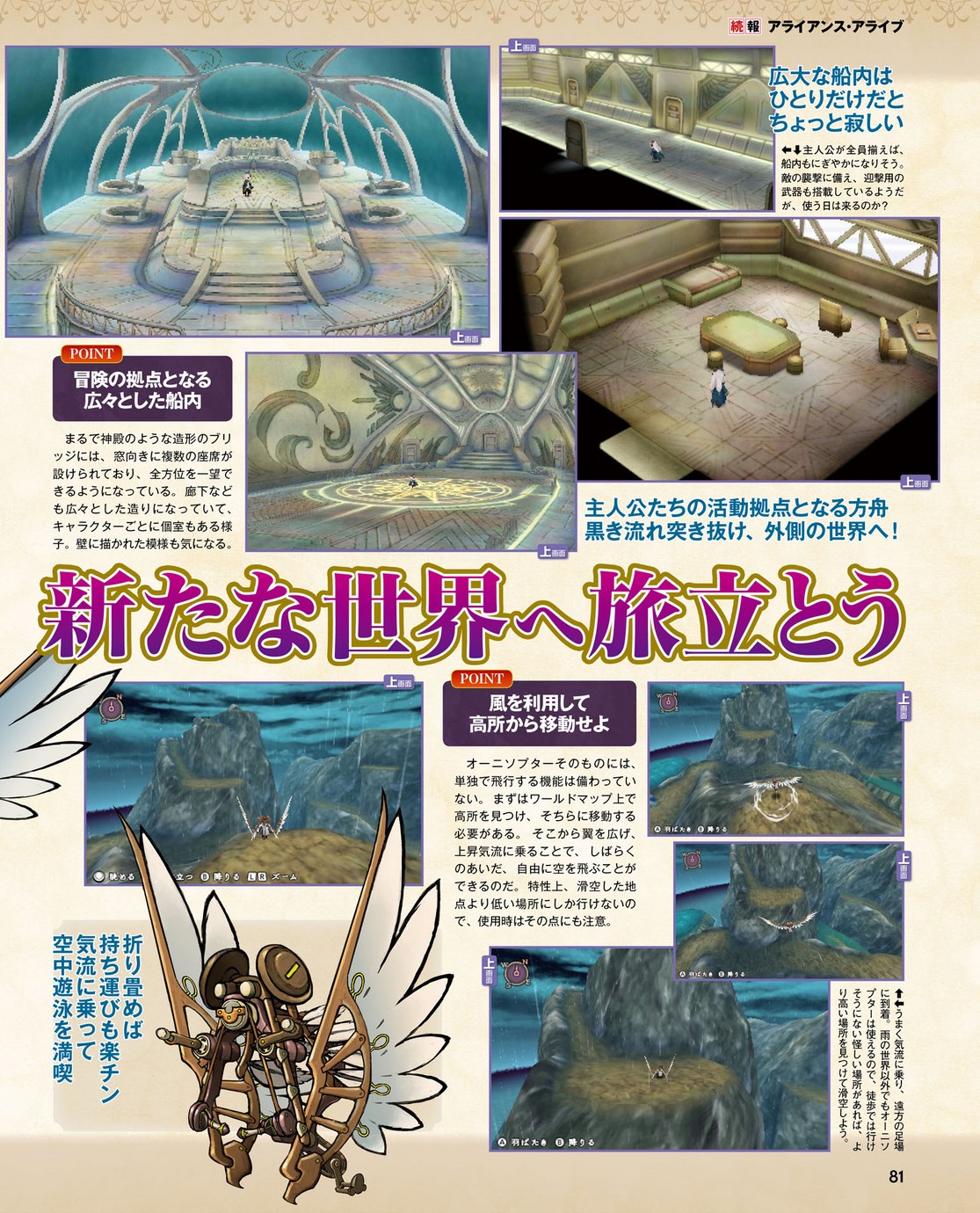 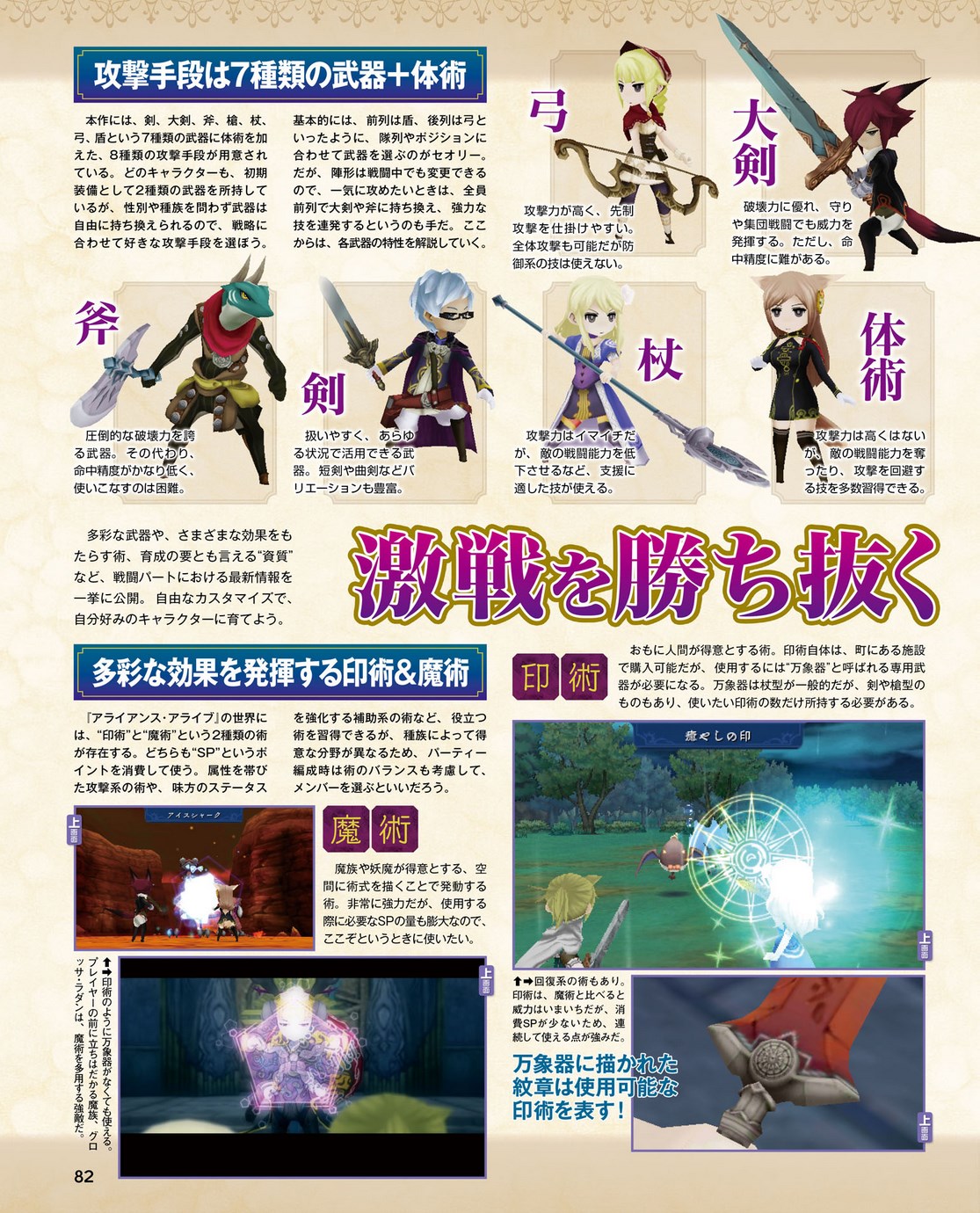 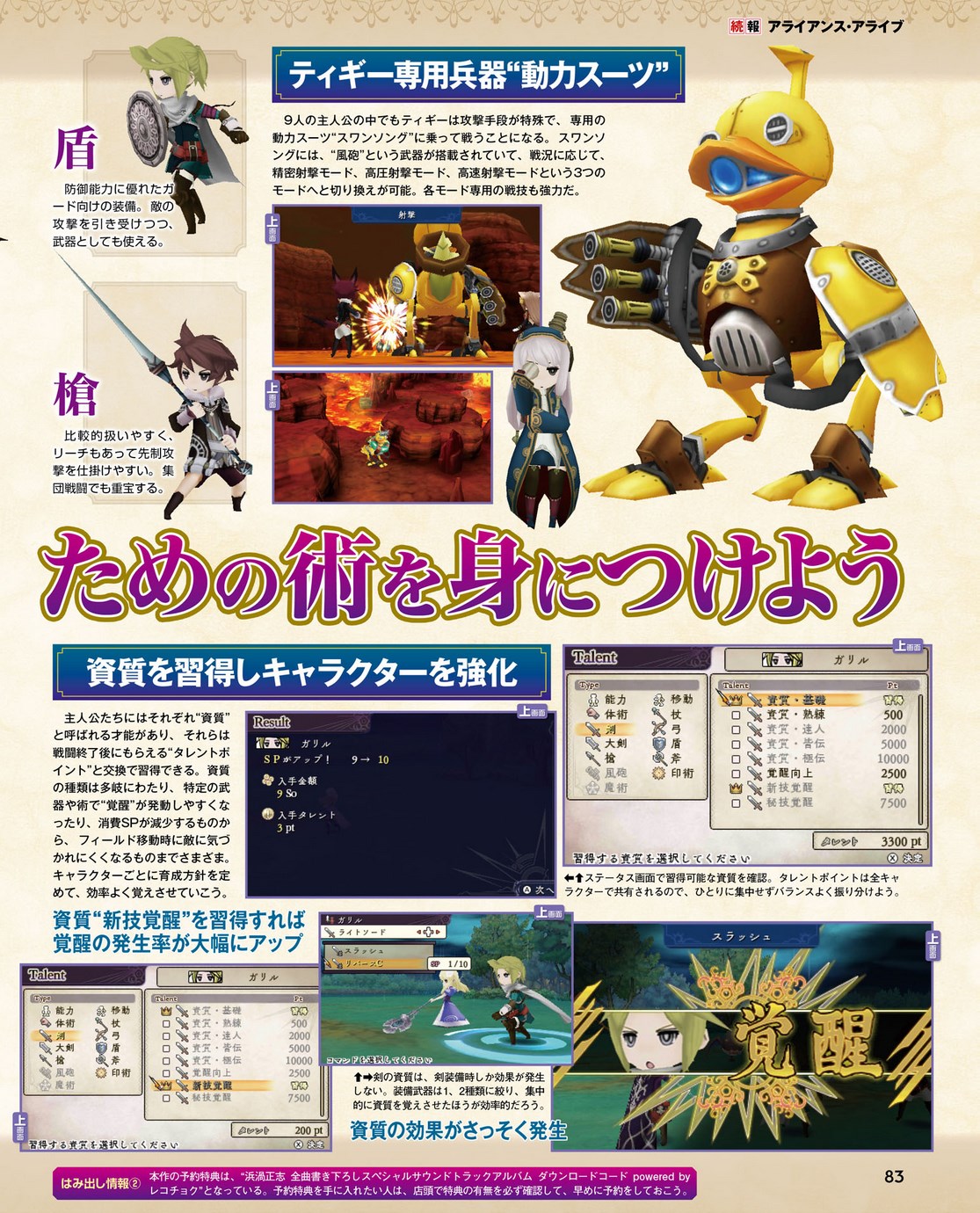