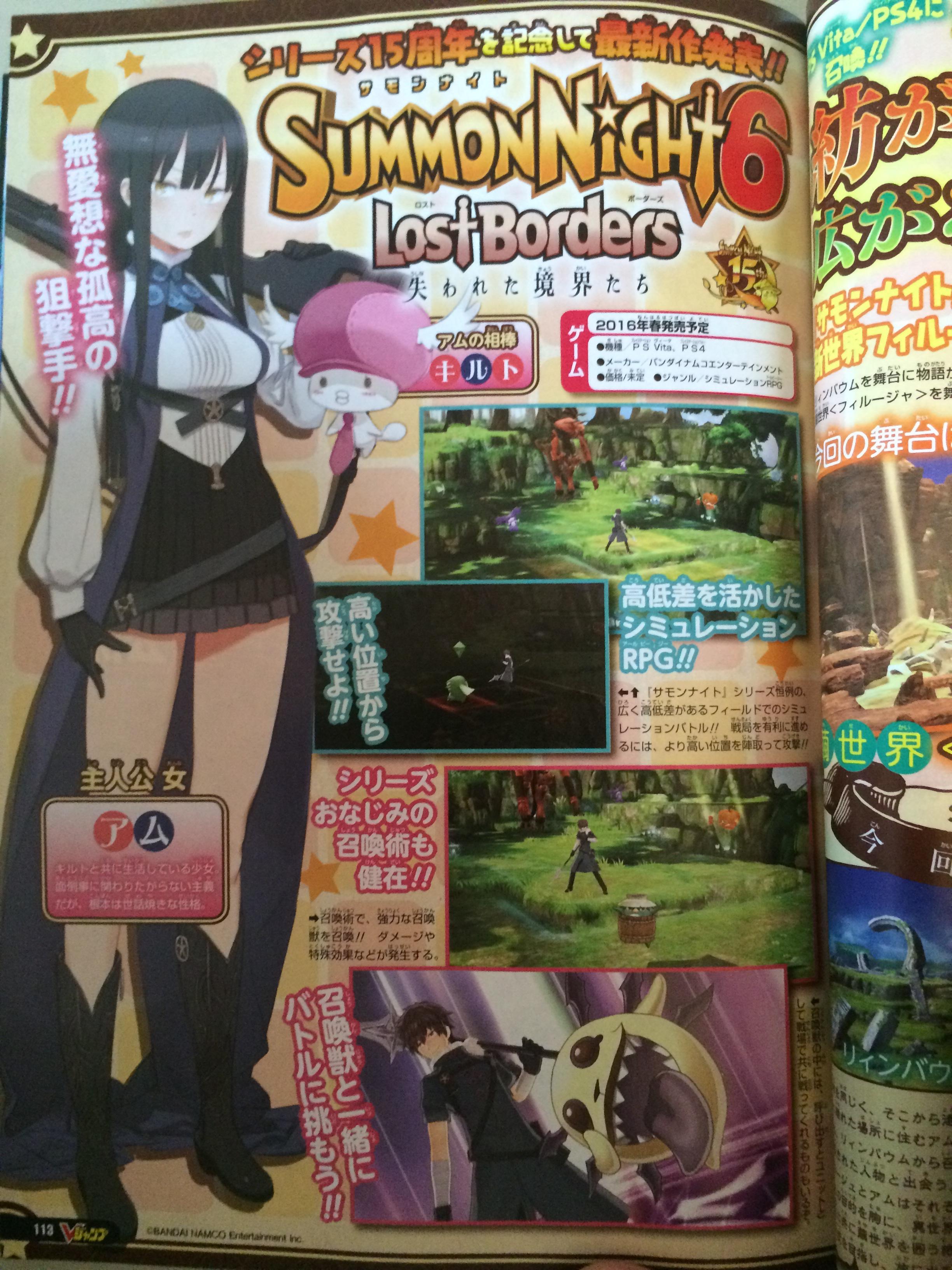 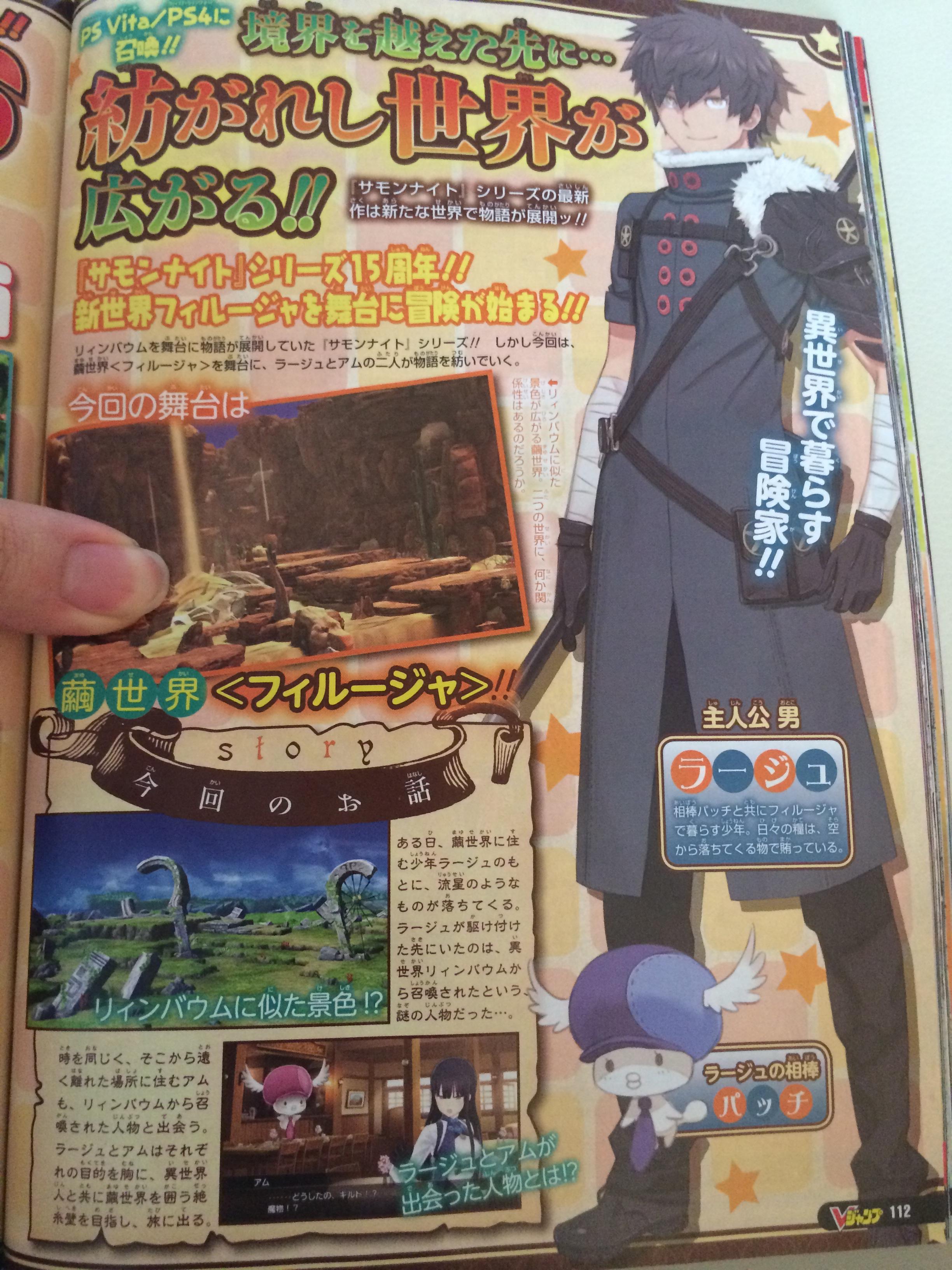 Players will take part in simulation battles set in the expansive and height-variegated fields that the Summon Night series has become known for. Using Summon Arts, players can call forth powerful summons that can deal big damage and trigger special effects.

One day, something like a meteor crashes into the cocoon world, near where a boy named Raj lives.

At the same time, Amu, who lives far away from there, also meets a mysterious person summoned from Lyndbaum.

Each with their own goals, Raj and Amu, together with the people of the other world, go on a journey and head for the wall surrounding the cocoon world. 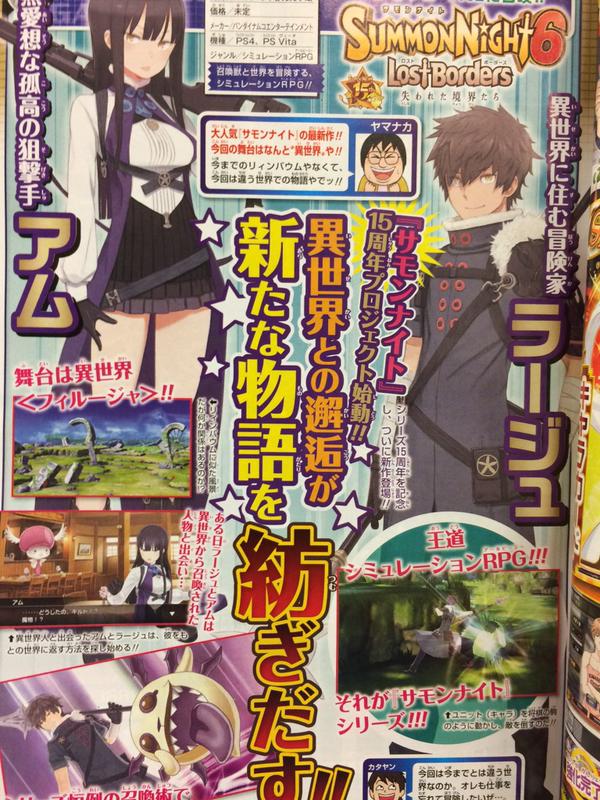 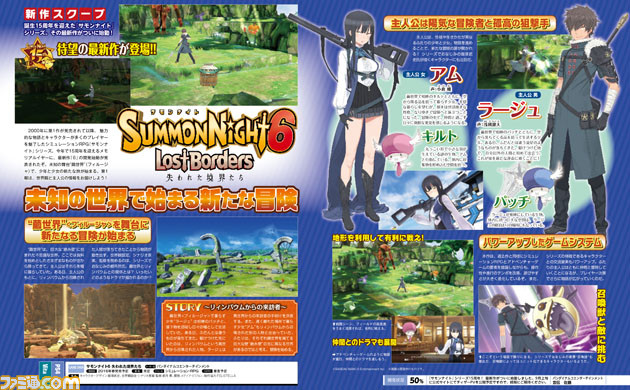 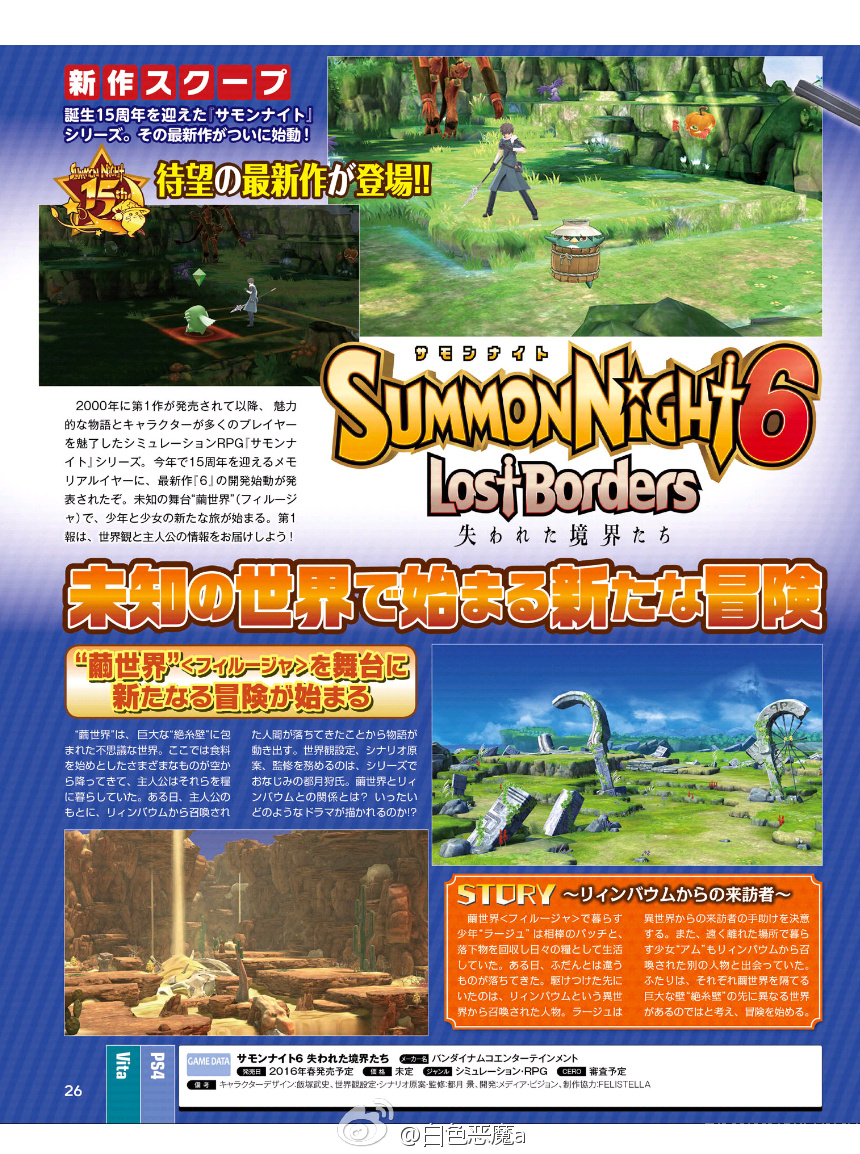 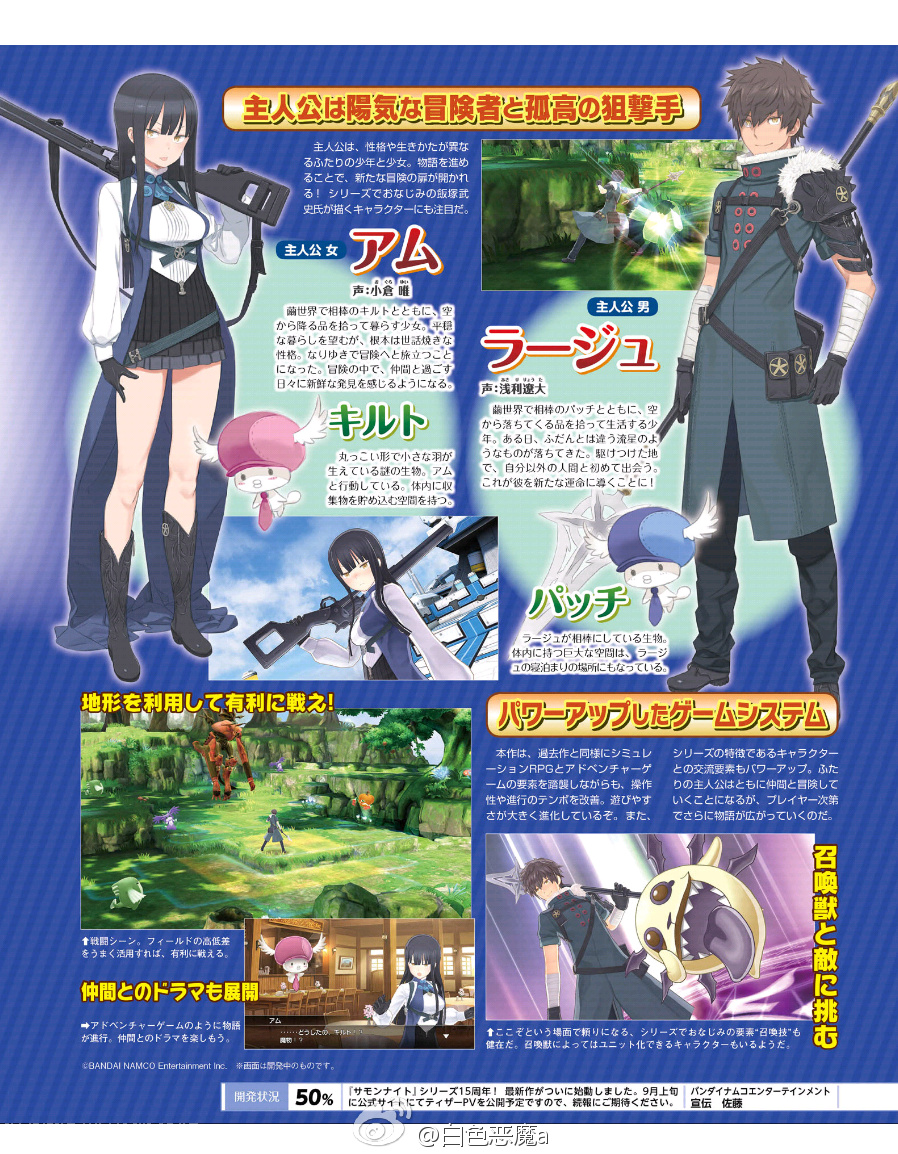 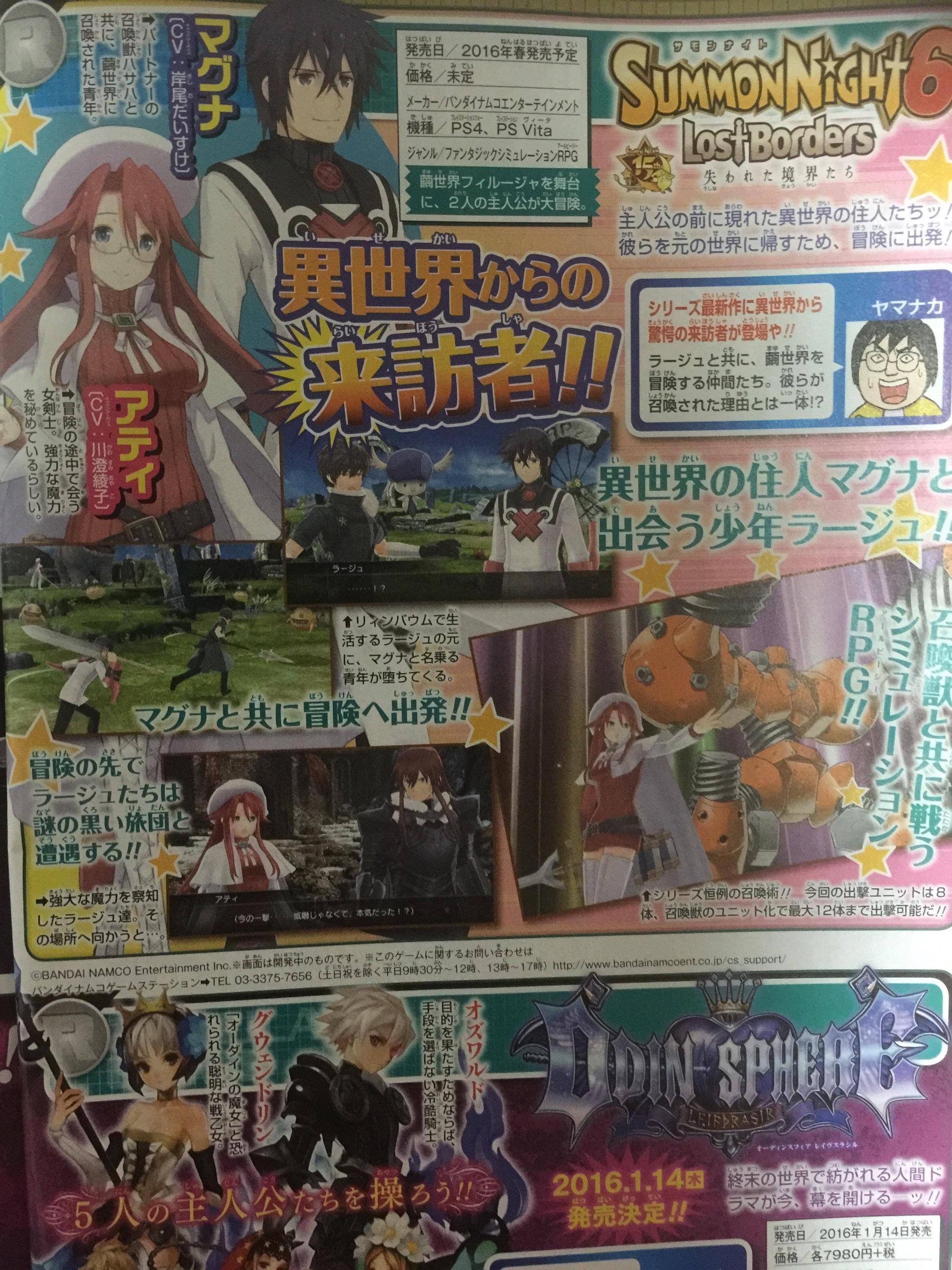 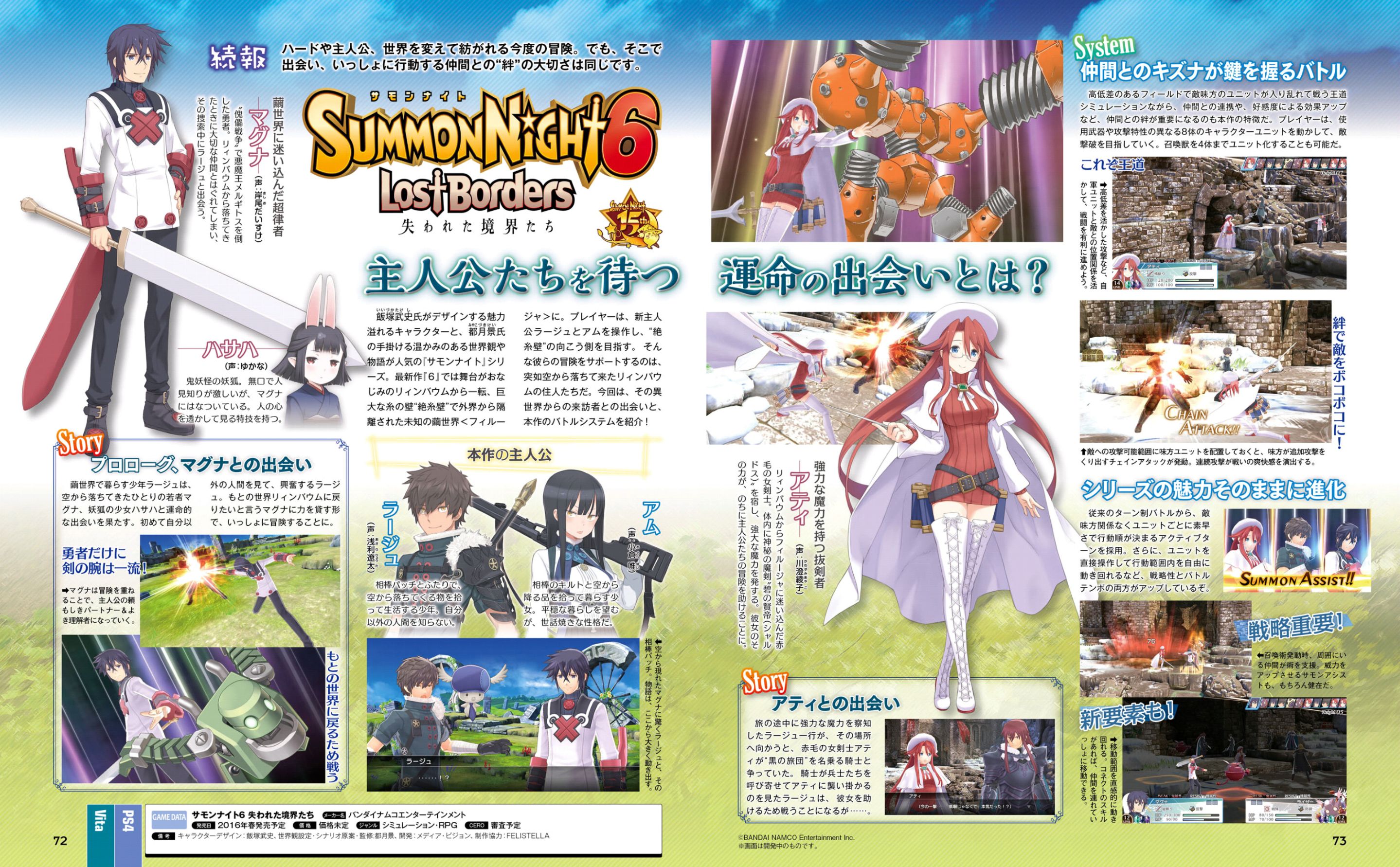 One day, a young man named Magna comes falling down from the sky into the cocoon world where a boy named Raj lives.

Magna comes from Lyndbaum, a world different from the cocoon world. He drops in suddenly with his guardian companion Hasaha, a kitsune girl.

Raj is somewhat excited to meet another human being outside of himself for the first time, but Magna, not knowing the situation, is confused.

Raj’s adventure begins as he sets out to help Magna and his friend return to their world.. A young man who fell into the cocoon world from a different world called Lyndbaum. He is a hero who once defeated the demon king Melgitos during the “Puppet War” in Lyndbaum. He is separated from an important friend when he falls to the cocoon world, and together with his guardian beast Hasaha, meets Raj during his search. He has an easygoing and somewhat leisurerly personality, and sets off with the good and understanding Raj. A kitsune from the yokai world. She is very quiet and shy, refers to Magna as “onii-chan,” and always keeps close to him. Using the gem she carries, she can see the true colors of a person’s heart. She specializes in black magic, but lost her abilities in a big way when she came to the cocoon world. During their journey, Raj and company sense a powerful magical power, and when they cautiously make their way towards that location, they end up in a quarrel against a red-headed female swordsman donned in armor. Surprisingly, this dreadful magic oozed out from within the red-headed woman. Her name is Aty. She harbors a mysterious magic sword called “Shartos” within her. When a knight suddenly appears out of no where and summons soldiers to launch an attack, Raj and company unite with Aty out of necessity to intercept it. When Raj and company sense a powerful magical power during their journey, they come across the red-headed female swordsman. She has also been wandering the cocoon world from Lyndbaum, looking for a way to return home. She ends up traveling with Raj, and with the help of her hidden power, helps destroy the barriers standing in their way. She worked as a tutor in Lyndbaum, so as a teacher and someone who cares about the children, offers advice to troubled youth. In Summon Night‘s basic battles, strategy is of the essence. Up to eight character units will be able to participate in battle. And because you can summon up to four additional characters, it’s possible to have a total of 12 characters on the field.

The weapons you can use vary depending on the character’s type. You’ll want to proceed into battle considering the position of both yourself and the enemy, the unit’s attack characteristics, and taking advantage of the field’s height difference and terrain.

The series’ familiar summoning skills, as well as “Summon Assists,” which strengthen the summoning skills of your surrounding allies, will return in Summon Night 6. There’s also a “Connect” skill that lets you take along a comrade within your range of movement.

Additionally, the magazine reveals that players will be able to have evening conversations with the protagonist they do not choose (the game features both male and female protagonists). There will also be sub-events where you can increase your favorability with characters, which are tied to status bonuses during battles.

One after the other, visitors from the world of Lyndbaum begin appearing in the cocoon world of Filujah.

Their encounter with Raj and Amu leads them on an adventure.

Why is such a thing happening? What is its purpose?

In order to solve the mystery that is the the very key to the cocoon world’s existence, you’ll become entangled in the expectations of various characters while continuing forward on your journey. After meeting Magna and Aty, and continuing on your journey, Patch suddenly begins to feel frightened. Hastily, a young man emitting ominous magic power suddenly appeared for everyone present to witness.

This young man’s name is Hayato. Magna is apparently an acquaintance of his, but the Hayato Magna knew was supposed to be a hero, a ‘Linker’ who would protect Lyndbaum in secret.

Demon Lord Hayato was overwhelming the group, but a young girl named Aya rushes to the rescue.

Aya is the next in line of the legendary Linkers, and as an Elgo agent was a heroine who protected the order of Lyndbaum.

It appears they’ve come here from different parallel worlds—summoners from Lyndbaum—each on a different time axis. Now, everyone begins to understand there are those that come from parallel worlds…

A young boy summoned from modern day Japan to Lyndbaum, whose was possessed by the Demon Lord. The Demon Lord moved the gate which led to modern day Japan in order to devour Hayato’s world, but was summoned to the cocoon world midway. When he arrived he was starving, and his magic power was greatly reduced. So the usually reserved Hayato begins to act selfishly and cause trouble. A young boy who is a confident, high ranking summoner. In order to save his friend Hayato, who was captured by the Demon Lord, he chases the Demon Lord, jumping into a gate to a different world, but is summoned to the cocoon world, where he loses most of his magic power. A young girl with a neat and fragile appearance, but who also has a fortitude to stick to her beliefs for what’s best. Unlike the others who were summoned from Lyndbaum, it seems she voluntarily came to this world. She gains courage doing daredevil things with a calm face. In a sense, she’s wicked. A polite summoner girl. She and Aya are best friends and share secrets with each other. Much of her magic power disappeared after coming to this world, and her summon arts and large-scale attacks have become unusable. Amu is a young girl living in the cocoon world. She was living quietly with her rare animal companion Quilt.

One day, Amu witnessed lights of unprecedented scale raining down one after the other.

Unable to control her curiosity, she goes to examine one at her own discretion, and comes upon Natsumi, a girl from the different world of Lyndbaum.

Having not come into contact with humans other than herself, Amu was awkward and didn’t know if it was okay to approach her.

Near Natsumi, another light fell. And where it fell, Natsumi’s friend Cassis was there.

The reunion was joyful, and Amu, seeing that these two people had a mutual and caring trust for each other, recalled a faint yearning, and a feeling that she wanted to change herself was born.

From there, Amu decides to go on a journey with Natsumi to help her find her friends… A girl summoned from modern day Japan to the different world of Lyndbaum. Just as she was beginning to get used to her daily life in a different world, she was summoned to the cocoon world. Unable to deal with the situational change, she is picked up by Amu, who finds her crying. In her bluntness, Natsumi tends to feel uneasy when receiving assistance. She was looking for her friend Cassis, from who she was separated. Her magic power lowered after she was summoned to this world. No longer able to fight like she normally would, she is rescued and reunited with Natsumi after being attacked by a stray summon. She joins her friend and takes on the role of the cheery and soothing mood maker. As Natsumi’s taster of poison, she’ll do anything she says obediently and sniff out any hidden dangers. The story progresses via adventure parts. Solve the world’s variety of occurring events together with your allies.

You can increase your likability with allies through sub-event conversations. With a higher likability, you can gain enhanced Summon Assist effects, an increased chance of co-op attacks, and other bonuses. Characters with high likability can be useful in various situations.