This year's 19th issue of Shueisha's Weekly Shonen Jump magazine is reporting on Monday that Bandai Namco Games' Tales of the World game series is arriving on the Nintendo 3DS in the form of a simulation role-playing game. Tales of the World: Reve Unitia will offer "a dream world linking the Tales of franchise together."

While the magazine does not directly state that this game is a port of the smartphone game Tales of the World: Tactics Union, it does feature the same world and characters.

The setting of Reve Unitia will be Revaria, the world that dreams made. Daigo Okumura designed two characters for the game: the timid, gentle-hearted Terun and the strong, big-brother-like Nahato. Asbel Lhant (voiced by Takahiro Sakurai) from Tales of Graces f and Lloyd Irving (Katsuyuki Konishi) from Tales of Symphonia will fight alongside each other in the game.

The main scenario of Reve Unitia will have full voicing of dialogue. The release date and price have not been announced yet. For as long as people have seen dreams in their sleep, there’s been a world that’s accumulated those dreams and taken shape from them. That world is known as Revaria. In it live beings known as the Lufres, who maintain balance in the world by purifying Vuur, the embodiment of people’s bad dreams and wavering hearts.

Things have started to change, recently, however; Vuur, which once had no physical form to call its own, has taken shape as a monster. The only ones who can face Vuur in that state are the Dream Guardians, a group of powerful Lufres. But without warning, every last Dream Guardian disappears without a trace.

The only Lufres remaining are young ones that still lack much strength. They set out to summon people from The Awakened World in the hopes that they can find ones with the power to fight Vuur.

The Tales characters who end up being recruited as a result lose their memories of their respective worlds. Nevertheless, their core beliefs remain as intact as ever and so they set out to take down a threat that poses danger to every world, not just Revaria.

With the Dream Guardians nowhere to be seen as Vuur grows more and more powerful, the young Lufres, otherwise known as Wako in their world, were left behind live in fear. Taking matters into their own hands, they use what little power they have to try and summon Awakened Ones, but it ends in failure as their targets are spread out all over the world of Revaria, rather than just with them in their town.

One young Wako, Terun, leaves the town in order to try and find these Awakened Ones in spite of fear of Vuur. While these fears are realized when Vuur tries to attack him, he’s saved in the nick of time by two of the ones he’s looking for, Asbel and Lloyd. Working together with the pair, Terun and the others continue to gather more and more people who were summoned to Revalia as the work on undoing the danger that besieges the world.

Around the same time that Terun meets up with Asbel and Lloyd, Nahato himself manages to meet up two more Tales characters summoned to Revalia, Yuri and Jade. Worried about the fate of the Tales worlds in addition to Revalia, Nahato and company take up arms and fight. Although his objectives are the same as Terun’s, his story otherwise unfolds from a different perspective altogether.

Terun
“Please, let met go with you all! I can do more than just project you all!”

The youngest member of the Lufres, what Terun lacks in confidence and strength he makes up for with sheer niceness. His dealings with the Awakened Ones result in him awakening to a strong resolve. While Terun normally resembles something akin the Tales series’ previous mascot characters, in battle, he takes on the form of a human and fights alongside the other characters.

Nahato
“Then that makes two of us. I have something to protect as well. That’s all.”

Nahato is the strongest Dream Guardian among the Lufres. He’s something of a parent or sibling to Terun as the one who looks after him. Nahato uses the power of Dream Silk to take on Vuur and like Terun has two different forms he uses depending on the situation and stands at 5’8” (173 cm.) when he’s in his fighting form.

Asbel Lhant (Tales of Graces)
“We can’t turn our backs on this problem, not when it affects our own worlds as well.”

Asbel is a young swordsman who ends up helping to save Terun in a forest. Polite and serious, he’s always good about looking after others.

Lloyd Irving (Tales of Symphonia)
“What are you saying? Of course we’re all friends here!”

Lloyd is a swordsman who wields two blades and helps Asbel save Terun. While he can get fired up, Lloyd is fundamentally a nice person at heart.

Natalia L.K. Lanvaldear (Tales of the Abyss)
“It’s only natural that I’d help someone who’s hurt.”

While she comes from regal stock, Natalia is an archer who’s more than willing to take up her bow to ensure justice is served.

Yuri Lowell (Tales of Vesperia)
“I’m not one to just stand and gawk while people are out their risking their neck. I’m going to go lend them a hand.”

Yuri is deeply cynical of the world around him, choosing to operate under his own principles as a swordsman. His sheer speed will have players’ heads spinning if they’re not careful.

Jade Curtis (Tales of the Abyss)
“Heh, you kids are just full of energy, aren’t you? Fine, you win. Shall I tag along then?”

Jade is a mysterious man who’s highly proficient in both Artes and fighting with a spear. He tends to wear a smile, but it’s hard to read what emotions really lie underneath it.

Meredy (Tales of Eternia)
“I’m going, too! I want to help everyone else out!”

Although she’s naïve and friendly on the outside, Meredy is a girl with a strong willpower about her. She mainly uses strong attack Artes, but is also fully capable of acting as a healer as well. 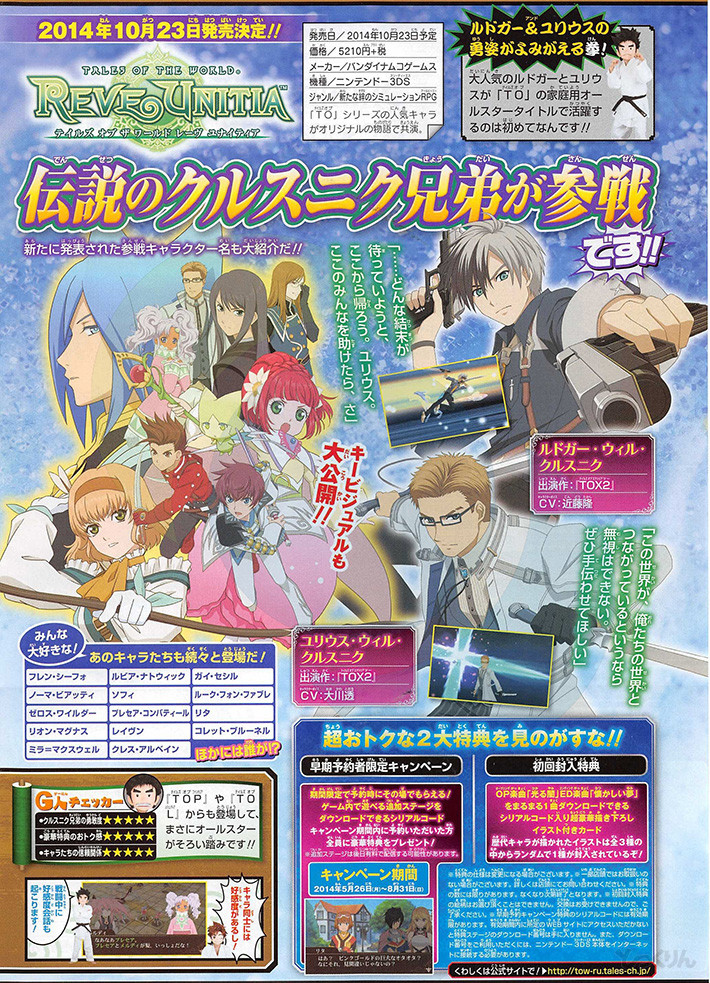 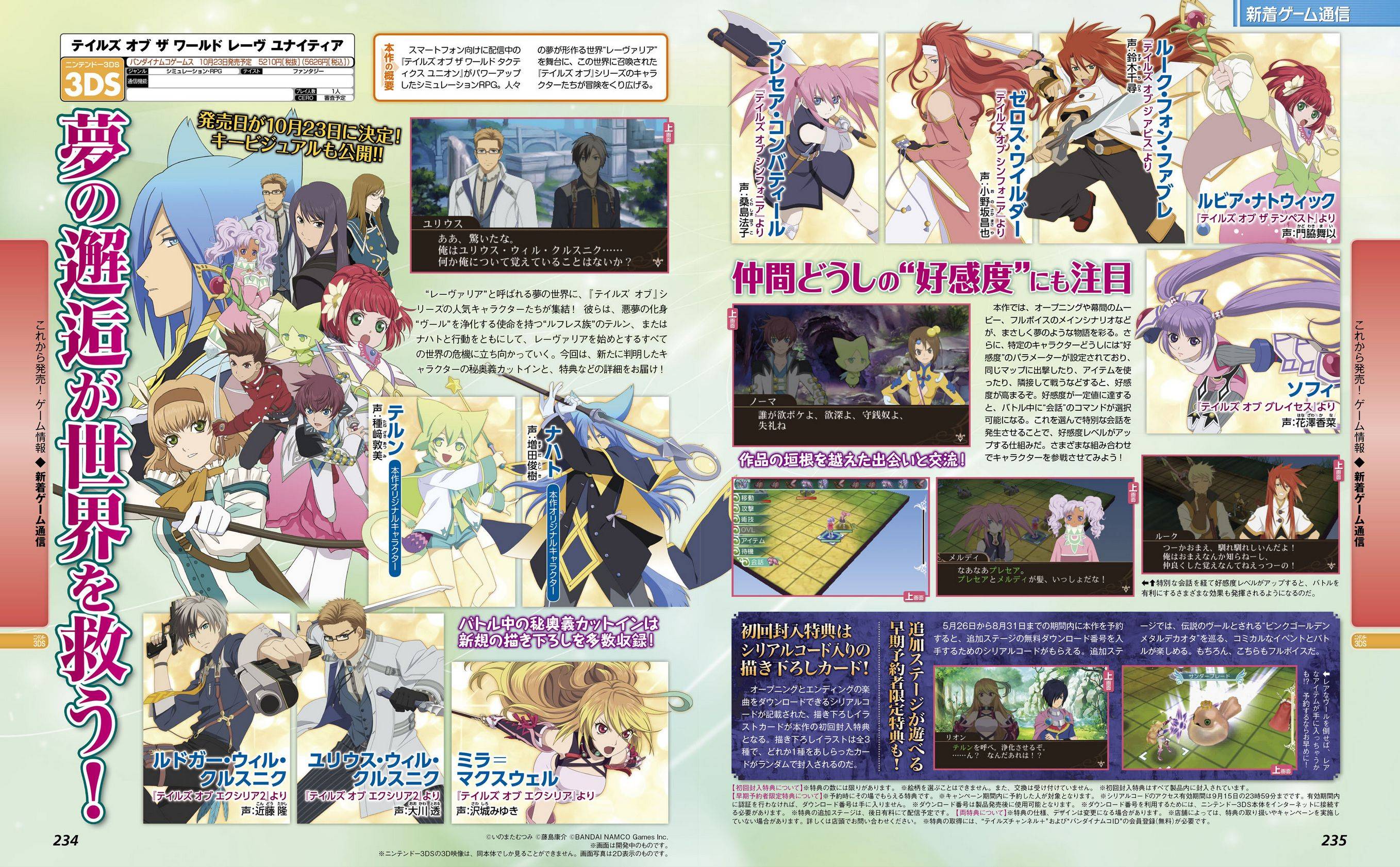