Nokia introduces Lumia 1520 and Lumia 1320, the largest Windows Phones yet

Espoo's latest pushes the size limits of a phone 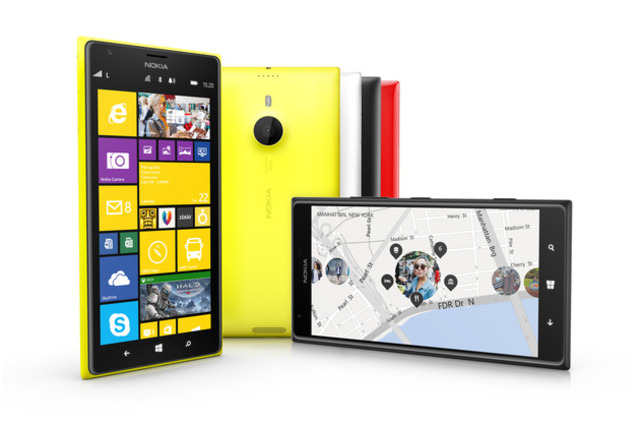 Smartphones, especially Android and Windows Phone devices, have been growing rapidly in size over the past few years, from devices with mere 4-inch displays to those with screens almost six inches in size. Today Nokia is announcing its largest devices yet. The new Lumia 1520 (and its low-end counterpart, the Lumia 1320) features a massive 6-inch display, making it the largest Windows Phone ever released. The 1520 is also the first Windows Phone with a 1080p screen and Qualcomm's Snapdragon 800 processor.

The 1520 retains Nokia's familiar design language — it's a single piece polycarbonate design that looks like a bigger version of the Lumia 720 — and build quality. But when you have a 6-inch display, there's no getting around having a big phone, and the 1520 is downright massive: it's 3.36-inches wide, 6.4-inches tall, and weighs 7.37 ounces, despite being only 0.34 inches thick. You can hold it with one hand, but for the most part, this is a two-handed device. The new LCD display is bright and vibrant, and as is the case with most Nokias, it has great viewing angles and deep blacks.

Windows Phone 8 has never performed poorly, even on low-end hardware, but the 1520's quad-core, 2.26GHz processor and 2GB of RAM let it scream. Nokia notes that while most users won't notice the added horsepower in basic tasks, it is beneficial when editing video or playing intensive games. We've seen this chip in the LG G2 and Samsung Galaxy Note 3 already, both running Android, and it has proven to be quite the performer. The 1520 also has a 3,400mAh battery, built-in wireless charging, and support for LTE networks.

The Lumia 1520 is the biggest Windows Phone yet

Despite having a large, almost tablet-sized screen, the 1520 doesn't have a stylus or other form of input apart from the standard touchscreen. When asked about the lack of a stylus, Nokia said that it didn't see a need for it for the use cases for this phone, and that it was not worth the tradeoff in size required to accommodate the stylus in the phone's body. Nokia is introducing a flip cover for the 1520 that turns into a stand for the phone, much like Apple's Smart Cover for the iPad. It does not turn the phone's display on when you open it, however.

For the camera, Nokia is using a new, lower-resolution version of its 41-megapixel PureView sensor with 20 megapixels. It has optical image stabilization and the PureView capabilities of zooming in after you take a picture without a loss of quality. The PureView zoom level is limited to 2x on the 1520, as opposed to the 3x zoom on the 41-megapixel Lumia 1020. Nokia also revealed that the long awaited official Instagram app will be available for Windows Phone in the coming weeks.

The Lumia 1320 is another big smartphone from Nokia, but it's a lower-end device for an entry level buyer. It drops the 1080p display for a 720p panel, steps down to a dual-core Snapdragon 400 processor with 1GB of RAM, and has a standard 5-megapixel camera.

These new devices straddle an odd line for Microsoft's mobile platforms — they are the biggest devices to run Windows Phone 8, but they are bumping up against the smallest devices that run Windows RT or Windows 8.1. It's not clear exactly which platform is best suited for these in-between sizes, and we don't yet know how third-party Windows Phone apps will scale at the larger screen sizes. Apple and Google have taken a different approach than Microsoft when it comes to smartphone and tablet operating systems, offering a clear distinction between what is meant for a laptop or desktop and what is meant for a tablet or smartphone. Microsoft and Nokia will need to clearly define the advantages offered by the 1520 in order to avoid confusion among their device lineups and among consumers trying to find the best device for their needs.

Aaron Souppouris contributed to this report.