By Tom Warren on 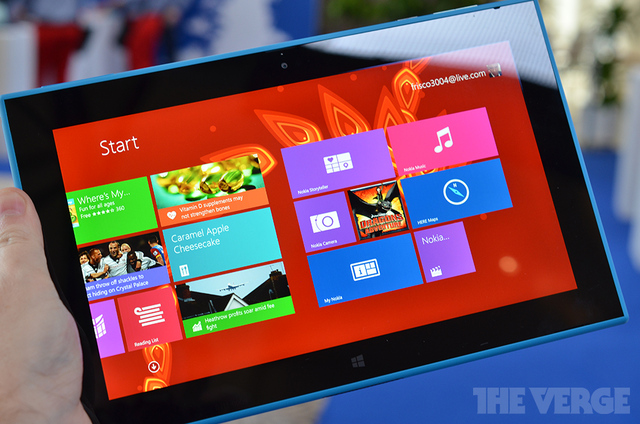 The moment has finally come, Nokia’s first Windows tablet. While its been rumored for what feels like years, Nokia’s Lumia 2520 is the Finnish smartphone maker’s answer to a Lumia-style tablet. It’s everything you’d expect from Nokia, and it looks just like a much bigger version of a Lumia Windows Phone. Microsoft might be buying Nokia’s device business, but for the next few months they’re going to be battling it out as competitors for Windows-based tablet market share. At Nokia World in Abu Dhabi today I got a chance to compare Nokia’s Lumia 2520 directly with Microsoft’s Surface 2 tablet and find out whether a Nokia built tablet can take on Apple’s iPad and the rest of the tablet competition.

Nokia has opted for a 10.1-inch display on its Lumia 2520 with a body that’s styled just like a Lumia Windows Phone. It looks beautiful in red, white, cyan, and black. The easiest way to describe this device is just to imagine a rounded Lumia like the 720 and then blow it up to 10-inches to get a Lumia 2520. It really takes Nokia’s design language and places it almost perfectly into a tablet form factor. The 1920 x 1080 display is perhaps one of the best I’ve seen on a tablet. Viewing angles are great and the brightness is equally impressive. Color reproduction is incredibly accurate, and it’s clear Nokia has really aimed high with the display on its first tablet.

One of the worries that comes with a Windows RT device is performance. While Microsoft’s initial attempt with Surface RT was plagued with app performance issues, the Surface 2 improved greatly and Nokia’s tablet is equally powerful. Inside there’s a 2.2GHz Quad-core Snapdragon 800 processor, and Windows RT 8.1 runs great. It’s responsive and multitasking with apps seems just as good as the Surface 2. Because this is Windows RT you also get access to the desktop Office apps as part of this device, and that’s where Nokia’s keyboard is useful.

While the Surface 2 has its own Touch and Type Covers, Nokia has opted for a Power Keyboard. It adds a Surface-like keyboard and trackpad, alongside two USB ports and a boost of five hours to the battery life. Nokia says the Lumia 2520 should get 11 hours by itself, so it’s possible this device will reach 16 hours in total with the cover attached.

We’ll be back with more hand-on impressions shortly

"While the Surface 2 has its own Touch and Type Covers, Nokia has opted for a Power Keyboard. It adds a Surface-like keyboard and trackpad, alongside two USB ports and a boost of five hours to the battery life."