Ubisoft has revealed the first details on Child of Light, a small downloadable project currently in development at Ubisoft Montreal.

Plourde discussed the title at GDC Europe this morning, saying that he created Child of Light as a "counter-point" to the "masculine" Far Cry 3, and that he collected a range of art and music for inspiration on the project, citing Studio Ghibli artist Hayao Miyazaki and Yoshitaka Amano as being "really inspiring".

Illustrations from Disney's Snow White and early 20th century children's books are also said to have inspired the project.

Plourde says that he sees Child of Light as "a playable poem", describing it as Limbo meets Final Fantasy VI.

Platforms have yet to be confirmed, but Plourde believes the game is a "potential next-gen IP". The title will not launch on mobile platforms.

Child of Light releases in winter 2013.

Child of Light will be built in the Ubi Art Framework, Ubisoft's engine which facilitates game development for artists, which Rayman Origins was developed in. Using that engine, Plourde explained, Child of Light's creators are able to bring their dreamy, fairly tale-inspired concept art to life in a very direct manner.

After working on several AAA titles in a row at Ubisoft, Plourde wanted to make "the antithesis" of a AAA game, he explained. He wanted to make something soft, small and "feminine," not driven by easily-sellable violence or testosterone. After traveling the world, visiting museums and building a library of artistic influences, he settled on the aesthetic he wanted to recreate: The "Golden Age of Illustration," when children's books began to feature gorgeous, intricate art from painters like Arthur Rackham and Edmund Dulac.

The best genre to match that aesthetic, he explained, was found in the operatic nature of classic JRPGs from Square. Using the Ubi Art Framework, though, his team will be able to realize a world that looks closer to the concept art for those JRPGs rather than their pixelated in-game realization. Plourde pointed out a frame of concept art from Final Fantasy 6 artist Yoshitaka Amano; using Ubi Art, he said, he can make a JRPG that looks more like that artwork, and less like a traditional game.

Other details about the title were scarce; Plourde promised that the game would be more properly, fully revealed by Ubisoft soon. In terms of gameplay, Plourde described the game as a combination between Limbo and Final Fantasy 6, with side-scrolling gameplay and turn-based battles. Like many fairy tales, Child of Light will tell a coming-of-age tale for a young woman; another thematic match with JRPGs, which can represent that kind of growth through leveling mechanics.

It will also be a downloadable title, which Plourde explained was one of his primary goals before development on the game actually started.

"With digital, there's no shelf space to fight over, and that is the crux of the battle in publishing," Plourde said.

It's a battle he wasn't interested in participating in with this project. He wanted to avoid discussions of profitability, marketing and pre-orders when conceptualizing the title.

"At that level it doesn't even matter if the game is good or not," Plourde said. "I just didn't want that thing of having to deal with Best Buy anymore. They're fine people, I think they're great, but dealing straight with the consumer, dealing directly with them, then it's entirely up to them to decide."

By avoiding that cycle, Plourde said, he was able to make a game without the traditional amount of buzzwords. The game will not be released on mobile, he said, and it won't be free-to-play.

The game is going to be one of the smallest projects to come from the monolithic Ubisoft — Plourde said one-third of the development team is female, and later said that 12 women are working on the game, assumedly numbering the development team at around 36. It's been a positive experience, making a small project in a AAA studio, he explained; he receives more support than the traditional indie developer receives. However, he said that dealing with the "big game culture" at Ubisoft, and the traditional "development gates" that result, has led to occasional friction.

That friction hasn't been too much of an impediment, he said. In fact, he's got a second smaller project in development at Ubisoft; something even more experimental than Child of Light.

The first concept art from Child of Light is posted above; interestingly enough, Plourde also described the art as in-game, a fact made possible by the Ubi Art Framework. 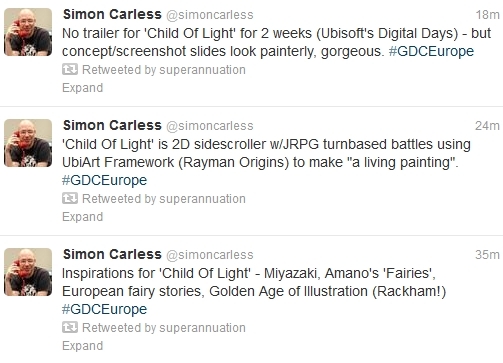