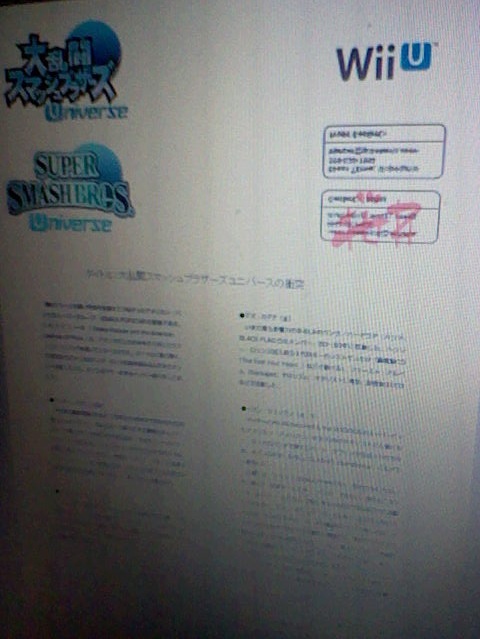 Some of the stuff has been translated. (Translation from Zelda Informer).

Random points of interest from the bulleted text:

> (?) to get some ideas off my chest. Hoping that they will be taken into consideration. The writer suggests that some of his ideas made there way into Brawl. One of which was the sticker stat increasing system found in the SSE.
>Neku from TWEWY was mentioned in one of the later paragraphs, but it was a reference to gameplay elements from TWEWY rather than talking about Neku himeself. The writer thought that something like the badges in TWEWY could be used for a character, although he didn't specify who.
> remove tripping. It (?) received well.
> 3 party support worked out. (?) more in the next installment.
> Mario franchise has experienced tremendous growth since last installment and should reflect that.
>Metroid: Other M expanded on Samus and Ridley. Something about how Samus doesn't need to be slow anymore. Other M and Zero Mission show her as a fast warrior and she needs to be represented as such in next installment.
> (?) characters from Sega
> Konami and Square Enix are mentioned in the lower bulleted parts, but I can't make out any context.
>He feels that the Mother and F-zero franchises are finished and he has no ideas for them.