Separately, Jump has confirmed a February 23 release date for the game. Tales fans can select from a standard ¥6,280 version and a ¥9,980 limited edition which includes a table calendar, a premium novel, a three disc drama CD set, an original book cover and other goodies.

The limited edition includes a six chapter novel with new stories for Twin Brave, a set of three drama CDs spanning over 120 minutes, a book cover, a set of frames from the opening anime, and a tabletop calendar featuring the "best partners" from each of the 15 Tales games that are featured in Twin Brave. All this for ¥9,980. 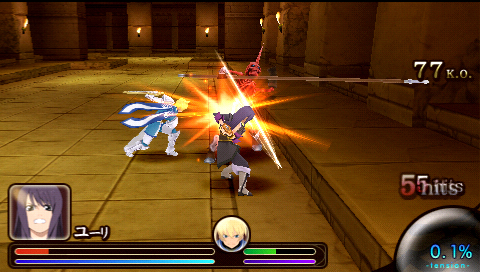 Twin Brave is an action-focused spinoff for PSP. Players select a character from past Tales titles and fight in pairs.

The game has characters from 15 Tales series, each with their very own scenario. Confirmed characters include Jude and Milla from the recent Tales of Xillia, Yuri and Fren from Tales of Vesperia, and Llyod and Zelos from Tales of Symphonia.

(We erroneously reported yesterday that the game is for Vita. It's actually for PSP.)

*me molto brava a conquistare i ragazzi*