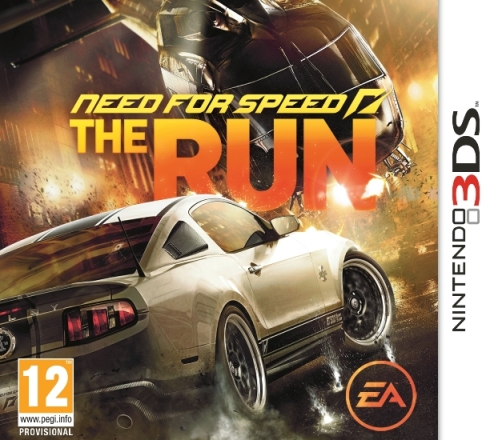 Get'em!
Get'em!
Yes, the 3DS Need for Speed: The Run is all about racing from San Francisco to New York in an illegal competition while knocking your opponents off the road. (Takedowns rule, of course.) The story plays out in 2D comic book cutscenes, and the action is the traditional racing perspectives.

I played through two of the game's nine different race types, and I was impressed by how sharp Need for Speed: The Run looks -- it's not watered down and does the sleek cars justice. On top of that, it handles really well. Gas and brake are up on the shoulder buttons with face buttons controlling drift and boost. Like other racing games, you fill the boost meter by driving into oncoming traffic and pulling off crazy stunts.

I've played a handful of your Burnouts and console Need for Speeds, and this 3DS version fits perfectly into those games' ranks -- which is impressive for a racing game on a handheld. I even enjoyed 3DS mini-challenges like having to trace a U-turn logo on the touch screen to keep from dying and swerving to avoid some gun-toting maniac/helicopter chasing me.

There are 26 stages spread out over five acts in the 3DS rendition of Need for Speed: The Run. When you beat all of that, you unlock 40 challenges that act as an asynchronous Autolog with your friends. You'll set a high score, and your friends will see it on their systems the next time they jump into the game. You can even StreetPass race times to make sure you're the best around.

You can't get'em.
You can't get'em.
While I'm totally cool with being able to run through the streets or whatever in Need for the Speed: The Run on consoles, I'm happy it's not here on the 3DS. This version looks like it's all about racing, crashes and Takedowns, and that's fine by me.