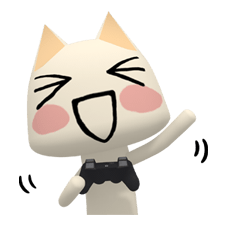 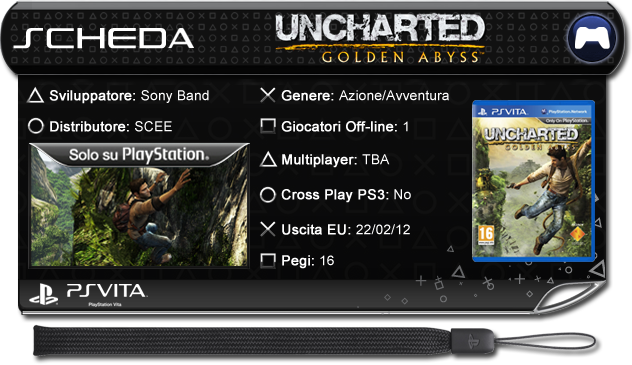 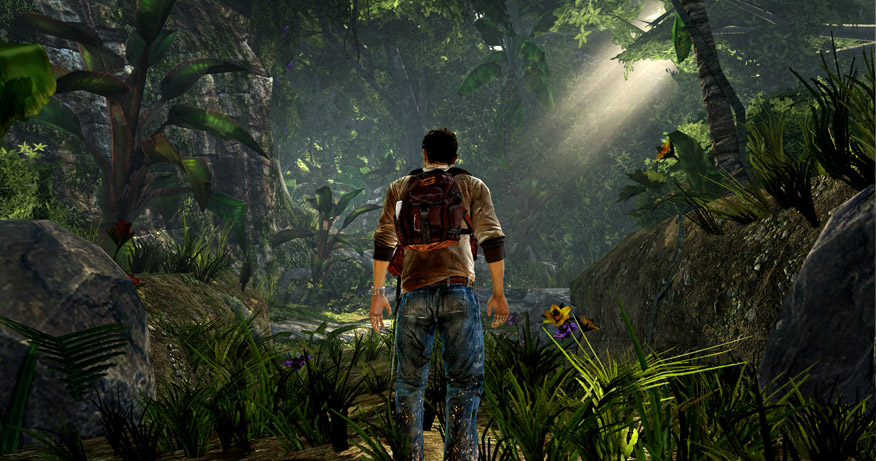 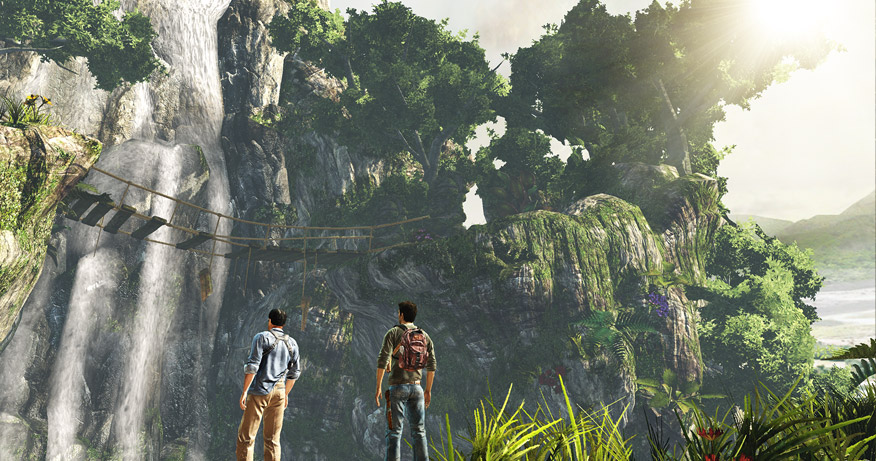 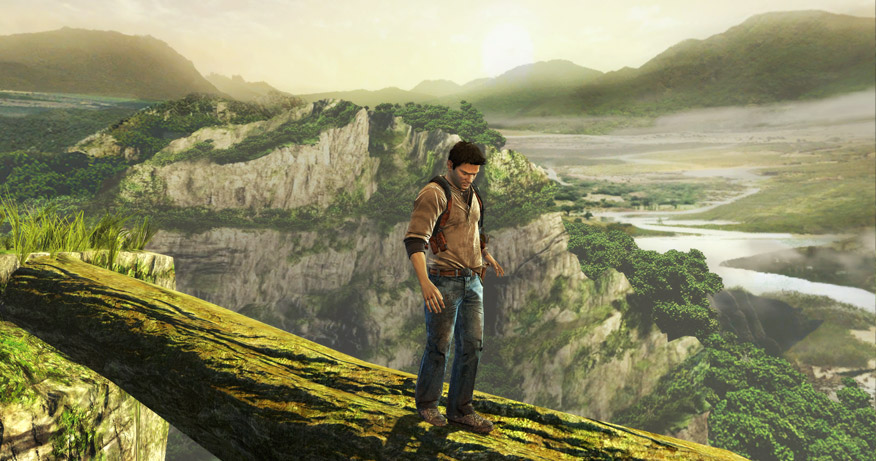 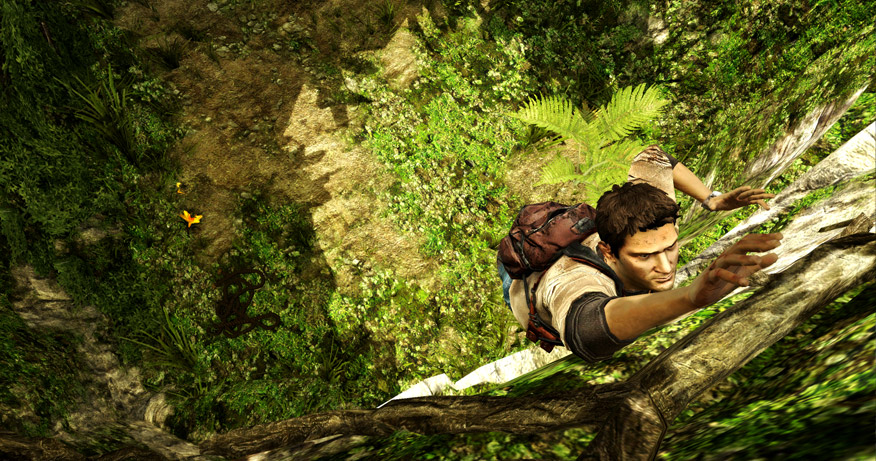 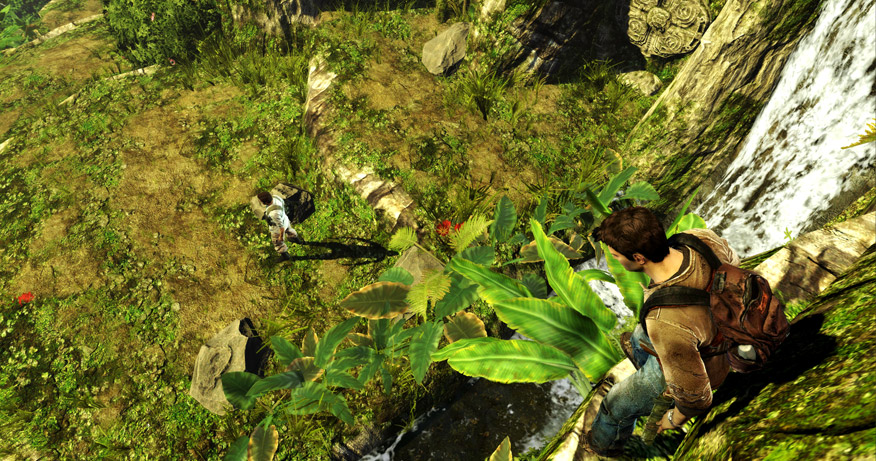 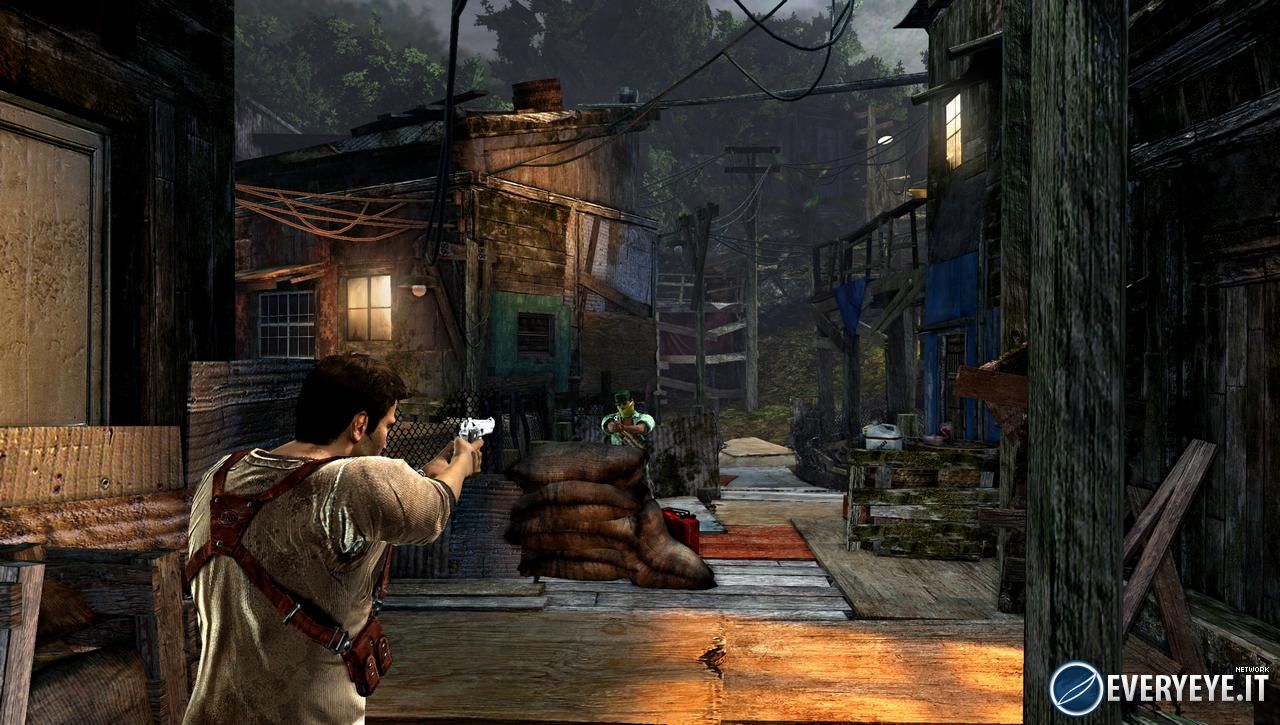 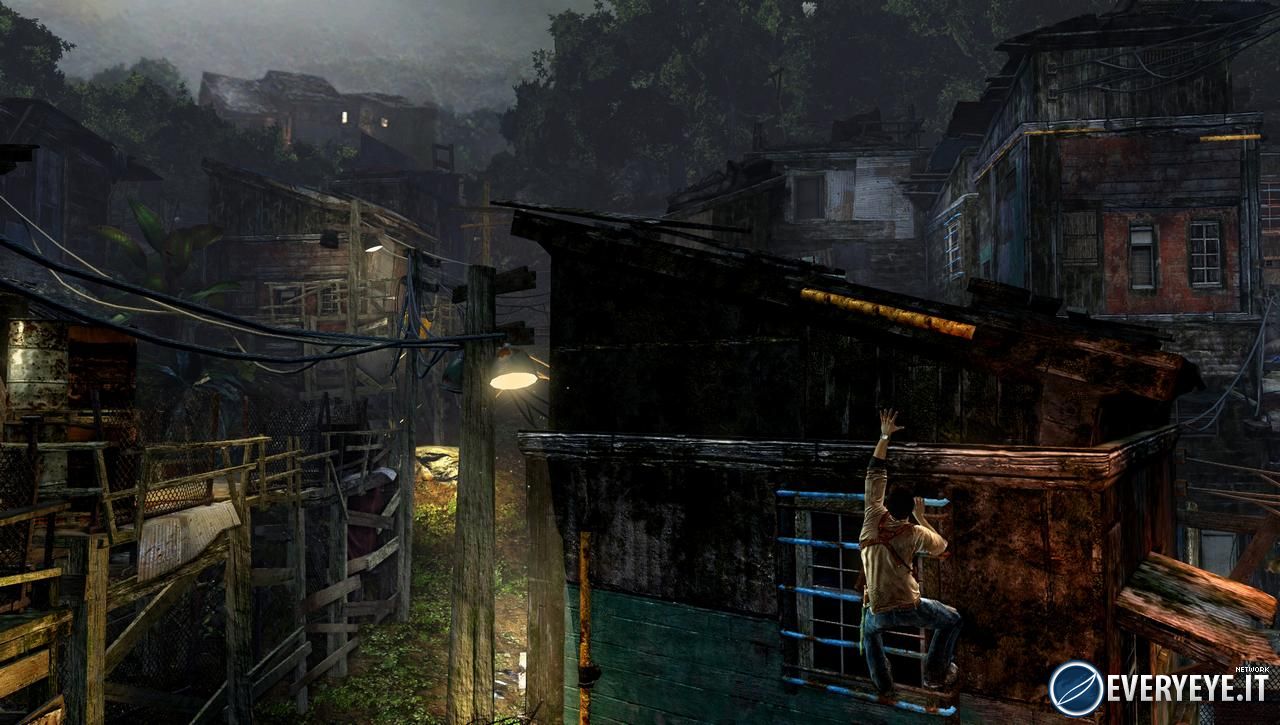 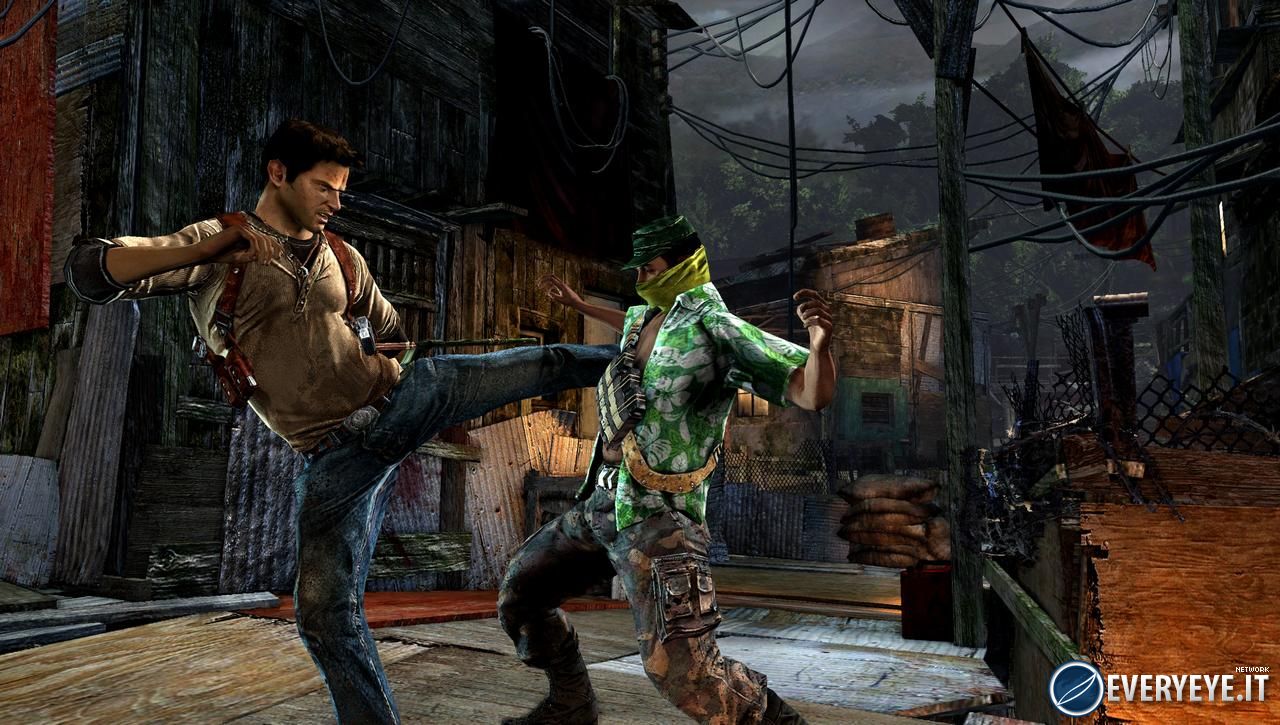 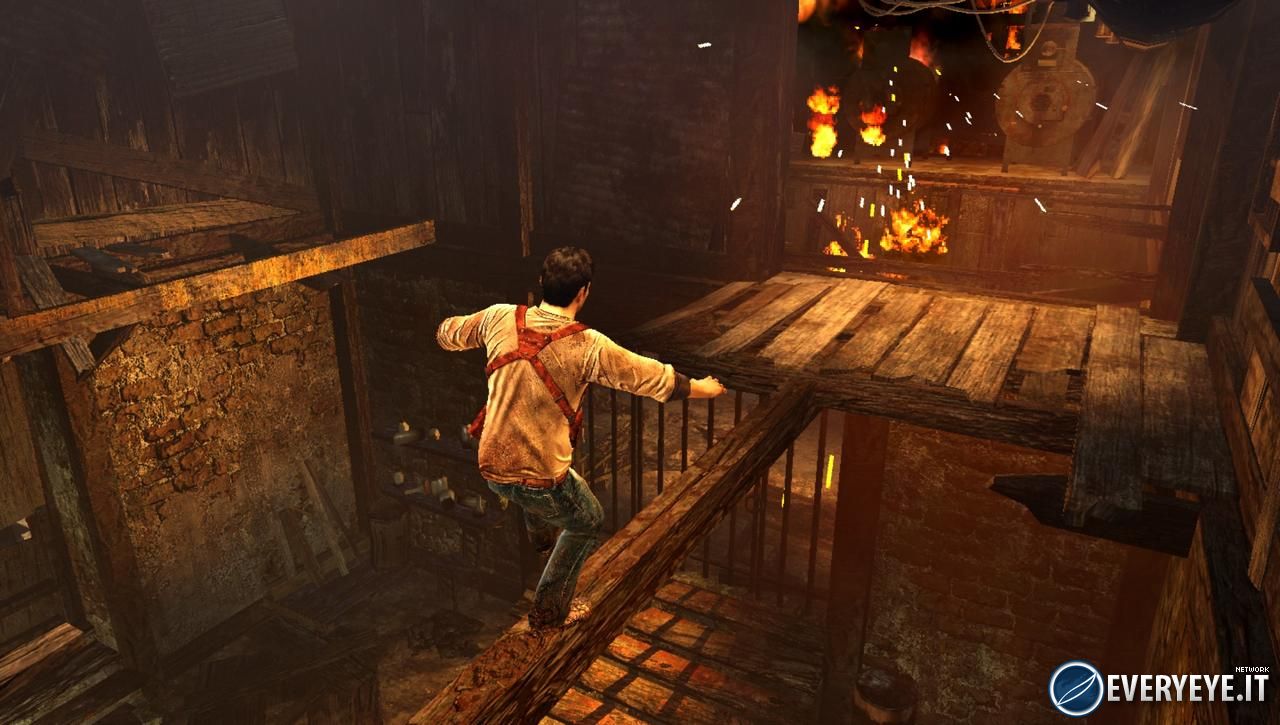 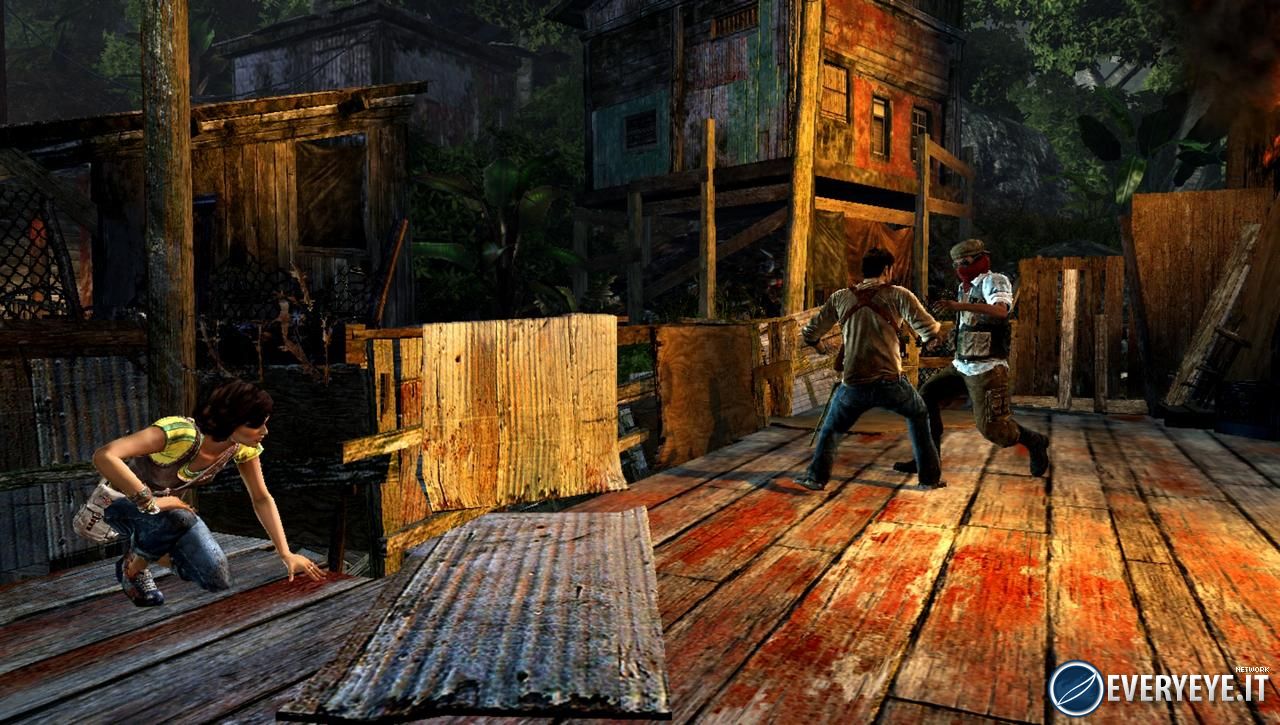 As part of my NGP demonstration following Sony's PlayStation Meeting 2011, I had a chance to try out the new Uncharted game being developed for the handheld. How does Drake's first handheld adventure feel with the addition of touch controls and aiming via the system's gyroscope? So far, so good.

My brief hands-on time with Uncharted on NGP was essentially the same portion of the game that Shu Yoshida demoed on-stage during the PlayStation Meeting.

It began with some simple platforming, climbing up some small ledges and over a downed tree. When using the regular game controls, Drake steers exactly like one of the PS3 Uncharted games, jumping, rolling, and shooting in basically the same manner. If you'd rather use touch controls, you can tap or swipe at certain areas on the screen to make Drake move accordingly. For example, tapping a nearby ledge will cause him to automatically climb up, while swiping across a ledge will make him shimmy in the direction that you swiped.

When I reached a vine, Yoshida showed me something that I hadn't noticed during the on-stage presentation: You can swing across the vine by actually physically rocking the PSP back and forth. It was a little difficult to get the motion right, but it's a cool idea.

If any of this motion or touch stuff sounds annoying to you, I have good news. As I had hoped when I saw it shown on stage, these alternate control methods are just that: alternate. If you want to swipe up and down on the rear touch pad to climb up a vine, you can, and it feels unique and kind of cool. But if you'd rather just stick to using the analog sticks and pressing X to pull yourself up a ledge, that works as well. As far as I was able to tell, that's the case for all of the touch and motion functionality in the game, though that could change before it's finished. Here's hoping it doesn't.

Touch controls are also used to stealth kill. As shown in the stage demo, if Drake is on a ledge below an unsuspecting enemy, you can simply tap the screen where the enemy is located to pull him down. Same goes for sneaking up on an enemy near a cliff and tapping the screen to push him off.

The biggest and perhaps most surprising test for me was the demo's finale: using the gyroscope sensor to aim a rifle and shoot an enemy from afar. When I saw this on-stage, I thought it looked gimmicky and terrible. After trying it...well, it's definitely still gimmicky, but I was shocked at how well it worked.The gyroscopes are clearly extremely sensitive -- a slight tilt can send your view to the far left or right. It took a moment to get used to that sensitivity, but within seconds, I was able to successfully line up a shot.

If there's one series that's always brought out the graphics freak in me, it's Uncharted, and it seems like the NGP version will be no different in that regard. The demo took place in a gorgeous jungle setting similar to some of the areas from the first Uncharted. I wouldn't say it was quite on par with the visual quality of that game, but it didn't seem far off. In particular, I was very impressed by the animation. As with the console version, Drake moves through the environment realistically, breathing heavily as he pulls his weight onto cliffs and slouching impatiently if you let the game idle.

Before I handed back the NGP, I made one final discovery in Uncharted that was not shown during the on-stage demo. During the PlayStation Meeting, Yoshida had demonstrated how players can use the gyroscope to look around in 360 degrees in Hot Shots Golf. As it turns out, this is also an option in Uncharted via what they're calling "camera mode." By tapping a camera icon in one corner of the screen, players will move into first person view, at which point they can twist and turn the NGP in whatever direction they want to look around the environment and take pictures. I'm hoping these pictures will be able to be used as backgrounds and shared with other users somehow.

I also asked Yoshida about the possibility of Uncharted NGP connecting with Uncharted 3 in some way, similar to how Resistance: Retribution on PSP connected with Resistance 2. Yoshida said connectivity functionality is present in the NGP, but they're not yet ready to discuss if or how it will work with any specific games.

Even in such a brief portion of gameplay, I can already tell that Uncharted for NGP is shaping up to be a fantastic early look at the device's potential and power. The game is being developed internally by Sony's Bend Studio -- the same team that made Resistance: Retribution and the PSP Syphon Filter games -- and Naughty Dog is overseeing the project to make sure that the gameplay and plot stay true to the series' high quality. If Uncharted ends up being a launch title for the NGP, it will likely make a very compelling argument on behalf of the new handheld.

We get on hands on a demo of Nathan Drake's Next Generation Portable adventure; touching and tapping ensue.

One of the games showcased for the NGP at Sony's PlayStation Meeting in Japan was a new entry in the Uncharted series. The eye-popping demo showcased the NGP's graphical muscle and its touch functionality. We were able to spend a little time with the demo of the upcoming game and tried to wrap our head around the fact that the incredible-looking game was running on a portable gaming device.

The demo let us play through the short sequence that Shuhei Yoshida showed off on stage during the presentation. The demo let us guide Nathan Drake through a series of environmental obstacles and deal with a few enemies before winding down the action with some photography. The demo opened with Nathan walking away from a jeep and heading off into a jungle. The early issues to be dealt with weren't too taxing--some running and jumping over obstacles were the biggest issues. Vine swinging required a little more effort, tilting the NGP to get a swing going, but it was manageable, and also served to highlight the stunning viewing angles of the NGP screen.

Enemies didn't appear to pose too much of an issue at first given the "touch to incapacitate" mechanic in the demo which brought up a small fist for you to tap on to take out enemies automatically. The touch mechanic also let us have Drake pick up a rifle towards the end of the demo as an enemy across a ravine opened fire. We got a taste of the gyro functionality in the device as we shifted our aim by physically moving the device. The gyro support was very responsive and worked best when we used smooth, deliberate movements which offered us very precise aiming. Once our enemies were taken out we were able to call up a camera mode, because why wouldn't Nathan Drake want to document his travels? This switched our view to a camera viewfinder, which used the integral gyros to move around, the front touch screen to zoom in or out. Once we hit the right shoulder button to snap our shot, we got a "camera challenge complete" message and the demo ended.

Control in the demo made use of most of the controls on the NGP, analog sticks, touchscreen, face and shoulder buttons pretty smoothly. Although the demo required us to hop between different control mechanics, buttons, touchscreen, gyro, everything worked well together and felt right. We're also happy to see that some of the touchscreen mechanics, such as jumping over objects, can be done with a button too, if that's what you prefer. At the same time we do have to say we like the idea of "swiping" to a location and having Nathan walk or climb there automatically.

The visuals in the demo were ridiculously close to the original Uncharted on the PlayStation 3. The environmental detail was very high, as was the detail on Nathan who animated smoothly. Texture quality was extremely sharp and further complemented by the NGP's screen which was stunning from any angle. Most impressive was the game's framerate and camera movement, both of which were very smooth. The most nitpicking we can do is call out some minor aliasing bits on some plants and an odd texture or two, which are things you'd have to be looking for. Other than that, the game looks like Uncharted on the PS3 which isn't too shabby for a first-generation showcase of the NGP's power.

Overall we're very impressed by the NGP's power and the potential of an Uncharted game on the system based on what we played. Though what we played was clearly a nascent slice of this new game, it hit all the notes we'd want an Uncharted game to on a portable system, right down to short bits of banter from Nathan as he goes about his business. While no release information has been given no Uncharted for NGP yet, plan on more from us as we get it.