April 6, 2009 - It's official: Eminem is back on the scene. Since going on hiatus in 2005, the prolific rapper has remained largely out of the public eye. But the past several months have seen Marshall Mathers begin to emerge from his solo sabbatical. And now, on the eve of the release of his first official single in years, the world is bracing for the triumphant return of Slim Shady.

Relapse, Eminem's first original studio album in over four years, drops on May 19 courtesy of Shady/Aftermath/Interscope. We don't know precisely what lyrical charms the record holds, but we do have an inkling of what to expect.

The first single, "We Made You" releases tomorrow (depending on when you read this), Tuesday, April 7th. The video will premiere on MTV at 6AM EST. Directed by Joseph Kahn, helmer of Eminem's Grammy-winning "Without Me" video, "We Made You" takes some not-so-subtle shots at celebrities. Maybe Tom Cruise? Official stills show Eminem and Dr. Dre, producer of the track and presumably many other joints on Relapse, in a casino dressed as Dustin Hoffman and Cruise's characters from Rain Man. 50 Cent also appears.

If you've already downloaded "Crack a Bottle," you may be wondering why that hasn't been mentioned yet. The track, which features Em, Dre and 50, was officially released as a digital download in February after an unfinished version was leaked onto the internet. And although, according to information released by the record label, it will appear on the upcoming album, it isn't technically Relapse's first single.
Believe it or not, those are the only two confirmed tracks for Relapse. Why don't we know more? Because of the astounding amount of material that was recorded for potential inclusion. Rumor has it that around 100 songs were collected, some previously recorded while in production on guest-appearance projects, and others exclusively for possible placement on Relapse.

Eminem recorded much of the album in conjunction with Dr. Dre at Em's recently purchased Effigy Studio in Detroit. Production later moved to Miami where the pair were joined by legendary Hip-Hop producer and frequent Em collaborator Jeff Bass. The second round of recording sessions, initially scheduled to last less than a week, supposedly went so well that they were extended to nearly half a year.

How is it possible that all that dopeness will fit on one record? Easy. It won't. Eminem is already working on a follow-up album, Relapse 2, that fans can expect in the second half of 2009.

"A lot of people were expecting Relapse to drop last year," Eminem says. "I was one of them. Then Dre and I went back in the studio in September for a few days, and that turned into six months. We were on such a roll; we wound up with a ton of new music produced by Dre. Putting out Relapse 2 will let everyone get all of the best stuff."

What more could Relapse or its sequel hold? Rapper T.I. may (or may not) make a guest appearance. He told MTV that he record three tracks with Eminem in 2007, one of which is about the pair's alter egos, T.I.P and Slim Shady. And hip-hop producer extraordinaire DJ Premier also worked with Eminem on a track called "Keys to the City," which may show up.

Other stuff we know: At least one song will deal with the death of Emimen's good friend, Proof, who was shot and killed in 2006. This was not long after Eminem admitted an addiction to sleeping pills, and saw his (re)marriage bust up. To say that Relapse was conceived during hard times is an understatement.

You might expect, given the aforementioned drama, to find Eminem in an even darker place on Relapse. But that's supposedly not the case. He's even gone on record describing the album as "more upbeat." "Within the last year I started learning how to not be so angry about things, learning how to count my ... blessings instead. By doing that, I've become a happier person, instead of all this self-loathing I was doing for a while," he says.

Will the rapper's personal transformation be fully reflected on Relapse? And, if so, will fans respond to an Eminem that keeps it on the positive tip? Or maybe the album title itself is intended to convey that Em has returned to his deviant lyrical sensibilities.

All will be revealed when Relapse drops on May 19. 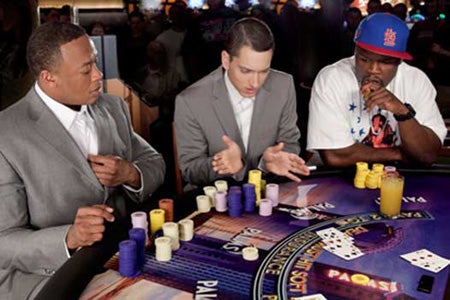 sisi piace anche a me

sisi piace anche a me