A fan once told me, "The reality in your games is what makes them appealing."

Until now, I had always planned for that to be my identity. However, lately I've come to think that it's time to give everyone a bit more of a window into my dreams. Just as we were enchanted by Galaxy Express 999 or Star Trek as children, now is the time to throw open the curtains to just as big a dream.

The dream began as an idea to rise away from the blood thirsty world and into space. The vast expanse of space is rife with Darwinism, and its raison d'etre may be even more blood thirsty. Should the setting be a star system? We could certainly make things realistic within those confines; however, they would still be too small. So then it should be galactic? Hmm. Coming and going from multiple galaxies would certainly fit the scale. Nope. We need to be able to visit every corner of space. Further... No, even further... We needed to go to the unseen ends of the universe.

The drive to explore the unknown has always been a catalyst of human development. So how do we tap into that desire?

If the main character is a mere human, there is no way he could emerge victorious by his own hands. He'd need to build a ship to transport himself amongst the stars. But he'd only be able to create something small. Becoming lost in the vastness of space, he should meet new people and experience new adventures, growing along with his ship in the process  from destroyer to cruiser, battleship to super-battleship. And he should be able to customize the interior, from the bridge to the cabin modules. There should be an infinite number of ships, each a different combination of exterior, interior, and personnel. And your numerous encounters should lead to an increase in skilled crew. Indeed. That is the very appeal of a battleship  the gathering of many lives locked together on a common voyage. If a game had all those elements, then it would live up to my definition of a "space battleship".

One day, Inaba-san came to visit, and I laid this concept out for him. He immediately told me to run with it. I fired off a mail to mecha designer Junji Okubo. He's always loved science fiction, so he was immediately on board. My next target was character designer Sawaki Takeyasu, who enjoyed the idea and gave me his OK. My old crew from Steel Battalion had formed the core for a new journey.

Now, my team and I are locked in battle, fighting to squeeze this enormous world onto a tiny DS

Infinite Line will be based on the novella "Childhood's End" by Arthur C. Clarke.

"There are two main [story] threads," Platinum Games told us. "One is a poor young boy who pulls himself up by his bootstraps, has no money. He gathers the money, the parts, and equipment he needs to become a space captain. Another thread gets into very high-level, philosophical science fiction stuff. [We are] fans of science fiction writers Arthur C. Clarke and Greg Egan. Humanity is made to observe and they are defining the physical laws of the universe through their observation. We want to explore the idea in the game and storyline that 'what if there are not alien species but different types of humanoid species who observe each other?' So that's where the themes of Childhood's End come into play. What is the real role of humanity? Why is humanity there to observe the universe?"

There will be a deep story that spans across two galaxies. Platinum Games says players will learn what it means to be human.

According to Platinum Games, the "graphics will blow you away. You will not believe this is being done on the DS." Characters will be in 2D, but ships, exploration, and battles will all be in 3D.

There will be Wi-Fi two-player battles with your friends and their spaceships.

The video began with a slow spaceship crawl reminiscent of the opening scene of Star Wars. Eventually the camera panned out to reveal many vessels traveling in space. A representative from Platinum Games explained that Infinite Line will allow players to captain a ship, "like Captain Kirk in Star Trek." There are two main features of Infinite Line.

First, players will be able to customize their ship. There are over 150 design models, and another 150 possible crewmembers. The innards of your vessel are modular and can be rearranged at will.

"All controls are with the touch screen. Because this is a spaceship you're not able to move completely in real time. You'll click your destination and click your engage button and your ships will start to move.

"A spaceship battle will pretty much occur in real time. There will be various parameters for your ship. According to these parameters you'll have what's called a 'command gauge.' This command gauge builds up and you can spend it to perform specific attacks during battle. For example, if you get some really great personnel on your ship, great pilots or whatever, they may be able to improve your command structure and your ship may react faster."

"We're probably talking 50-60 hours just to get through once. But if you want to do everything it will probably take you 100 hours."

Giocabile al TGS e in uscita in primavera in Jap

At Sega's Consumer Game Conference today, they outlined their strategy for the next few months and revealed the upcoming line up. They announced that the Platinum Games and Sega DS RPG Infinite Space will be playable at TGS, and will see release in 2009 Spring in Japan 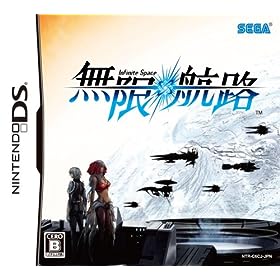